Fluffernutter Day is a national holiday, which means the world is inherently a good place. Anyone who has ever sunk their teeth into the gluttonous sandwich knows this to be true.

The Fluffernutter is a simple but relished childhood lunch classic, consisting of two pieces of white bread. One side is spread with peanut butter and the other with marshmallow "fluff" or cream -- a divine, gooey, sticky marshmallow-like mixture made of sugar, egg whites and more sugar. 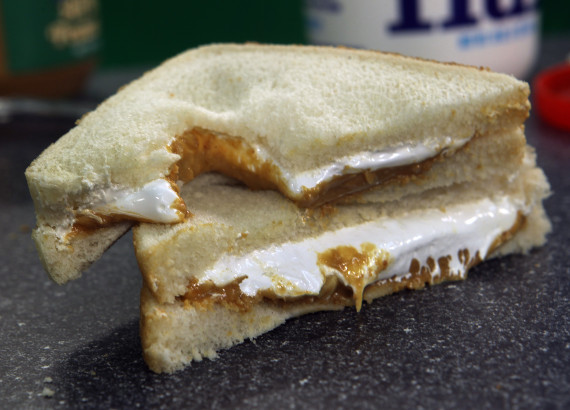 A beautiful thing happens when peanut butter's salty-savory flavor is combined with marshmallow's competing saccharine one. The sandwich was masterminded in the early 1900s in Massachusetts, and remains to be a nostalgia-inducer with every bite (no childhood should go experienced without at least a couple fluff sandwiches between the peanut butter and jelly ones).

Fluffernutters can and should be eaten on any given day of the year, but especially on National Fluffernutter Day, October 8, we salute the timeless sandwich that withstands both hot beach picnics (the melty marshmallow is part of the eating delight) and those rare, deserved snow days alongside a mug of hot chocolate. The following desserts pay homage to the magical food pairing in dessert form: