They've entertained and haunted us for most of our lives. You know who I'm talking about: clowns.

It doesn't matter if they're clown faces painted on black velvet or the inflatable version of Bozo the Clown that kids used to punch all the time (and be thrilled when the clown bounced back to an upright position, begging to be hit again). It doesn't matter whether you feel a perverse sexual attraction to Krusty the Clown whenever he appears on The Simpsons or have managed to develop a reputation among friends as the class clown.

From the early days of the Commedia dell'arte to the sophistication of today's Cirque du Soleil, clowning has developed a grand tradition of performance art. One of the most beloved clowns of all time was Emmett Kelly, who is seen below making a guest appearance on What's My Line?

Not all clowns are as lovable as Kelly's "Weary Willie" character. Some can be downright lethal. Consider this moment from 1998's comedy horror flick, Killer Klowns from Outer Space.

While corporate clowns like Ronald McDonald have often been used to build brand loyalty with children, they are hardly immune from satirists like the clown in the following video.

The Four Clowns troupe recently ended a summer tour to Phoenix, Chicago, St. Paul, and Indianapolis with appearances at the San Francisco Fringe Festival. While their style can best be described as aggressively athletic and hilariously inappropriate. the element of surprise kicked in way before the performance. As the audience entered the Exit Theatre, they encountered a handsome young African American man seated in front of an electronic keyboard who proceeded to "have at" a piano reduction of George Gershwin's Rhapsody in Blue.

What made Mario Granville's performance so interesting was not just the fact that he is the group's musical director. At the age of six, Granville became almost completely deaf. Following reconstructive surgery to fix his hearing, he began to teach himself to play the piano at the age of seven. By eight, he had developed a passion for Beethoven and begun to perform his music regularly.

By 10, Granville had composed his first classical song and, by 11, had begun to write longer pieces. Over the years (although he has never worked with a piano teacher), Granville has developed a style built on a combination of classical technique and what he describes as "inescapable present day modality shaped by a tumultuous emotionality." No amount of missed notes can hide his virtuosity. 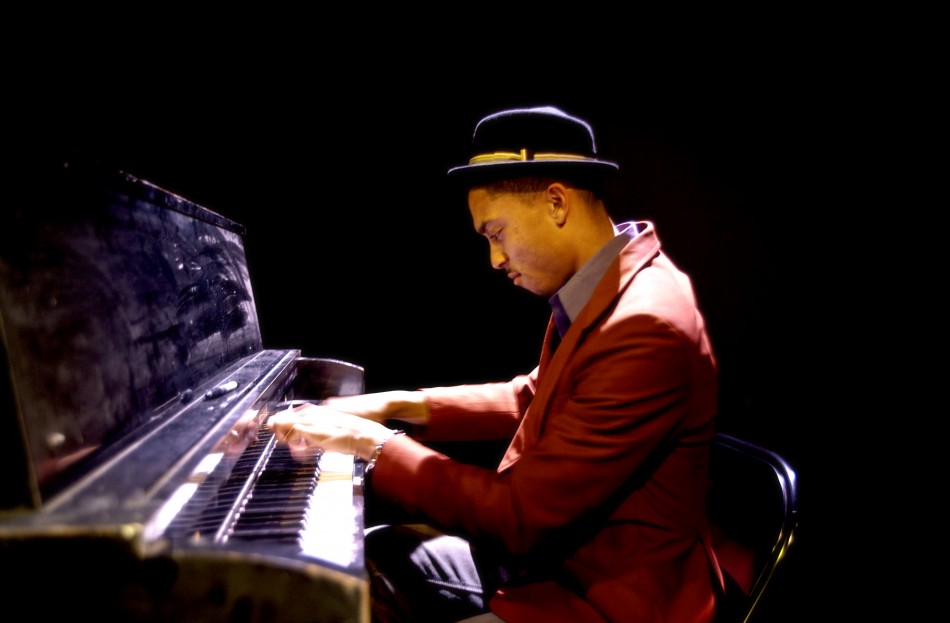 Conceived and directed by Jeremy Aluma, the structure of Four Clowns is simple. Four clowns enter onto a stage singing the refrain to a theme song. They are: 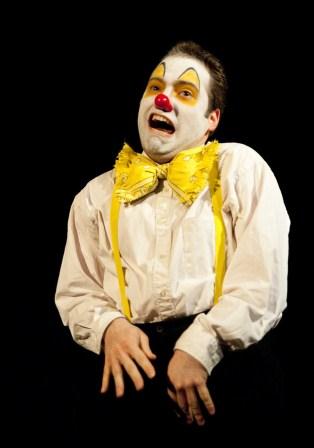 The promotional blurb for Four Clowns reads as follows:

"A physical, musical and emotional journey into what it means to be human. Follow four clowns -- sad, mischievous, angry, and nervous -- as they reminisce about their past. As the old adage goes, 'laughter is the best medicine.' But laughter comes most earnestly when reflecting on past sorrows. As the clowns tell their tales of woe and elation, from childhood to adulthood, we discover that they are all the same, and so are we. "

This is not, however, your typical clown act. As a nonprofit, the group's donor levels have been named in honor of Charlie Chaplin, Andy Kaufman, Yorick, Bill Irwin, David Shiner, and Slava. 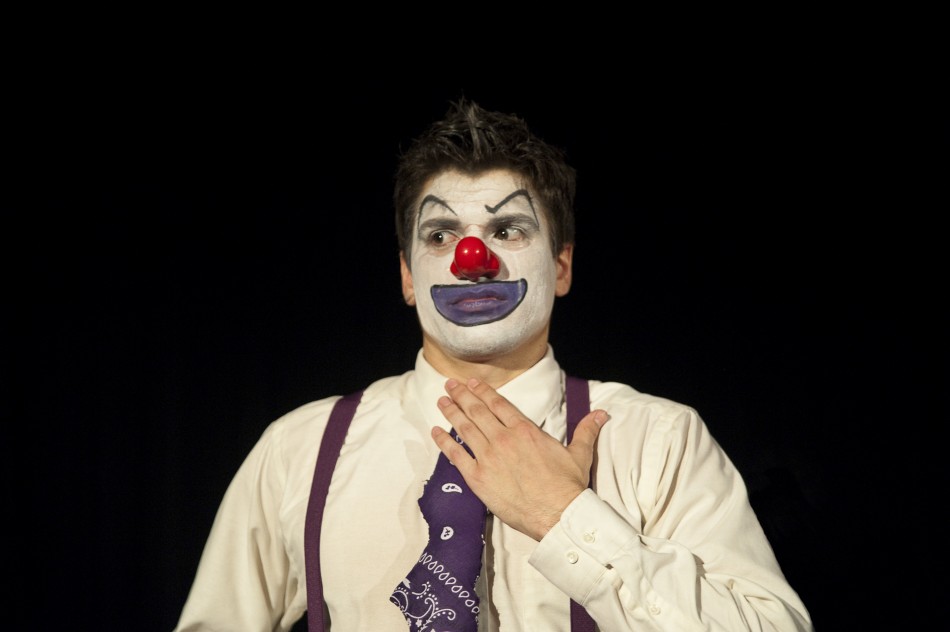 The Four Clowns show is broken into three segments: childhood, adolescence, and adulthood. Each segment contains several quick skits in which roles (father, mother, big brother, coworker, boss, etc.,) may be prewritten or arbitrarily assigned to any performer. The humor is fast and furious, sometimes almost ferocious in its execution.

At the performance I attended, one woman (who, as the audience later learned, had made a $200 donation to the troupe) got a lap dance from Angry Clown that had everyone convulsed in laughter. 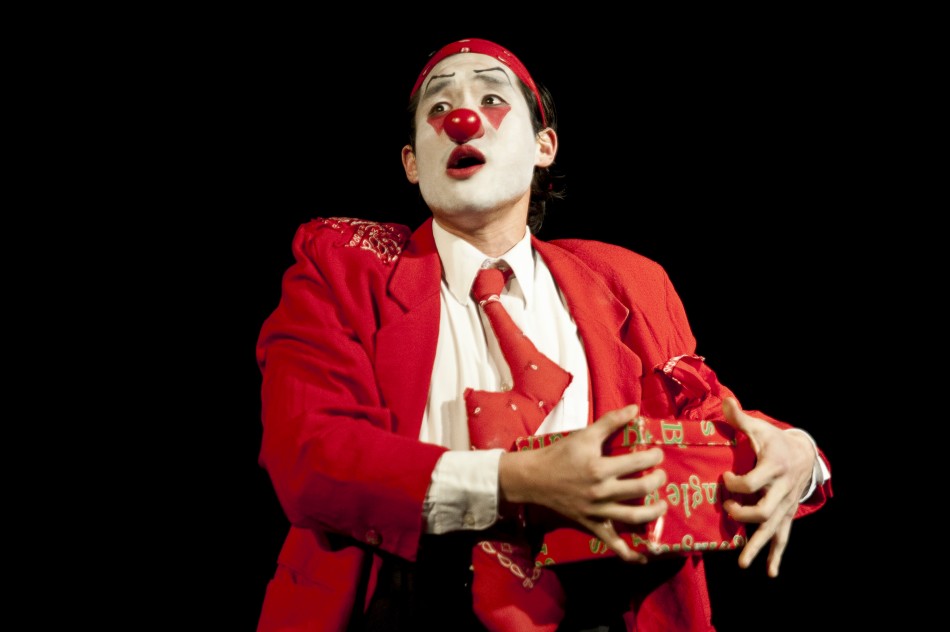 From start to finish, Four Clowns uses high levels of energy, physical dexterity, and laser-like wit to entertain its audience. During certain parts of the performance I attended, Sad Clown chose to commiserate with a member of the audience in order to remind people that being a clown isn't always as happy as one might imagine. (For a hilarious piece of writing, check out Alexis Jones's post entitled Clown Car Chronicles: I Hate Jerry Aluma.) 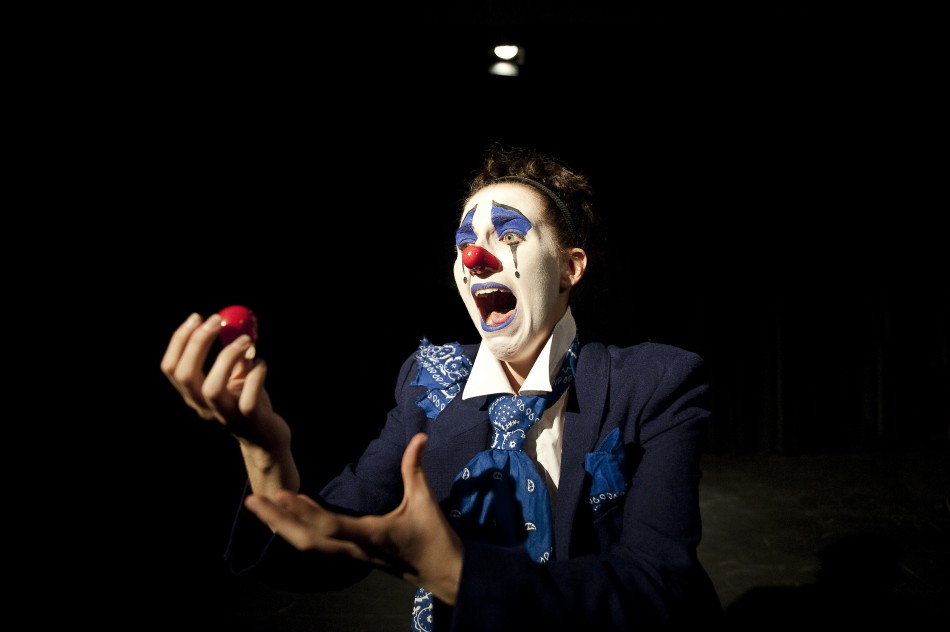 If I was more impressed by the work of Raymond Lee (Angry Clown) and Kevin Klein (Mischievous Clown), that's only because at such a high level of craft and aggressive energy, they stood a hair's breadth above Alexis Jones (Sad Clown) and Amir Levi (Nervous Clown). The bottom line? There is no holding back with these four performers. I eagerly await a chance to see their production of Four Clowns: Romeo and Juliet.

The show that might have gotten the strongest buzz at the Fringe Festival was Submarine (which won the Best of the Fringe Award, the Techies Award, and sold out two of its four performances). Starring Slater Brooks Penney and Jaron Aviv Hollander as two clowns working aboard a submarine, it kept its audience in stitches for a solid hour. 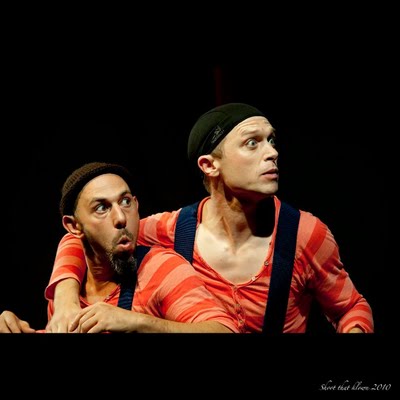 Although introduced as two of the loudest and noisiest mimes in existence, Penny and Hollander went far beyond standard mime work. Whether escaping from a submarine that seemed to have crashed into a reef, confronting blowfish and other strange creatures, or setting foot on land -- only to encounter tree-climbing monkeys, proudly strutting peacocks, and God knows what else -- these two artists showed a mastery of physical comedy that was not just inspiring, but occasionally downright scary. 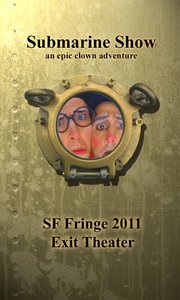 Slater Penny's career track includes everything from performing at Burning Man to working with Lunatique Fantastique; from participating in Crucible's Fire Dramas to working with the monkey chant/Gamelan troupe named One People Voice Company. A founding member of Berkeley's Impact Theatre and Mendocino's Flynn Creek Circus, Hollander is also the founding artistic director of Oakland's Kinetic Arts Center. As a team, they bring a formidable toolbox of performing skills to the stage.

The following clip, recorded during a Clown Cabaret at the Climate Theatre, barely gives an inkling of what Submarine is like. You really have to be in the audience to appreciate the full experience!