Original "X-Men" member Iceman comes out as gay in the latest issue of the Marvel comic, which debuted online and in stores Wednesday. Graham took to Facebook on the day of the release to criticize Marvel.

Today the Marvel comic character Ice Man, from the “X-Men” series, is coming out as gay. This is another attempt to...

Graham is the son of Billy Graham, an Evangelical Christian and missionary and an outspoken opponent of gay rights. Although Graham was against Marvel's decision to make Iceman gay, most people have responded positively, according to Marvel Comics Editor-in-Chief Axel Alonso.

“We look at this as being one shading of who he is,” Alonso told MTV News. “I think, personally, that it is going to deepen the character, and humanize him even further, and make for fascinating stories. By that I am not saying you are not going to recognize Bobby Drake anymore. If you were a fan of Bobby Drake before, if you cared about him, I think this will draw you closer to the character, not push you away from him.”

In #40, telepath Jean Grey reveals Iceman's sexuality to his teenage self. Grey then teleports back from the past to tell present-day Iceman, who up until that point identified as straight, what she discovered.

"Maybe he couldn't handle being a mutant and gay in a society that had issues with both, and one is easier to 'put away' than the other," elder Iceman says, per Rolling Stone, before adding that he is "full gay."

Take a look at the pivotal scene below: 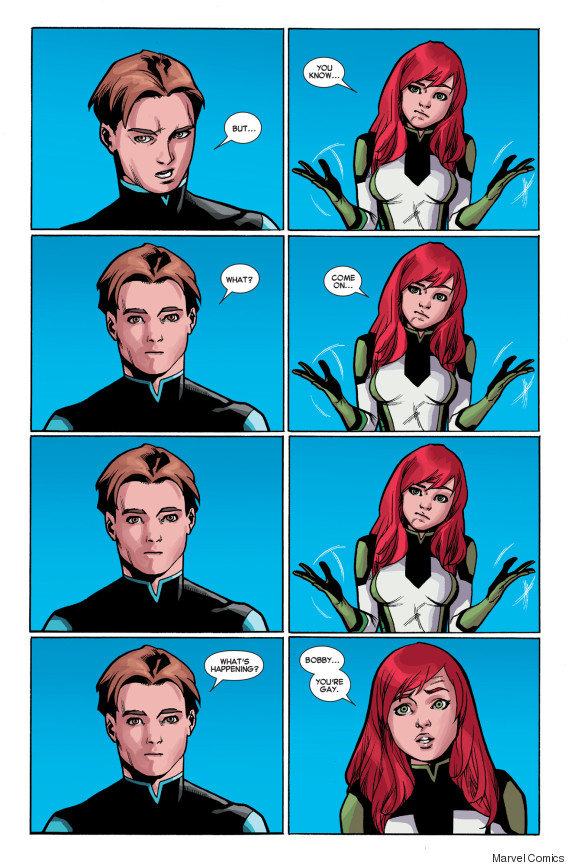