On the evening of Tuesday, August 11, BBC Media Action Libya and the UNDP Libya Mission hosted a group from the Constitutional Drafting Assembly (CDA) in a conversation about the current progress of the development of the constitution. Amid political resignations, peace talks and pro-Qaddafi rallies, members of the CDA met with Libyan media, activists and constituents alike in an interactive panel discussion. Guests in the audience and panel members engaged in a passionate debate, which was striking for both its peacefulness and democratic nature.

BBC Media Action Libya began the night with a presentation about their activities. The BBC team has been working for the past year in Tunisia after relocating from their office in Tripoli due to the increasingly chaotic situation. BBC Media Action brings together experts in the media field with young Libyan news professionals. The Libyans are trained in all aspects of news production, so that the country of Libya going forward will have a constituent of professionally trained, objective journalists and television producers. The British trainers have guided the young Libyans for the past year in Tunisia, with some notable achievements. The Libyan team produced Libyan Salon, a Libyan Arabic talk show, which brought in Libyan activists and politicians for interviews in order to raise awareness about the current constitution-writing program. The team, led by web designer Feras Saleh, also created Dustour J Wagtah, a mobile application designed to facilitate communication between Libyans and the constitution writers. 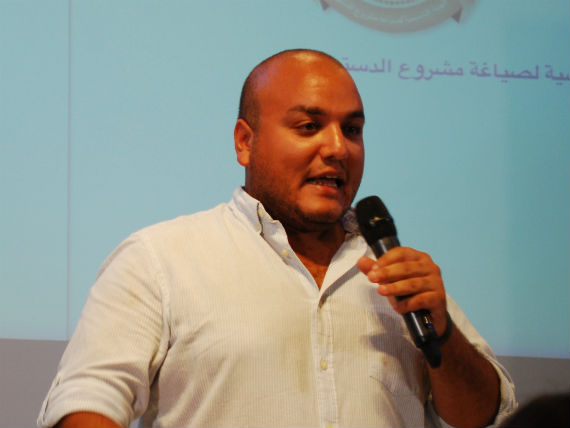 The significance of the work being done by the BBC team is representative of the overall purpose of the conference. BBC trains leaders of the Libyan media so that Libyans themselves have more capacity and expertise in producing the news. Libyan Salon, in particular, rises above the divisive politics ruling the day in Libya. In relation, the Tuesday conference itself brought Libyans together in a peaceful manner, so that they could voice their opinions freely and democratically.

The night was a large success. Ironically enough, in the invitation to the program, the BBC team noted in both Arabic and English that "no weapons were allowed" on the grounds. With an initial message like this, one might easily assume that they would be attending a conference led by warlords and Islamist militiamen. However, the conference was anything but that. Members of the CDA updated Libyan audience members on what progress had been made so far. They conceded that most Libyans are unaware of the constitution writing process, although it has been ongoing for one year and four months. They generally agreed that a new constitution is needed in the future, but the timing and form of this new constitution was passionately debated. Ahmed Gaddoura, a member of the panel and Libyan civil society activist, who closely follows the developments of the CDA, exclaimed that "now is not the right time for the constitution. There is war! How can we implement a new constitution, let alone hold a national referendum in a warzone." His comments garnered much disagreement from the audience and from other panel members. One woman from Benghazi, an eastern city in Libya, expressed her belief that "water and electricity are important, but we also need a constitution. We need to regain our political livelihood."

Although her concerns were received with sympathy from other audience members and panelists, Libya is a large country, with starkly different situations from one city to another. Based in Tobruk, General Khalifa Heftar and his army continue fighting against the Tripoli-based Libyan Dawn Movement, an Islamist militia with its own corresponding political wing. In addition to worrying about these two sides, many Libyans are also nervous about the looming threat of ISIS. Asma, a citizen of Sirte, a city controlled by ISIS, told the panelists that in the past year, the security situation has deteriorated significantly. In fact, the panel noted that not elites, but the majority of Libyans are suffering from the civil war. Another member of the audience, a journalist herself, also expressed great concern about the evaporation of media institutions from her hometown of Tripoli. She hopes the new constitution will "enshrine the rights of media" so that future assassinations of media personalities will not occur. 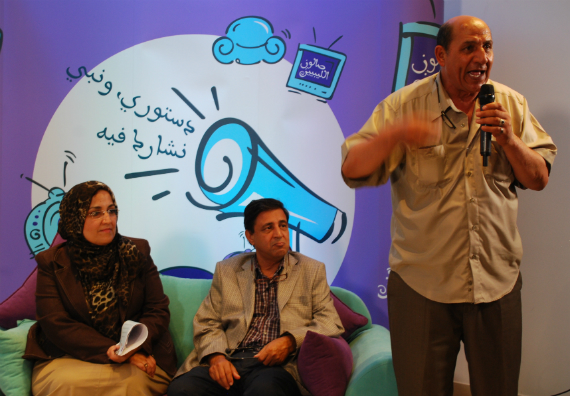 Panelists listen to a speaker at the conference Photo Credit: Conor McCormick-Cavanagh

Even with his country filled with chaos, the panel's host Rabia "Rio" Dhan expressed great hope after witnessing such an active discussion, which is "proof that Libyans still care." Significant organizations in the international community have invested themselves in Libya's successful transition. The United Nations Development Programme (UNDP) has been and will continue to be closely involved in supporting the CDA in its crafting of the constitution. Adam Styp-Rekowski, Project Manager for Constitutional Dialogue expressed pleasure at the success of the event and said that the UNDP's job is to "build the capacities of the CDA and civil society so that better communication happens between the constituents and those writing the constitution." He believes that women and youth are key to this process and that transparency is a key determinant of the integrity of the CDA's work. He noted that neither the UNDP, nor BBC Media Action attempts to brand these programs and activities as their own. They are "made by Libyans, for Libyans," which helps defuse any accusations of any extra influence from external, non-Libyan actors.

BBC Media Action Country Director Anne Reevell expressed elation with the success of the night. She noted that it was "wonderful to see Libyans having constructive, passionate conversations." She sees their hunger for such constructive discussions and believes they could have "gone on for a couple more hours." According to her, "they are crying out for both peace and a framework," which she thinks are both slipping out of their reach. She blames the current political climate in Libya for dividing the country into different sides based on political and regional affiliations; yet, the event did include people from all around the country, even the oft neglected south of Libya, thus illustrating that unity is possible. 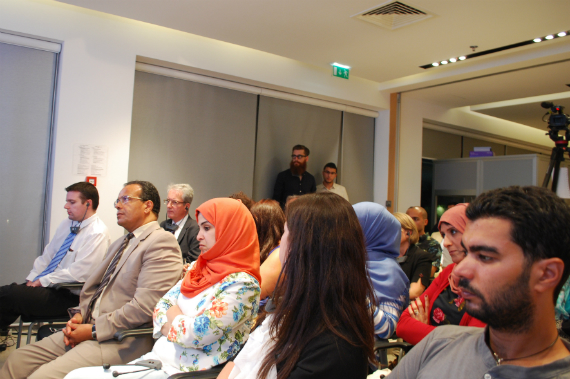 Tuesday's event demonstrated that Libyans are still committed to a successful and peaceful democratic transition. Amidst pro-Gaddafi demonstrations, which gather people nostalgic for the stability of the past, some Libyans still continue to push for more than just stability. They want a fully democratic society, even if the journey to get there is a long and arduous one. Hopefully for these passionate Libyans and the generations following, they will reap the benefits of their efforts.