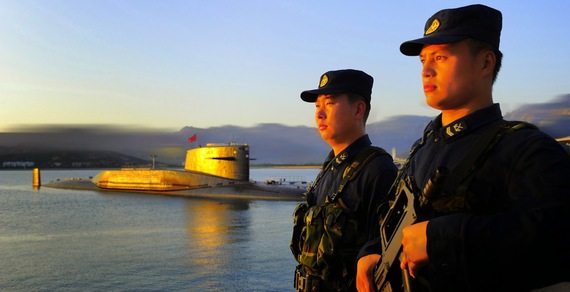 Now Beijing wants to do for freedom of navigation in the South China Sea what it has long done for freedom of speech on mainland China: Suppress, deny, and obliterate it.

Beijing's "closed sea" position as it harasses American warships and planes is this: The 1982 United Nations Law of the Sea Treaty established 200-mile Exclusive Economic Zones. Within these EEZs, Beijing insists that foreign shipping - both commercial and military - has restricted access.

Never mind that the Law of the Sea Treaty conveys no such rights - it is very clear on this point. That hasn't stopped Beijing from using its growing military might to assert its bogus closed sea claims. However, if such a twisted definition of freedom of navigation were adopted, it would effectively close the Asia-Pacific to the US military and constrain two-thirds of global trade routes.

The question for this year's bumper crop of presidential candidates, of course, is this: Should America simply retreat back to Hawaii in the face of Beijing's pressure and in deference to a Rising China? Alternatively, should the US take all necessary steps to maintain freedom of navigation in the Asia-Pacific and thereby increasingly risk a "hot war" with its largest trading partner?

#14 Freenavigate from Peter Navarro on Vimeo.

The neo-isolationist case for retrenchment back to Hawaii is certainly seductive to a war-weary American public after failed campaigns in the Middle East and Afghanistan that have squandered billions of dollars and taken thousands of lives. So why expose this nation to unnecessary risk by sailing "freedom of navigation" patrols as America is now doing, thereby antagonizing a country that holds over two trillion dollars of US debt?

In fact, I posed this question to experts I interviewed for the Crouching Tiger book and companion documentary film. Says Michael Auslin of the American Enterprise Institute on the slippery slope of unilateral withdrawal:

On the other hand, almost immediately we saw the Chinese begin to become much more assertive about their territory; and over the period of 20 years, [they] have moved to a position where they are de facto taking over islands that are disputed with other countries.

So we simply have to ask, and maybe we don't know the answer: What's the red line? How far do you want to go before you say, you know what: things have changed. And that's a question we always face. We faced it in Europe in the 1930; we let a ton of territory go before one day we said, this is the red line. Maybe the same thing will happen in Asia. Will it be more difficult because of economic interdependence? Sure. But that's what we also said in 1914. We said the world can't to war. Europe can't go to war; it's too economically interdependent; and then we slaughtered ourselves for four years. And then we did it again twenty years later.

On the economic risks of acceding to China's "closed seas" view of the Asia-Pacific, Princeton's Aaron Friedberg had this to say:

Asia is increasingly the engine of world economic growth, and the United States has enormous economic interests and interests in maintaining its access for purposes of trade and investment. Asia is a major source of resources as well as markets. Increasingly, it's the center for the development of new technologies. If the United States were excluded from Asia and, in particular, if Asia were to be dominated by a country with hostile intentions or with interests that converge dramatically from our own, this would be damaging to our strategic interests as well.

In this strategic dimension, the abiding fact here is that we are in an age of supersonic ballistic missiles; and nuclear warheads shot from the silos of China's Great Underground Wall or from the hills of North Korea can now reach Portland, Minneapolis, or Baltimore in minutes. As Michael Green of the Center for Strategic and International Studies reminds us:

To author Gordon Chang, "America's first line of defense is not Alaska and California but rather South Korea and Japan and Australia and Guam." These forward bases play important roles in an early warning matrix that helps the US missile defense system detect incoming threats.

For all of these economic and national security reasons, it is important that each of the 2016 presidential candidates weigh in on the freedom of navigation issue. Let the debate now begin.
___________________________
Peter Navarro is a professor at the University of California-Irvine. He is the author of Crouching Tiger: What China's Militarism Means for the World (Prometheus Books) and director of the companion Crouching Tiger documentary film series. For more information and to access film interview clips, visit www.crouchingtiger.net or see his book talk on CSPAN2.