Walt Whitman was born on this day in 1819. His lifespan overlapped with a period in neuroscience history that laid the foundation for today's exciting time of brain exploration. For example, in 1854 when Whitman was 35 years old, Emil Huschke produced the first lithograph of the human brain. Just one year later, Pierre Gratiolet proposed a strategy for how to demarcate the lobes of the human brain that is similar to how they are defined today. Though he would likely roll over in his grave at the word listicle, here are three ways Whitman is historically linked to the brain:

1. Bumpology. Whitman's writings are littered with references to the brain and especially phrenological terms. Phrenology (or 'Bumpology') was that fad of a science in the 1800s in which some dude would run his fingers through your hair and over your scalp, and then, all of a sudden, chart out your character and personality traits based on the protrusions, or bumps, of your skull. Whitman had his own bumps charted by Lorenzo Fowler. The map of Whitman's chart of bumps was printed in the Brooklyn Daily Times in 1855 - around the same time that the pioneering works from Huschke and Gratiolet were being published. A year later, the second edition of Whitman's monumental work, Leaves of Grass, was actually published by Fowler and Wells - yes, the Fowlers not only read heads, but also published books, which generates a direct link between Whitman's poetry and the history of neuroscience. 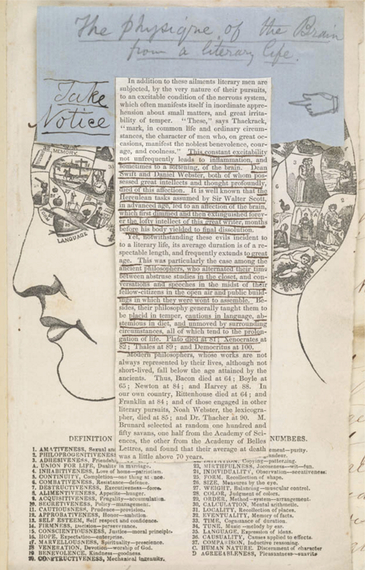 2. Broken brains. In a previous post, I mentioned how Burt Green Wilder collected and studied brains. Wilder's Cornell Brain Association was independent of the American Anthropometric Society (AAS), but the AAS had a similar goal of examining brains after death. In a 1907 paper, Edward Spitzka (whose father was a founding member of the AAS) describes the fate of Whitman's brain:

'The brain of Walt Whitman, together with the jar in which it had been placed, was said to have been dropped on the floor by a careless assistant. Unfortunately, not even the pieces were saved' [pg. 176].

Like all good conspiracies, Whitman's involvement with the AAS and the perpetrator responsible for the destruction of his brain are still debated. For example, just two years ago, an academic paper was published pointing fingers at Henry Cattell (who removed Whitman's brain from his skull), not a lab assistant, for allowing Whitman's brain to slip through his fingers. Regardless of who is at fault, the weight of Whitman's brain was recorded and is included in an empirical paper that is directly linked to an interesting mystery in neuroscience. 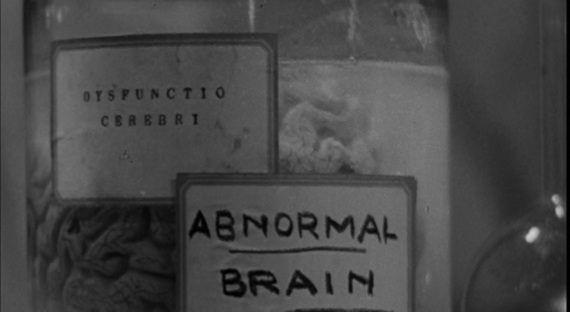 Screengrab of the 'abnormal brain' from 1931's Frankenstein, which the story of Whitman's brain is rumored to have influenced. Source: http://ourcynicalomelet.com/wp-content/uploads/2015/11/AbbySomeone1931.jpg

3. Frankenstein. The first edition of Frankenstein was published anonymously in 1818, the year before Whitman was born. As told by Burrell and later recounted by Haven, the brain is an afterthought in Frankenstein. However, there is a clip in the 1931 Hollywood re-make of Mary Shelley's novel that oddly resembles the tale of Whitman's broken brain. Specifically, Fritz grabs one of the brains labeled 'normal' after a lecture and then drops it after being startled. Since it is destroyed, he is forced to grab the brain labeled 'abnormal.' Collections of brains in jars were not fashionable until the late 1800s, far after the time that Shelley wrote the novel. Because (a) Fritz is Dr. Frankenstein's assistant and (b) the 'normal' brain crashes to the ground in a similar fashion as the descriptions of Whitman's brain, both Burrell and Haven suspect that the stories about the destruction of Whitman's broken brain inspired this scene in Frankenstein.

During his life and long after his death, Whitman remains closely entwined within the stories of neuroscience. And while brain mapping today has no relation to the phrenology of yesteryear, considering Whitman's deep and abiding interest in the brain, I don't think it would be surprising to find him volunteering to have his brain scanned. I imagine he would be keen to gain further insight into the neuroanatomical substrate contributing to the songs of himself. So, from one Jerseyan to another, Happy Birthday, Walt!

Kevin S. Weiner is a neuroscientist, as well as member of the Organization for Human Brain Mapping (OHBM) and writes for the Communications/Media Team. The OHBM Media Team brings cutting edge information and research on the human brain to your laptops, desktops and mobile devices in a way that is neurobiologically pleasing. For more information about brain mapping, follow www.humanbrainmapping.org/blog or @OHBMSci_News