Cristin Lind couldn’t find the words, so she drew a picture.

The artistic inspiration hit about a year ago, after she’d been asked to speak to a meeting of primary care physicians, telling them what it took to manage the complex care of her special needs son. Her page was still empty, despite hours trying to collect her thoughts, so she found some colored markers and began drawing circles.

Inside a small purple circle, smack in the middle, she placed a G, for her son Gabe. “He’s not always the center of the universe,” she says with a smile. “But for these purposes he was.”

Around him, she drew another purple circle containing the rest of the family: Cristin, her husband Dan, and their daughter, Dagny. She built outward from there: the health care providers in blue -- pediatrics, endocrine, cardiology, orthopedics; school-related specialists in red -- everyone from the teacher to the bus driver to the special education director; turquoise for the world of advocacy and support groups; pink for recreation; lavender for those who do the assessments and testing; orange for those who help fight against the rules and for the money.

We each have scaffolding in our lives, usually unseen. We are surrounded by a web we don’t always know is there, but every so often -- usually in crisis or its aftermath -- makes itself visible. By the time Lind finished drawing, there were 70 labeled ovals on her page, which she calls “Gabe’s Care Map.”

She felt overwhelmed, yet empowered, just looking at it.

There is a fable, known to every parent of a special needs child, about a couple who heads off for a dream vacation in Italy, but somehow the plane takes them to Holland instead. In the tale, Italy represents the typical experience of raising a child, and Holland is where you find yourself when something goes wrong. The moral of the story, as originally written decades ago by Emily Perl Kingsley about her son with Down syndrome, is that Holland is different, yes, but can be lovely once you stop pining for Italy.

True, Lind says. But you can’t possibly come to appreciate Holland until you first realize you are there. And for the Lind family, as with so many whose children are born with issues that do not stand up and introduce themselves from day one, but rather unfurl only over time, that realization can take years.

For a while, she lived the fairy tale, meeting Dan Lind when she was a 16-year-old exchange student in Sweden, marrying him seven years later. They moved to Boston, where he worked in high tech, she in fundraising, and soon began trying to have a family. It took six years, through in vitro fertilization cycles, miscarriages and an ectopic pregnancy. So when Gabe was born, in July 2002, Cristin and Dan thought he was their happy ending. “I had a wonderful pregnancy, the birth was really peaceful,” she says, “and I remember thinking we’ve paid our karmic dues, the hard part is over, now we ride off into the sunset.” 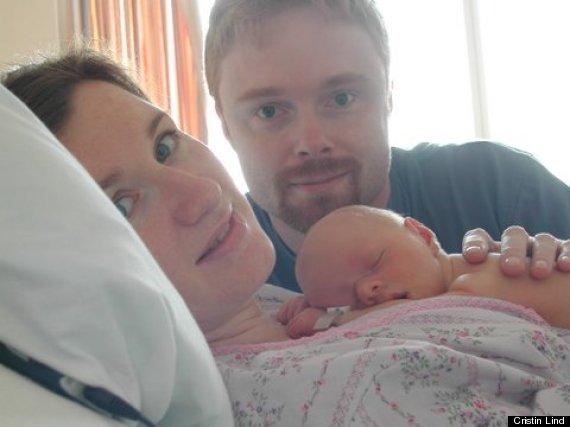 They didn’t. At the three-month checkup, the pediatrician noticed Gabe’s head was “a little wobbly,” leading a neurologist to note that “his muscle tone was very low.” At 6 months, the pediatrician heard a heart murmur, the pediatric cardiologist diagnosed mitral stenosis, and now there were regular medications in Gabe’s life. He fell off the growth curve, which led to questions about his ability to swallow, and soon an occupational therapist came to visit once a week and help him strengthen the muscles in his mouth. By the time he was a year old, a physical therapist, a speech therapist and several others had joined the team.

“But my denial was such that I never put it all together,” Lind says. “Never said the heart, the low muscle tone, this could be a problem. I figured we’ll fix the heart, he’ll be on meds, he’ll catch up, then we’ll go on.”

She and her husband had always hoped to have two children two years apart, and it didn’t occur to either to change the plan. Cristin Lind became pregnant easily the second time, and after giving birth to Dagny in 2004, she left her job and founded a time-management consulting company while also supervising her son’s growing team. Over the next few years, Gabe’s many complications were given more than one diagnosis, and by the time he started a special education program at a suburban Boston school, the Linds had been told he had a genetic disorder known as Noonan syndrome.

Other realities were making themselves clearer, too.

Cristin and Dan had always assumed they would have an egalitarian marriage. They had a head start, she figured, because Dan grew up in Sweden, where equally shared parenting is the assumption, not an aspirational construct. But as Gabe’s care came to include more moving parts, Cristin Lind was coming to wonder if down-the-middle division of labor was possible when one child required a full-time parental case manager.

“Shared parenting was the model we always thought we would have,” she says, of the dawning realization that hers was a marriage with one provider and one caregiver. “But when there is so much information to synthesize and hold? It’s not practical for two people to be primary on that.”

Her business was thriving, and she loved her work. But at the start of 2011, she sold her company to a colleague and “worked full time at figuring out what Gabe needs.”

The Hindu goddess Durga is Cristin Lind’s patron saint. Legend says Durga's job is to fight chaos on earth, and paintings show her with a half-dozen or more arms, each holding a weapon. Seated on a tiger, she “always looks really patient,” Lind says. “Replace her sword with a smart phone, her bow and arrow with a set of car keys, her staff with a binder of individualized education programs and medical records, and what special needs mother wouldn’t recognize herself in this ancient, over-caffeinated, over-achieving righteous mama?

After selling her company, Lind set about assembling her own arsenal. For quite awhile, she’d wondered whether Gabe was making the progress that he should in school, but “I didn’t even know how to go about answering that question,” she says. “The school district never denied any services we asked for, but that made me think maybe I wasn’t asking for enough.”

So she began to ask. She hired an educational consultant and an educational lawyer. She attended weekend seminars held by the Massachusetts Families Organizing for Change, and learned about available resources and rights. She arranged for a new round of neuropsychological evaluations, which showed regression, rather than progress, in her son’s cognitive development and which led, in turn, to a new diagnosis, the even rarer Coffin-Lowry syndrome.

Her research led her to find Gabe a new more specialized school, and to hire a personal care attendant for several hours every afternoon, paid by a state program she hadn’t known existed. The more intensive school program plus the additional hours of work with a professional after school have led to slow improvements.

“He can dress himself now,” Lind says. “Not completely -- he can put his socks on, but we have to make sure the heels are facing down. He can put his pants on and pull them up. That took such a long time.” Most recently, he is toilet trained, and he is increasingly able to be understood. “Last weekend we went out to a restaurant and asked the waitress for ice cream with sprinkles,” Lind says. “My mother-in-law started to cry. She had never seen him able to communicate with someone who doesn’t know him very well.”

As Gabe has changed, so has his mother. She went back to school and completed a fellowship at Boston Children’s Hospital in health advocacy, and now works for the Federation for Children with Special Needs, sharing what she’s learned. Part of her learning, and teaching, is her care map, scribbled at her dining room table. 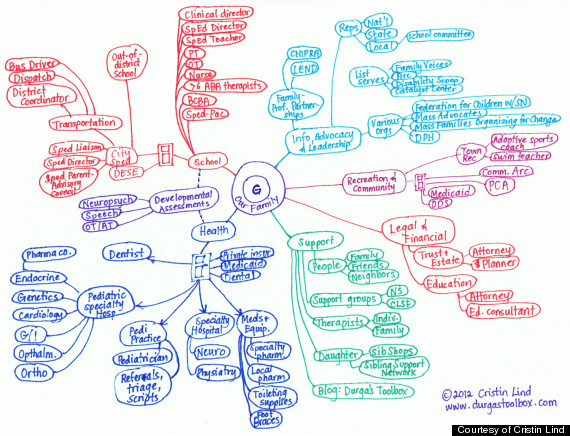 After completing it, she began to show it to the people who were on it -- doctors, therapists, a medical student who began following Gabe’s case. “It felt as if they treated me with more respect when they could see how many balls I was juggling,” she wrote in a blog post about the map. “One doctor helped me prioritize upcoming appointments, once she saw what we were dealing with. In one case, one said that they felt humbled to realize that all this time they considered themselves so central to my son’s care, yet there were so many other people in his life who were doing just as much.”

Lind also also began to show the map to other families, who began making maps of their own. “I couldn’t do it on one page no matter how small I drew the circles,” a reader, laurimedeiros, wrote on Lind’s blog. “So I decided to do it on a power point. It has been a revelation.”

Mostly, though, Lind says she learned about herself. Seeing the 70 colored ovals, each representing an area of care she was expected to understand and coordinate, helped her see her life with new clarity. “No wonder we had so many piles of unfolded laundry,” she jokes.

More seriously, she continues. “Sometimes you can’t see your life until you step away and look.”