Older students are less confident than younger students that they will land a good job upon graduating, says a Gallup poll released Tuesday.

The Gallup findings, which are based on Web interviews with more than 800,000 middle and high school students during October 2014, show that between fifth grade and senior year, students become progressively less likely to report that they feel optimistic about their future job prospects. This trend is especially pronounced among female students. Gallup found that in fifth grade, 70 percent of girls and 67 percent of boys are confident they'll find a good job once they graduate. Among high school seniors, though, only 46 percent of girls say they think they will find a good job, compared to 50 percent of boys, as shown below: 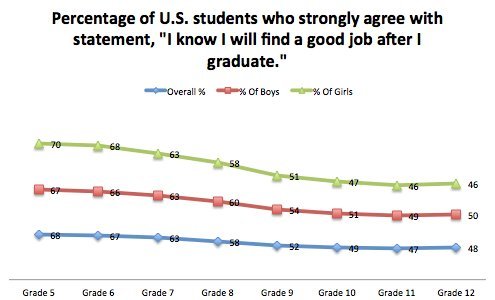 The Gallup brief does not explain what might account for the lower levels of optimism among older kids. However, according to the brief, previous research from the organization shows that less than 10 percent of middle and high school students are currently interning with a professional employer. Additionally, previous research shows that college graduates who indicated that they had interned during college in a field relevant to their studies were more likely to be employed and engaged in their job upon graduation. Because of this, the authors of the new brief conclude that "American educational institutions and employers have room to improve by providing more real-world work experiences for students."

Unfortunately, students may not be totally off base about their prospects of landing a job they want. In a 2012 LinkedIn survey of about 8,000 professionals, less than 30 percent said they were in their dream job. Similarly, only about 30 percent of all U.S. workers report feeling engaged in their work, according to Gallup research published in September.