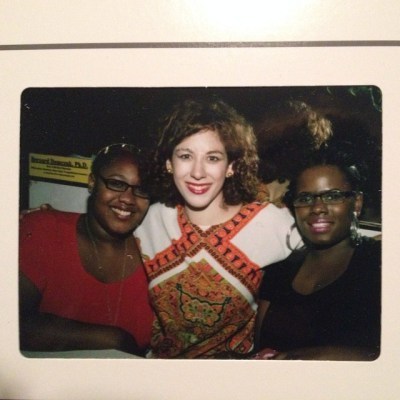 When my phone began blowing up with rainbows, I knew gay marriage had been legalized. But I was at a Catholic school that morning. Only a few moments before, I'd been delighted to see all kinds of children playing and singing together. This is where happy kids were taught to accept everyone -- or nearly everyone. My chest tightened as I realized I would have to wait to express my glee. I stopped talking to the children, afraid they would read concern or nervousness in my face, and when I talked to the adults, I stuttered and stumbled. My plan to maintain my composure was not working.

When I hopped into my car, my muscles finally relaxed again. Now I could be real. Free from scrutiny, I texted, liked, and shared my fingertips into elated exhaustion. My Facebook feed was more colorful than I'd ever seen it. I even saw a couple of engagement announcements and proclamations from acquaintances I never knew were gay.

That night, I pulled on my most colorful tunic and met up with a couple of friends in Washington, D.C.'s U Street corridor to celebrate. U Street is always bumping on a Friday night, but this night was particularly festive and with all the rainbows in sight, it was obvious why. Nellie's Sports Bar had a line so long it threatened to curl around the block. The Velvet Lounge was standing room only. On our way to The Wonderland Ballroom, my friends and I stopped at Ben's Chili Bowl to use the bathroom. It was a good thing we weren't hungry because we wouldn't have gotten our chili dogs until sunrise. At Wonderland, the dance floor was full. Only when management turned off the music and flashed the lights did we go home. The club was full even then.

Yet the U.S. was not founded as a Judeo-Christian nation. Sure, some of our Founding Fathers were professed Christians. Patrick Henry, for example, was baptized an Episcopal, grew up going to a Presbyterian Church, and was devout his whole life. But other Founding Fathers were not Christian. Take John Adams, a Unitarian, or Ben Franklin and Thomas Jefferson, who were Deists. The Declaration of Independence states "Nature's God." It doesn't say anything about that god being Christian.

While I agree that many members of the educated elite should be more respectful of religion, religion should not influence public policy. Think about it logistically. How can the government possibly make laws that adhere to all religious beliefs and practices at the same time? Is the U.S. to ban all pork because eating it violates Jewish and Muslim beliefs?

As the law stands, churches are not required to perform same-sex wedding ceremonies. Churches still have the right to deny a religious ceremony to gay couples. To not have that right would be an infraction on religious liberty. Look at the Hobby Lobby legislation. An employer can deny contraceptive coverage to his employees for religious reasons. As of June 26, all that has been legalized is same-sex civil marriage. Nobody is forcing churches to marry gay couples.

With that in mind, many Christian churches DO perform gay weddings or similar blessing ceremonies. They interpret marriage as a lifelong covenant that doesn't have to hinge on procreation. As a gay couple, you can wed in the Episcopal, Presbyterian, Disciples of Christ, and Quaker churches, to name a few.

There are many versions of Christianity. My favorite version is that of hippie Jesus: God is love, pure and simple. I hope that love will continue to win.