A giant squid, whose oversized eyes and gargantuan blob of a body make it look more mythical than real beast, washed ashore Tuesday (Oct. 1) at La Arena beach in the Spanish community of Cantabria.

The beast measures some 30 feet (9 meters) in length and weighs a whopping 400 pounds (180 kilograms); and according to news reports, it is a specimen of Architeuthis dux, the largest invertebrate (animals without backbones) on Earth.

The giant squid is currently at the Maritime Museum of Cantabria, according to El Diario Montanes.

Tsunemi Kubodera, a zoologist at Japan's National Science Museum in Tokyo, and his colleagues, captured the first live footage of an Architeuthis giant squid in its natural habitat in 2012. The video revealed the elusive creature off the Ogasawara Islands, about 620 miles (1,000 kilometers) south of Tokyo at a depth of around 2,066 feet (630 m); the three-man crew aboard a submersible followed the giant squid down to 2,950 feet (900 m). [See Amazing Photos of Giant Squid] 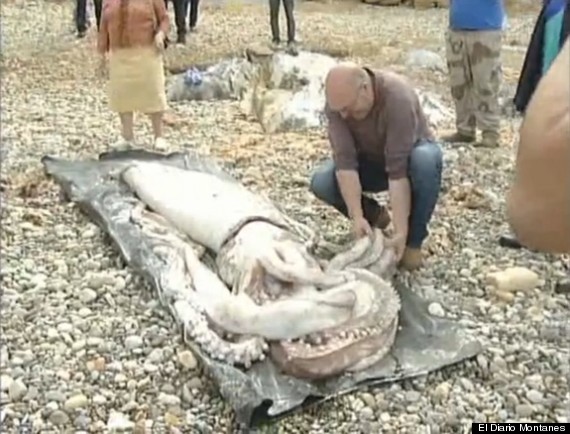 This giant squid called Architeuthis dux and measuring 30 feet long washed ashore in the Spanish community of Cantabria on Oct. 1, 2013.

"It was shining and so beautiful," team leader Tsunemi Kubodera, a zoologist at Japan's National Museum of Nature and Science, told AFP at the time. "I was so thrilled when I saw it first hand, but I was confident we would because we rigorously researched the areas we might find it, based on past data."

In addition to boasting record-large size, the giant squid also sport the animal kingdom's largest eyes, which can be as big as a human head, according to the University of Michigan's Museum of Zoology. These enormous peepers likely allow the squid to see in the deep-sea where minimal light is available. Though little is known about where these squid live, scientists say the giants likely reside in cooler waters, as research has shown their blood doesn't carry oxygen well at high temperatures. 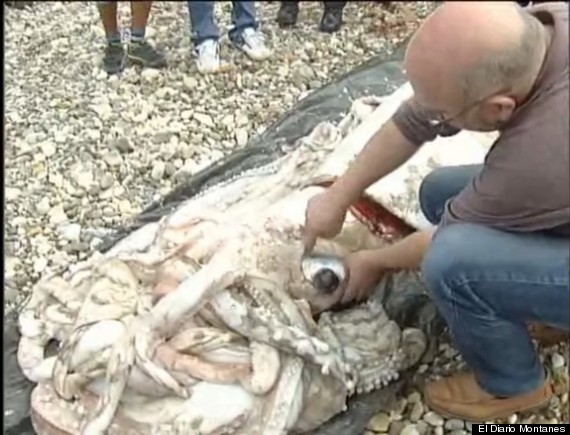 Like other giant squid, the one that washed ashore in Cantabria on Oct. 1, 2013, sported enormous eyes.

Like other cephalopods, a group that includes squid, octopuses, cuttlefish and their relatives, Architeuthis is thought to have an extensive nervous system and complex brain.

Steeped in mystery and legend, the deep-sea giant is said possibly to have inspired the Norse legend of the sea monster the Kraken and even Greek mythology's Scylla, a sea monster said to live in a narrow channel of water opposite its monster counterpart Charybdis.