As the holidays near, an endless medley of Christmas music bombards us from all corners of our lives. The sounds of jingling bells fill every shopping mall. Bars and restaurants blast music with heavy beats, telling us to eat, drink and be merry.

Our susceptibility to pulsating beats is a sure sign that we live in a culture of repetition. Mass media deploys various strategies through repetitive advertisement to engineer public's desire to possess goods. Robert Fink, in Repeating Ourselves: American Minimal Music as Cultural Practice, draws a parallel between the sonic properties of minimalism and the repetitive "pulse" of advertisement in our media-saturated culture. He argues that the culture of advertising "harnesses repetition to create inauthentic desire" and correlates this model of advertising with the rise of minimalist music from the 1970s. While Fink equates minimalist aesthetics with blankness and loss of affect in postwar America, Philip Glass, a prominent opera and film composer, transformed the ascetic art of minimalism into a language that has had a pervasive impact on popular music culture. So how did Glass shatter the ceiling of the classical music industry that had kept high art from merging with the "low" art of mass culture?

Back in 1985, Glass's music was experimental and iconoclastic. Thirty minutes into a concert of the Philip Glass Ensemble, many headed for the exit. I myself couldn't take the relentlessly repetitive music amplified at ear-shattering volume. His brand of musical minimalism represented the aggressive and edgy "downtown" New York music scene. He rejected the uptown classical music institutions of concert halls and opera houses. Nearly three decades later, however, many consider Glass to be the most influential American composer alive. He has composed symphonies, concertos, operas and film scores. He was nominated for Academy Awards for his soundtracks for Kundun (1997), The Hours (2002) and Notes on a Scandal (2006), and won the Golden Globe Award for The Truman Show (1999) and the Cannes Film Festival Award for Mishima (1985).

Minimalism originated in the visual arts in San Francisco in the '60s as a reaction against the subjective elements of Abstract Expressionism, whereby objects are stripped down to their elemental, geometric form and presented impersonally -- as in the paintings of Frank Stella and Sol LeWitt, for example. My favorite is the Optic Art (OpArt) style, in which the painting appears to move or pulsate. 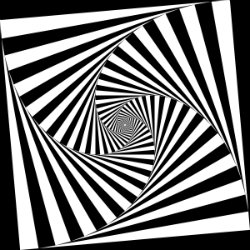 American minimalist composers likewise introduced new approaches to organizing rhythm by melding Western and non-Western musical traditions. Take, for instance, Steve Reich, who transcribed Ghanaian drumming patterns and developed his own rigorous technique of phasing in Drumming. Still, the aesthetic value of minimalist music adhered to a rigid musical principle. For an average listener, it was the kind of music that one marveled at for its sheer virtuosity and novelty, but as a highly ascetic art form, it resisted assimilation into mainstream culture.

Glass emerged from this movement with his own style of minimalism and began a quiet revolution of his own. An eclectic composer who received traditional training in composition at the Juilliard School, he went off to Paris to study with Nadia Boulanger between 1964-66. Upon his return, he took up Hindustani classical music with Ravi Shankar and Alla Rakha. His signature style of cyclically repeating triadic patterns with additive and subtractive rhythmic processes emerged out of his contact with Hindustani classical music. After his conversion to Buddhism, he began using his music to transform society by non-violent means. And the power of this pacifist idea is manifested in the operatic trilogy Einstein on the Beach (1975), Satyagraha (1979) and Akhnaten (1983). Film soundtracks for the Quatsi trilogy (Koyaanisqatsi, Powaqqatsi, Naqoyqatsi) also present a poignant social critique of modernity. More recently, he has collaborated with pop icons David Bowie, Brian Eno and Aphex Twin. In a recent New York Times article, British hip-hop singer Dev Hines credits Philip Glass's music as a major influence growing up in London.

How is it, then, that Glass's music moves listeners beyond the mindless pulse and into a state of mindfulness? In part, Glass's music is hypnotic: the repetition of triads creates a moving tapestry of sounds that puts listeners into an altered psychological state. A colleague who specializes in Tibetan culture equates Glass's music to meditation for this reason. His music can also induce a synesthetic effect in the listener, which refers to an involuntary act of mixing up senses, like seeing colors when hearing chords. Not too long ago, in a sold-out concert at Emory University's Schwartz Center for Performing Arts, my architect friend described the spatial quality of Glass's music in terms of "seeing" moving landscape. The synesthetic effect is not unlike the optical illusion generated by the aforementioned OpArt.

Glass's music also grounds us in the moment. Musicologist Susan McClary reminds us that minimalist music has no past tense -- the present seems to unfold forever. In the context of film, Glass capitalizes on this sonic quality by interweaving different temporalities and human perspectives through the tapestry of triadic music. Listen, for instance, to the opening scene from Koyaanisqatsi (Hopi Indian for "life out of balance"), which examines social alienation in modern life; Glass's chaconne in D minor accompanies Godfrey Reggio's stunning cinematography of the ancient civilization of Hopi Indian. The Hours interweaves the lives of three female protagonists from different eras in American and British history. The fragmented "hours" leading to Virginia Wolf's suicide are made vivid through the gradually accelerating pace in the cycle of triads. In Kundun, the young Dalai Lama sees his own life passing by as he prepares to leave for India to flee the Chinese occupation of Tibet. When the Chinese army slaughters Tibetan monks and people, an aerial view of the slaughtered monks segues to a scene in which Kundun destroys the beautiful sand mandala as a ritual exercise in impermanence. Glass's fast, kaleidoscopic music comments on the transience of human life as viewed through the tiny grains of sand that fly through the air. By adapting their popular soundtracks into symphonic suites for band and orchestra, other film composers such as John Williams and Howard Shore have successfully crossed over from popular to classical music culture. But Glass is unique in having transformed hardcore minimalist music into film soundtracks that provide penetrating social commentary on the human condition.

In this climate that promotes mindless consumption of food, goods and entertainment, let's not forget that music can be used to cultivate reflection and social awareness. While Glass's minimalist music started out by appealing only to a niche market, it has had a spectacular impact on popular culture by reshaping the aesthetic experience of millions of listeners beyond the concert hall. It offers a poignant case study for how art music, coming out of the experimental tradition, can impart a broader message to the public about the need to reflect on the incessant cycle of production and consumption that eats away at our humanity. At our humanity. At our humanity.