There's nothing quite like a thin-crust slice of pizza. The crust, both soft and crisp, isn't too thick, and lets the sauce and cheese take center stage. Although it's thin, the crust is crucial, and once you've had perfect crust like the kind you'll find at New York City's Motorino or Brooklyn's Roberta's, your pizza standards will change forever. Our love for thin-crust pizza pretty much eclipses any other sort of pizza. (Sorry, deep dish. When we want a casserole, we'll make a f*cking casserole.) Still, there remains one exception to our singular focus on thin-crust pizza, and that deviation from pure thin-crust devotion belongs to one important pizza: the grandma pie.

Grandma pie is square or rectangular pizza that has been cooked in an olive oil-coated pan. It's covered in a thin layer of mozzarella cheese, and in uncooked canned or fresh tomatoes, and when it comes out of the oven, the thick crust is a little crispy. Oftentimes, the cheese goes directly on the dough, and the sauce goes on top, but not always. For those of you who think grandma pie is the same as Sicilian pizza, allow us to clear things up for you. Yes, Sicilian pizza is also cooked in a square, olive oil-coated pan, but Bon Appetit explains the critical difference. The dough in Sicilian pizza is left to rise a little between the time that it's stretched on the pan and put in the oven. This waiting time makes for a softer, fluffier final product. Grandma pie, on the other hand, is tossed in the oven quickly or immediately after it's been stretched onto the pan, which gives it a slightly denser and crispier crust.

“Think about it this way,” Scott Wiener, who runs Scott's Pizza Tours, told Bon Appetit. “These are the actual pies that Italian-American grandmothers made. Sure, they’ll simmer meat sauce all day, but when it comes to getting a pan pizza in the oven for the kids, they’re not sitting around waiting for dough to rise.” Actual pies made by actual Italian grandmothers? Well, if there's one thing we know for certain, it's that no one can compete with an Italian grandmother in the kitchen. 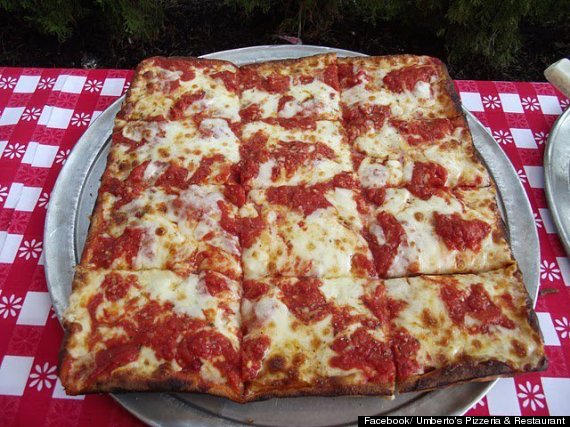 While it's becoming increasingly popular, grandma pie is still relatively unknown. New Yorkers have been privy to the pizza for decades, but in the midst of the Neapolitan pizza's soaring popularity, the grandma pie has retained something of a cult following. That's all well and fine by us, because it means more grandma pie for our endless appetites, but it pains us slightly to think that some people aren't familiar with this epic pizza form.

Like many great foods -- especially of the Italian-American variety -- the origins of grandma pie are somewhat unknown. According to Forbes, in Italy people (namely grandmas, of course) make fast pizzas in their ovens from quickly stretched and pressed dough, fresh tomatoes and a little bit of cheese. Michele Scicolone, co-author of "Pizza: Any Way You Slice It," told Serious Eats that "grandma pie sound[s] a lot like 'pizza alla casalinga' (housewife-style pizza), the kind of pizzas you'd get in Italy if you were invited to someone’s home." Forbes says that some time around the 1970s, Italian Americans who had emigrated to Long Island started getting nostalgic for the pizza they grew up eating in the old country, and started imitating this quick and casual pizza form. When this old-school pizza style got dubbed "grandma pie" and started making waves in New York City is also up for debate, but it appears we can thank Long Island for the grandma pie as we know it today.

A handful of restaurants in New York City are serving some seriously good grandma pies these days. Newcomer GG's in the East Village makes a pepperoni-topped pizza that's nothing short of an instant NYC classic. Under-the-radar Il Porto in Brooklyn also makes a mean grandma pie. If you don't live in New York and can't sample some of the great grandma pies the city offers, try making your own! After all, grandma pie was invented to be eaten at home.