Over the past few years, British television has produced a bumper crop of terrific shows, many of which have found large audiences around the world: "Downtown Abbey," "Sherlock," "Broadchurch," "Call The Midwife," "Happy Valley" and the "Doctor Who" revival. American TV fans might assume that one of them -- maybe "Downton" -- is the most popular show in the U.K. at the moment. But they'd be wrong.

In fact, when it comes to ratings, all these dramas have been bested by a show called "The Great British Bake Off." It's exactly what the title implies: an amateur baking competition. A whopping 12.3 million Brits tuned in to the finale of the show's fifth season on Oct. 7. That's 1 in every 5 people in the U.K, and fully half of the country's TV viewership for the night. It was the country's most-watched non-sports broadcast since the Season 6 finale of "Britain's Got Talent" aired in May 2012.

Contestants Chetna and Luis put the finishing touches on a sweet bread for a technical challenge.

"The Great British Bake Off" has become a shockingly potent cultural phenomenon. It's also a titanic success compared to most other cooking competition shows from around the world. Bravo's "Top Chef," a U.S. cultural juggernaut, tends to draw between 1 million and 2.5 million U.S. viewers a week -- in a country five times as populous as the U.K. The most popular food show on American TV in recent years was "Hell's Kitchen" on Fox -- and that never had over 10 million viewers. And those shows feature cooking, which is, at least according to conventional wisdom, far more telegenic than baking, where much of the action takes place behind closed oven doors.

"The Great British Bake Off" doesn't feature any of the glittery hallmarks of America's most popular reality competitions. It lacks the exotic backdrops of a show like "Survivor" -- 90 percent of the show takes place in a single tent filled with cooking stations. Its contestants aren't, for the most part, young and attractive; many are as plump, rosy-cheeked and dowdy as you'd expect a British baking devotee to be. They live at home throughout the show, rather than together in domestic discord like the stars of "Big Brother" or "The Real World," coming in to film just once a week. Every episode unfolds exactly the same way, with three baking challenges and an elimination, unlike the ever-protean "Amazing Race."

And there's not even any prize money.

All that explains why it took Love Productions, the company behind "The Great British Bake Off," five years to sell networks on the idea. It also makes the show's blockbuster popularity now, five seasons in, completely confounding. Why do so many people love it?

I was tempted to chalk it up to the quirky middlebrow taste of British viewers and leave it at that. (After all, "Mamma Mia" was the highest-grossing film in U.K. history when it was released in 2008.) But then I watched the show.

After a half an hour, I found myself, against all odds, riveted. Many of the features of the show that seemed like barriers to popularity were actually its greatest strengths. The contestants' lack of glamour made them deeply sympathetic. Staging all the action inside the tent focuses your attention on the human drama and culinary wizardry going on. And the part of baking that seemed like it would be the most boring -- waiting for the pastries to cook in the oven, or for dough to rise -- actually ended up building suspense, like the scenes in horror movies where the innocent, scared victim walks silently down darkened corridors, waiting for the villain to strike.

Much of the show's suspense comes from moments like this one, in which a contestant can do nothing but wait for her pastry to bake.

I'm not a pastry fanatic, but even I could appreciate the splendor of many of the desserts on the show. And some elements of the show feel novel, especially the "technical challenge," in which every baker completes the exact same recipe using the same ingredients, and judging is based purely on execution. The whole season only lasts 10 episodes, so it never drags like "American Idol."

But the real secret to the show's allure lies in the contestants themselves. They display none of the vanity or fame-hunger of most American reality stars. No one starts needless drama to get more airtime. (When one competitor gets upset about a baked Alaska gone awry, throws it in the garbage and storms off the set in fury, it's clearly a spontaneous outburst rather than a bid for attention. He regrets it afterwards, but is nonetheless quickly eliminated.) Perhaps because there's no money on the line, contestants never sabotage or badmouth one other to get ahead. 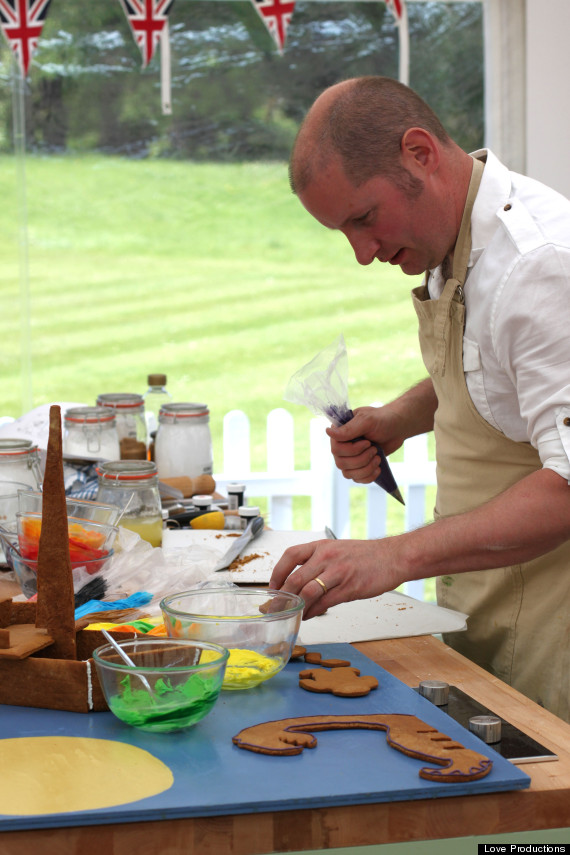 Richard, one of the most successful contestants in Season 5, is a construction worker.

This makes them sound boring. They're not. They're just nice, normal people -- construction engineers, furniture restorers, retired Merchant Navy radio operators -- who happen to be excellent bakers. And they're so earnest and raw in their desire to prove themselves that you can't help but root for them. Call it the Susan Boyle effect.

Richard McKerrow, the chief executive of Love Productions, said that's exactly what his team intends when they cast the show.

"Bakers are really good people. The very act of what they do is to make something for lots of other people," McKerrow said. "That makes them really refreshing. You hadn't seen these people on TV before. They're not cast for loud, brash personalities; they're regular people."

In the end, "The Great British Bake Off" is propelled by the same dramatic engine that makes sentimental nighttime soaps like "Friday Night Lights" and "The Fosters" so effective: hope that good people will achieve what they're striving to achieve. When they cheer, we cheer; when they cry, we cry. When the show's improbably named judge, Mary Berry -- an eminently Tumblr-able cross between Florence Fabricant and the Dowager Countess of Grantham -- criticizes someone's jam for being too runny or their entremets for looking too bulbous, we feel how much it must sting.

Mary Berry, one of the show's judges, can be brutally harsh on the contestants.

All that's to say that, although I watched the Season 5 finale of "The Great British Bake Off" alone in my apartment 5,500 miles from London -- and though I knew that the outcome didn't include any material prize -- when I saw grandmother Nancy Birtwhistle win the competition and tear up with pride and joy, I found myself bawling my eyes out, just as 12.3 million Brits must have a month earlier.

On this side of the pond, though, I'm in less robust company. "The Great British Bake Off" isn't currently distributed through any legal American channel -- not even iTunes or BBC America. (Love Productions sent me digital screeners for this article.) Last year, CBS tried adapting the format for American audiences, but they ended up canceling it after one relatively low-rated season.

McKerrow, though, hopes that the tremendous success of the most recent season might convince another American channel to try its hand at the show. He noted that the English version wasn't an overnight success; its audience grew slowly over several seasons.

"We would love to bring it back. I think it could do really, really well," he said. "I don't see any reason why it couldn't do as well in America as it has in Europe." 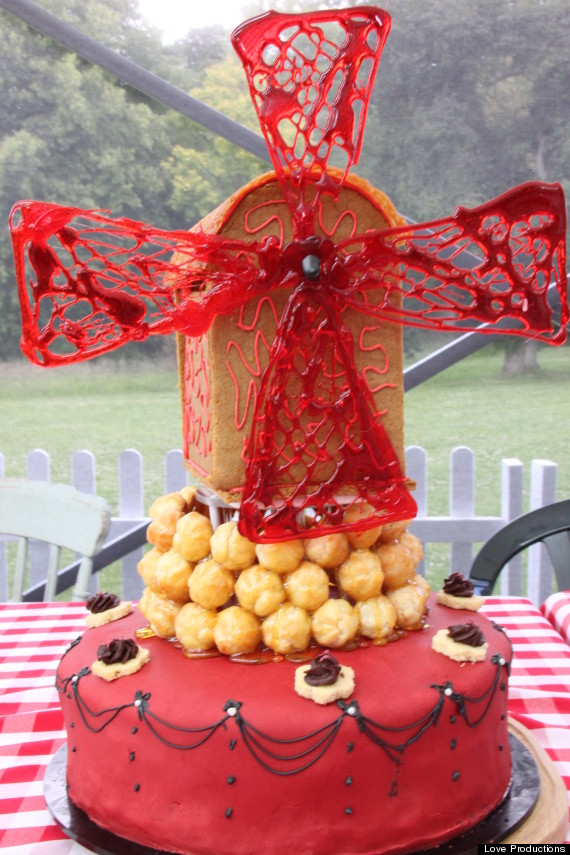 Nancy Birtwhistle, who won the competition in Season 5, made this cake in the finale episode of the show.