ATHENS/BERLIN, June 15 (Reuters) - Greece and its creditors hardened their stances on Monday after the collapse of talks aimed at preventing a default and possible euro exit, prompting Germany's EU commissioner to say the time had come to prepare for a "state of emergency."

Prime Minister Alexis Tsipras ignored pleas from European leaders to act fast. Instead he blamed creditors for Sunday's breakdown of the cash-for-reform talks, the biggest setback in long-running negotiations to unlock aid. He said his government had a responsibility to defend Greece's dignity and would resist demands for further pension cuts.

"It is not a matter of ideological stubbornness. It has to do with democracy," said the 40-year-old leftist, who was elected on a pledge to end austerity.

Athens now has just two weeks to find a way out of the impasse before it faces a 1.6 billion euro repayment due to the International Monetary Fund, potentially leaving it out of cash, unable to borrow and dangling on the edge of the currency area.

Germany and other creditor nations demanded that Athens come to its senses and offer new proposals.

"It won't work that Greece sets the terms and says 'everyone has to dance to our tune'. Greece needs to get back to reality," Volker Kauder, parliamentary floor leader of Chancellor Angela Merkel's conservatives, told ARD television.

Belgian Finance Minister Johan Van Overtveldt said the euro zone's credibility would be damaged and radical forces in other countries emboldened if past accords with Greece were changed.

The European Commission said it would only resume mediation efforts if Greece put forward new proposals, while the Greek government spokesman said Athens was sticking to its rejection of wage and pension cuts and higher taxes on basic goods.

"We have largely exhausted our limits," spokesman Gabriel Sakellaridis said. Tsipras' office said Greece was ready to restart talks at any time and was waiting for a signal from lenders which could loosen the deadlock.

A Greek government official denied a German newspaper report that said there were plans for Greece to impose capital controls this weekend if the talks fail. A German government spokesman could not confirm the report.

Despite the deepening crisis, Tsipras is going ahead with a planned visit to Russia from Thursday, the day euro zone finance ministers hold a crucial meeting to review the standoff with Greece. He is due to stay till Saturday, attend an economic forum in Saint Petersburg and meet President Vladimir Putin.

EU officials said that without improved Greek proposals by Thursday, the Eurogroup session would be very tough and was likely to present Greece with an ultimatum.

"No more new proposals; take it or leave it time is upon us, I think. Or very close." one euro zone official said.

While there was little outward sign of panic in Athens as Greeks held out hope for a last-minute solution - a familiar theme in five years of crisis - the latest impasse triggered a selloff in European and Asian shares and weighed on the euro.

Greek banks suffered deposit outflows of about 400 million euros ($449 million) on Monday as the pace of daily withdrawals picked up from last week, bankers said.

European Central Bank President Mario Draghi said the ECB would keep approving emergency lending to Greek banks as long as they remained solvent but would monitor closely whether they had sufficient collateral.

Draghi stressed in testimony to the European Parliament it was up to elected politicians, not to central bankers, to decide on Greece's fate and the ECB could not allow its liquidity to be used illegally to finance the Greek government.

"While all actors will now need to go the extra mile, the ball lies squarely in the camp of the Greek government to take the necessary steps," Draghi said.

A Reuters poll of euro money market traders put the chances of Greece leaving the euro zone this year at nearly one-in-three, higher than predicted just a month ago.

"We should work out an emergency plan because Greece would fall into a state of emergency," German EU commissioner Guenther Oettinger said. "Energy supplies, pay for police officials, medical supplies, and pharmaceutical products and much more" needed to be ensured.

Tsipras will brief Syriza lawmakers on the negotiations at 1 p.m. (1000 GMT) on Tuesday after meeting Stavros Theodorakis, leader of the center-left To Potami party and the newly appointed head of Pasok, Fofi Gennimata.

Gennimata, an ex-minister and daughter of a former senior official in the Socialist party which once dominated Greek politics, was elected as president by the party on Sunday.

Tsipras blamed "political expediency" on the part of lenders for the impasse and their insistence on new cuts in pensions "after five years of looting under the bailouts."

Exasperated by what it sees as Greek distortion of the creditors' proposals, the European Commission made public for the first time comprehensive details of the plan, denying that the lenders were demanding specific pension or wage cuts.

Spokeswoman Annika Breidthardt said Greece and the three institutions - the IMF, Commission and ECB - had agreed on budget surplus targets before debt service for the coming years, but not on what Greece needed to do to achieve those goals.

The lenders called for annual savings of 1 percentage point of gross domestic product on pension spending, equivalent to 2 billion euros a year, while Athens only offered 71 million, or 0.04 percent, she said.

"The targets have already been lowered .. It's not a one-way street," Breidthardt said.

Greece says years of austerity have only made its situation worse by shrinking the economy, making it harder to pay off debt. Tsipras insists that debt relief must be part of any deal.

The creditors argue Greece must reform its pensions system to put state finances on a sustainable footing. Greek workers retire younger on average than in other European countries and collect pensions close to German levels that require unaffordable government subsidies, they contend.

"Why insist on pensions? Pensions and wages account for about 75 percent of primary spending; the other 25 percent have already been cut to the bone," IMF chief economist Olivier Blanchard wrote in a blog post.

The prospect of elections or a referendum to give Tsipras a face-saving way out of the crisis made a comeback in the Greek debate as the premier faced calls from the opposition to secure a deal to avert an economic collapse.

Although some economists still believe that, as in past crises, a last-minute fix will be found to avoid default, European politicians sound more determined than before to resist compromising with demands they consider unreasonable.

Greek Finance Minister Yanis Varoufakis retorted in an interview with Germany's Bild newspaper that a deal could be reached quickly if Merkel took part in the talks.

"I rule out a 'Grexit' as a sensible solution," Varoufakis said. "But no one can rule out everything. I can't even rule out a comet hitting Earth." 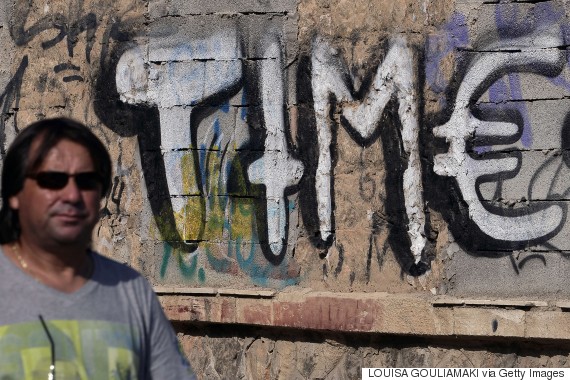