Tropical Storm Agatha made landfall near the border of Guatemala and Mexico on Saturday with wind speeds of up to 45 mph (75 kph), then weakened into a tropical depression before dissipating over the mountains of western Guatemala.

Although no longer even a tropical depression, Agatha still posed trouble for the region: Remnants of the storm were expected to deliver 10 to 20 inches (25 to 50 centimeters) of rain over southeastern Mexico, Guatemala and parts of El Salvador, creating the possibility of "life-threatening flash floods and mudslides," the U.S. National Hurricane Center in Miami said in an advisory Sunday.

Guatemalan President Alvaro Colom said Saturday night that the rivers in the country's south were flooding or close to it.

As of Saturday night, 4,300 people were in shelters and authorities said the number could rise as figures come in from around the country.

Four children were killed by another mudslide in the town of Santa Catarina Pinula, about six miles (10 kilometers) outside the capital. And in the department of Quetzaltenango, 125 miles (200 kilometers) west of Guatemala City, a boulder loosened by rains crushed a house, killing two children and two adults, de Leon said.

Calls to local radio stations told of many more landslides and possible deaths, but those reports could not be immediately confirmed.

A three-story building in northern Guatemala City fell into a sinkhole but there were no reports of victims. 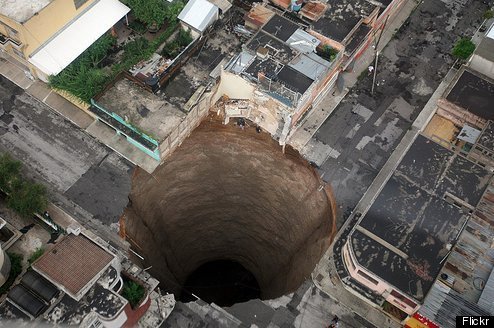 Cesar George of Guatemala's meteorological institute said the community of Champerico had received 11.8 inches (30 centimeters) of rain in 30 hours.

"It rained in one day what it usually gets in a month," George said.

Colom said authorities have not been able to reach Champerico by "air, land or sea."

In El Salvador, President Mauricio Funes declared a "red alert," the highest level of emergency, after rains delivered by Agatha triggered at least 140 landslides throughout the country and killed two adults and a 10-year-old child. The exact cause of their deaths was unclear.

Civil defense officials said the Acelhuate River that passes through the capital, San Salvador, had risen to dangerous levels and was threatening to overflow into city streets.

Agatha formed as a tropical storm early Saturday in the East Pacific.

Before the rains, Guatemala already was contending with heavy eruptions from its Pacaya volcano that blanketed the capital in ash and destroyed 800 homes.

The volcano, which is just south of the capital, started spewing lava and rocks Thursday afternoon, forcing the closure of Guatemala City's international airport. A TV reporter was killed by a shower of burning rocks.