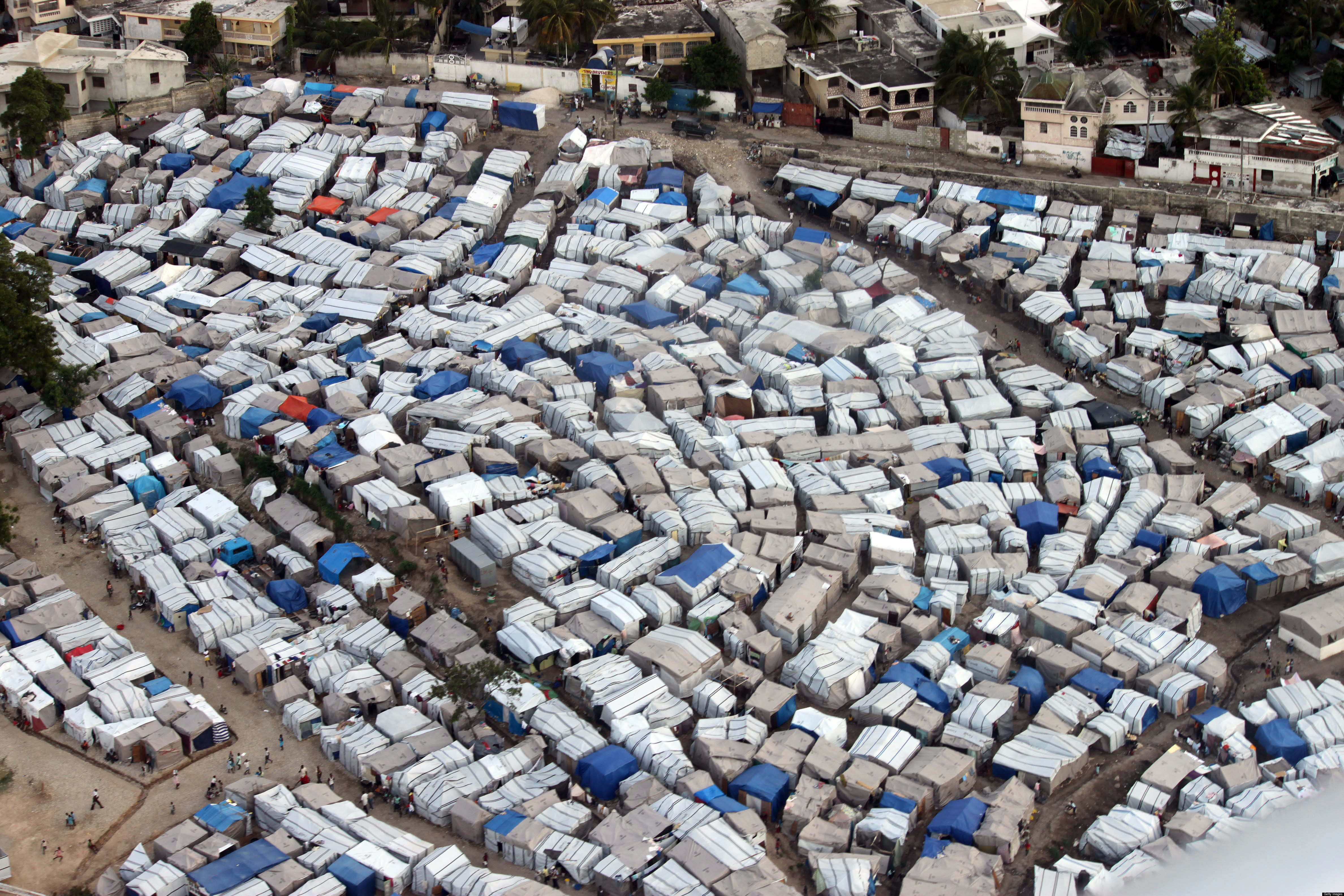 The devastation in Port au Prince on January 12th was enacted by nature and exacerbated by man. The chain of events that enabled this is a lesson in systems thinking, and proof that horrific outcomes are the only result of a system that is perfectly designed to achieve them. Haitians were crushed and killed because construction was faulty, because building codes and enforcement were inadequate, because their private sector evades taxes, because their economy is on the wrong side of globalization, because the Americans fixed it so that rice farmers in Arkansas were protected. Despite all this, Haitians don't deserve our sympathy.

Unfortunately, there are other outcomes of the earthquake that will be exacerbated by the donors' response. I was invited to convene and facilitate the first panel discussion at the Sustainable Haiti Conference in Miami to shape the discussion around the impending aid flows. Stanford economist, Paul Romer, the innovator behind New Growth theory, likened the massive aid commitments (USD 11 billion in the short-term, and some USD 34 billion over ten years) to the notorious "waterfall method" of planning, where requirements cascade toward design, implementation, verification, and maintenance phases. The problem is that in the fast moving, ambiguous environment of nation building, needs and goals change faster than the plans.

Dambisa Moyo, the Oxford-trained Zambian economist who has staked her career on African self-determination, explained the difference between humanitarian aid, and aid that fosters growth. She suggested that no country was ever lifted out of poverty by aid. She cited Paul Kagame's Rwanda as an example of a country that has cut its aid in half as a percentage of its government budget, and is growing wages at up to 30% each year by focusing on entrepreneurship, foreign investment, broad political participation, and regulatory reform.

The former Minister of Finance of Afghanistan, Ashraf Ghani, who has been short-listed to run both the World Bank and the United Nations, made a number of trenchant critiques of the international aid system. He urged Haitians to "take control," and warned them that the large amounts of aid being discussed could "sever the sovereign relationship between the government and the people." Haitian private and public sector leaders glanced at one another and murmured, "Bravo."

In Washington, D.C., I testified on Haiti with several others to the Congressional sub-committee in charge of international financial institutions. I spoke to congresspersons Meeks, Miller, Waters, and Watts. They were informed, action-oriented, and had a reputation for bi-partisanship. Meeks, who represents a large community of Diaspora-Haitians in his district, sat high up in the chairman's seat as if it were a gunner's turret on a Humvee Avenger, but chaired the meeting more like a world-class statesman than a politician.

Waters had just arrived back from Haiti and spoke passionately about the need to reform USAID procurement procedures on the ground. We discussed the need to create a shared vision between donor and recipient, disbursement of aid through national and indigenous institutions, and investment in people that increases competence beyond applying for more aid.

I observed that USAID vendors represent an oligopoly; that the U.S. government procurement processes destroy innovation; that contracts should be untied to American suppliers and focused on local and regional suppliers; and that vendors should be punished for poor performance and rewarded for superior performance. This avoids the exaggerated claims, the "over-responsibility" inside the proposal, the blaming and excuses, and the "under-responsibility" over pitiable outcomes. Consistently poor performers should be forced by competitive global market forces to leave the industry.

Nancy Birdsall, the founder of the Center for Global Development, and one of America's most practical development economists, asked if the sub-committee might consider suspending the rules around the procurement of services for Haiti, just to get things done, just to see if a new approach might work.

Platitudes for the Latitudes

I wanted to learn more, so I attended the United Nations' Haiti Donor Conference in New York City. The United Nations building--with its fifties décor, broken floor tiles, leaks, and transient residents--sparked an image of the world's largest guest bathroom in need of a renovation. The leaders of the United Nations, the Multi-lateral banks, the European Union, Bill and Hillary Clinton, and President Preval of Haiti, all spoke. They were unanimous on the themes. We need to invest in shelter, education, rural development, women's rights, and debt reduction.

There were also the north-to-south platitudes: vague, politically correct truisms with no teeth to bite. "We need Haiti to succeed." "Build the engines for progress and prosperity." "We cannot accept business as usual." "We have great confidence in the resilience of the Haitian people." "It is tempting to fall back on old habits." And, the requisite, "It is essential that Haiti take ownership in the rebuilding effort."

There were a few exceptions. World Bank president, Bob Zoellick, called for all the donors to provide budget support for the Haitian government. IDB head Luis Alberto Moreno, perhaps the greatest reformer in the room, presented a vision for "a 21st century Haiti" that focused on specialized infrastructure, services, and governance. He mentioned the IDB's more nimble arm, the Multilateral Investment Fund's recent state-of-the-art investment in Fonkoze, an alternative bank for the poor.

The President of the National Chamber of Commerce and Industry of Haiti, Reginald Boulos, a third generation Lebanese-Haitian, medical doctor and successful entrepreneur, represented the Haitian private sector. He said, "For the first time in the history of Haiti, a unified and inclusive private sector, ... has decided to break with the past and formulate a shared vision and roadmap for the sustainable development of Haiti." The room, filled with hundreds of donors and diplomats, fell quiet.

Boulos proposed that donors allocate at least 50% of all funds and guarantees to formal Small and Medium Enterprises (SME) and micro-enterprise financing; encourage broad ownership of larger companies; and implement SME set-asides, especially in the housing and construction sectors. He recommended supporting new entrepreneurs with seed capital and management assistance to unleash entrepreneurship through the creation of capital investment funds, a Diaspora investment fund, and business development centers.

Everyone in these Haiti meetings in Miami, Washington, and New York has a heart for the poor, but do they also have a mind for the poor? My colleague, faith-based author and entrepreneur Andreas Widmer, draws a distinction between the impact of sympathy and empathy in the development process. He calls it the "trap of sympathy." It is where overzealous donors bring their own experiences to bear and take decisions away from the recipients. This demeans the poor, creates a paternalistic relationship, and destroys that most precious of human qualities, self-determination.

Andreas says, "We may interfere, temporarily, in matters of survival; but when it comes to sustained solutions, we must respect the dignity of the person and support them as they find their own solutions." Empathy means that we have a mind for the poor; it means we recognize that we would probably behave as they do in the same situation.

Haiti is crippled by natural disasters, by models of government-private sector relations and wealth creation that are archaic, and by a culture that is event-driven and fatalistic. Donor actions will either support or subvert these qualities. Haiti's challenges will never be surmounted by massive infusions of aid, by platitudes, over-responsibility, and speechifying up and down the east coast of the United States. Haitians don't deserve our sympathy, they deserve better.

Haitians themselves are figuring this out; we need to be willing to be guided by them. Dr. Boulos emphasized that there were a number of principles behind his recommendations, among them: accountability, equality, and "independence from international aid."

Boulos was one of the few Haitian speakers that day. Most attendees will remember that he represented the private sector; others will note that he provided a vision of authentic Haitian ownership in change. One observer, President Bill Clinton, who sat a few feet from Boulos, removed his reading glasses, turned toward the audience and said, "I just want to make sure everyone appreciates how specific Dr. Boulos has just been."

Michael Fairbanks advises leaders of government and the private sector on enterprise solutions to poverty and is the author of several books. He has been working with the leaders of Haiti since the earthquake. www.sevenfund.org