On the runway at San Francisco International Airport that day, the plane looked like another British Airways 777 rolling out on the tarmac for an international flight. The giant aircraft, however, was filled with a group of creative thinkers and accomplished business people taking part in what the airline called an "Ungrounded" flight. The destination was London and the G-8 summit, and as they reached cruising altitude, assigned teams set to work attempting to find sustainable solutions to global problems.

One of the passengers onboard was Austin entrepreneur William Hurley, the founder of Honest Dollar and Chaotic Moon Studios.

"This was amazing," he said. "Just amazing. We collaborated with the International Telecommunications Union (ITU) and the United Nations and came up with ideas for increasing the number of women in STEM (science, technology, engineering, and mathematics) and improving their access to digital resources and jobs. We've been energized about all of this ever since."

Hurley, who is known in the tech community as "Whurley," has just become a part of an international effort that will focus on empowering women by increasing their access to information and communications technologies (ICT). ITU and United Nations Women just launched a program called "Equals: The Global Partnership for Gender Equality in the Digital Age."

Data from UN Women indicates the Digital Divide isn't just about economic access to technology but is also constrained by gender. Globally, 250 million fewer women are online than men and the Internet user gap between the sexes has increased to 12 percent in 2016. In the developing world, the figure is even more daunting for women with a 31 percent difference.

"We need to make girls and young women understand that tech is not just for boys," said Doreen Bogdan, Chief of Strategic Planning at International Telecommunications Union in Geneva, Switzerland. "Tech has become a part of everyone's lives, but right now women are largely excluded. They're less likely to be online than men, less likely to choose technology-related studies, less likely to be working as a tech professional, and much less likely to be in a tech leadership role. We have to change that. We can change that." 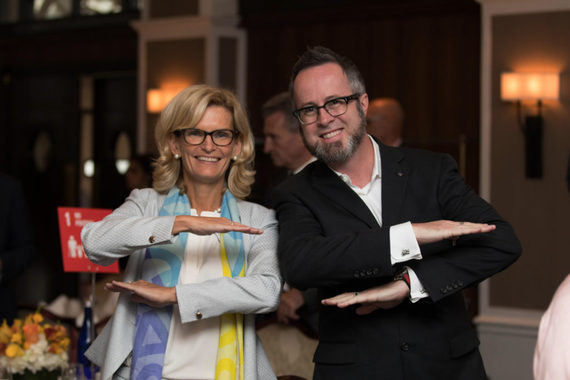 Doreen Bogdan of ITU and Whurley Make the "Equals" Sign

Bogdan's ITU organization launched International Girls in ICT Day in 2011 as part of the initial efforts to begin closing the gender digital divide. Celebrated every year on the fourth Thursday in April, 160 countries around the world have participated in the 7,200 events that reached 240,000 girls.

Increasing the number of women in technology is not just good for their gender; it also is expected to have a widespread impact on the global economy. Tech giant Intel estimates that an additional 600 million women and girls online has the potential to boost global GDP by as much as $18 billion dollars.

"The information society is incomplete without the inclusion, contribution and leadership of women and girls," said Phumzile Mlambo-Ngcuka, Executive Director, UN Women, in the Geneva announcement of the Equals program. "They must have access to ICTs, and we must foster their capabilities to use the technology. This is central to the realization of women's rights at all levels and can be a real driver of accelerated progress towards the achievement of Agenda 2030."

The agenda involves the UN Sustainable Development Goals and includes a campaign to bring equality to women through the Internet and associated technologies. The technology imbalances for women can, nonetheless, appear overwhelming. According to ITU, there are 1.7 billion women in low- and middle-income countries that still do not even own a mobile phone. Research also indicates there are fewer women in the ICT workforce at every level and in every country.

To end these shortcomings, the Equals campaign's three goals are to achieve equal access to digital technologies for girls and women, empower them with skills to become ICT creators, and promote females as ICT leaders and entrepreneurs.

"Historically, I have usually worked for women in my career," said Whurley. "Including places like Apple and IBM. I know a lot of women who are engineers so I have a bit of a different perspective. They are not unicorns. They are out there in technology and we'll have more of them if we just create the right environments and provide more opportunities. We have to make some adjustments. We are only going to be having more and more technology and we need more bright and creative women for even more innovation."

There is much to be accomplished. In 2016, women ran just three of the tech companies in the Fortune 500 -- IBM, Xerox, and Oracle. There were only 21 female CEOs out of all of the Fortune 500. Businesses, non-profits, institutions and individuals interested in working to close the digital divide for women are asked to email partners@equals.org to become a part of guiding, tracking, and scaling up successful initiatives for change.