Highland Park, Mich. has a streetlight problem of staggering proportions, but it's an issue that a small group of citizens believe they can remedy.

Faced with $58 million in municipal debt and a $60,000 monthly electric bill it could not pay last year, it decided to physically remove 1,000 of its 1,500 streetlights to help lower utility costs. The decision may have saved the city money, but it also left residents in the dark.

Tired of just accepting a permanent night-time blackout for much of the city, cafe owner A.J. O'Neil banded together with several Highland Park residents to find a solution. They believe the answer to the city's lighting woes lies with crowd-funded solar powered streetlights -- and they're making progress on their vision. The first of these lights was installed Tuesday at 150 Victor St. near the historic backdrop of the United States' first automotive assembly plant -- just in time for Thanksgiving.

The Huffington Post spoke with O'Neil about the technical, environmental and social dimensions of the project.

Huffington Post: Explain what's going on with the streetlight project.

A.J. O'Neil: This started as a vision several months ago. Highland Park had to make an agreement to retire a debt and they did that by having two-third or more of their municipal streetlights actually repossessed by the utility company and taken out so. I realized as I have been doing a lot of business and other things in Highland Park that it was just a just a crying shame -- the dark. It was absolutely awful to see and navigate around in the neighborhood. It's not good for neighborhood safety. It's not good for anybody. So we started a campaign called Soulardarity. It's a three-faceted word of soul, solar and solidarity. We're raising enough to get the first street light in and hopefully 199 after that all over Highland Park.

Tell us a little about the streetlights themselves?

The streetlight is actually state of the art. It's LED, 45 watt, maximum output of lighting. It just does a beautiful job of illuminating a very large path of landscape. It is made virtually entirely by Michigan-made products. What isn't made in Michigan is made here in the U.S.A. It stands 25 feet tall with a composite fiberglass pole and the batteries -- four 115 pound battery tanks -- sit high on top locked in an enclosed compartment. It protects them from the elements and is absolutely virtually theft-proof. The glass itself is rock-throwing vandal retardant. It's a fantastic light.

How long has this type of streetlight been around?

The patent is two years old. The company's been around for a long time. Craig Brumels is my technical assistant and owner of Solar Streetlights out of Holland, Michigan. We co-collaborated on this venture. And we look forward this being a great opportunity.

How much does one of these streetlights cost?

The total cost for a streetlight is going to be around $5,500, when you account for the streetlight, the shipping the installation and the excavation and the backfill. It could go even up from there, if we start getting into municipal permits and requirements. We need to address how the community wants to handle these streetlights, because we're going to get a zero utility bill. ... But they're going to need to be adopted and taken care of and [we'll need] a community fundraising campaign for battery replacement and maintenance and things that go along with running a municipal thing -- unless the municipality wants to grant the utility bill going through their taxpayer dollars. This is just the first step in the overall upkeep of this. There's about a ten-year life of the batteries, but you're talking about $1,100 to replace [it]. We don't want to see that thing go out in ten years.

Why do you think this is an important project for people to know about?
Very simply, it is not just green economy. It makes our town safer. It's not much more simpler than that. ... Highland Park can serve as a prototype for urban lighting needs, a model for the rest of the country. It's totally doable. If we can do it in Highland Park we can do it anywhere.

Who's involved with the project?

Soulardarity started out as very small unpretentious basement talk in the church basement -- Kyle Wohlfert, Jackson Koeppel, Stephanie Edlinger, Lawrence Ray and myself. We basically started this thing down there. (O'Neil operates his cafe in the basement of St. Benedicts church and shares the space with a number of other groups).

How are you funding the project?

We came up with it through an indiegogo program and some of it was privately donated through checks as well. I think its called crowdfunding. It's a relatively new way to make loans or money available for projects that are deemed worthwhile. We submitted a video and you can find that on indiegogo.com/soulardarity. We are almost two-thirds of the way to our goal of $6,250 but we did get the barebones minimum to at least get the streetlight installed. We still have to pay for the costs associated with running the campaign now, but we're confident we'll get it and then some. Any leftover money will go to the next one. We need 200 of them altogether.

That's what the city estimated they needed to fill their lighting needs.

That seems kind of ambitious. How do you think your going to be able to pay for all those streetlights?

From conversations just like this, for one. Highland Park is ground zero at the center of the manufacturing economy that led to the middle class -- that led to everything. I'm not the only one who doesn't want to see Highland Park without proper street lighting during the 100 year celebration of that first assembly line. I can share this story with as many people as I can -- who either made their fortunes or their families in Highland Park -- and hope that some of them will want to subscribe to it. I think it can be done.

Anything else people should know?

You can donate or get involved. Visit soulardarity.com If you'd like to donate. You can find a link on that page. 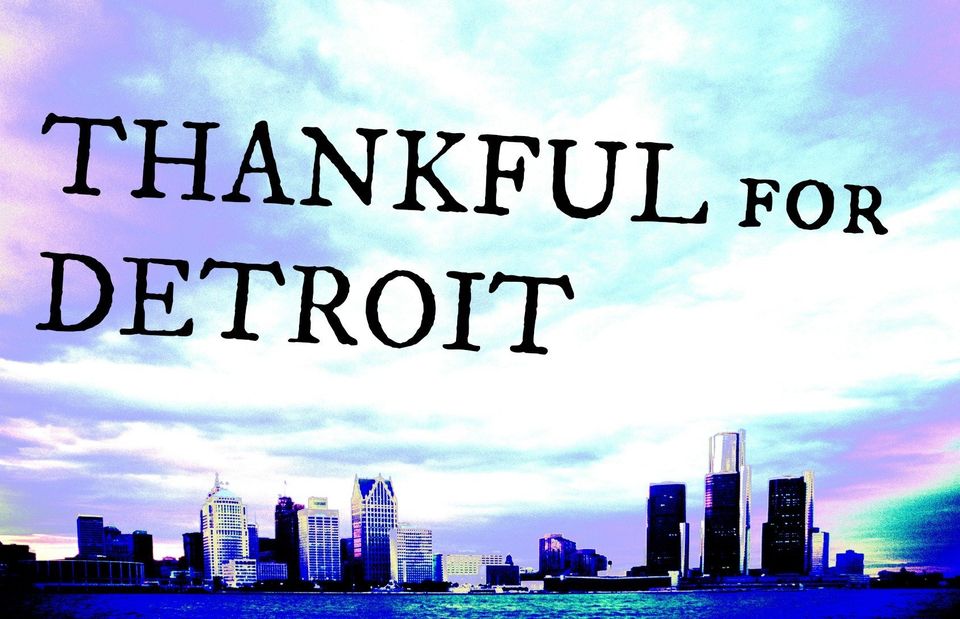 1 / 18
Thankful
Why the Motor City makes us grateful. Happy Thanksgiving from HuffPost Detroit!