One of the reasons I started my website, Marlothomas.com, is that I wanted a place for women (including me!) to come together and dream. Women should know that they don't have to hang on to an old dream that has stopped nurturing them -- that there is always time to start a new dream. In that spirit, I'm so excited to introduce a new series called It Ain't Over, profiling women who have pursued -- and fulfilled -- their dreams and passions, no matter what their age or circumstances. I find these stories endlessly inspiring. I hope you do too.

When Liz Glasgow thinks back to her childhood, the memories are in vivid colors. The only daughter of top U.S. fashion illustrator Hilda Glasgow and celebrated painter Bernard Glasgow, Liz describes her early years as every little girl's dream. Beautiful models in satins and silks sashayed in and out of their New York City apartment. And as they primped and prepared for Hilda to sketch their images, Liz dressed up in the crinoline that filled her mother's drawers and posed on the model stand until it was time for her to take her place at an easel right next to Mom's.

"My mother couldn't help but recognize my interest in art early on," Liz said with a smile. "One morning when I was about three, I got up early and went into her studio to see what she'd been working on and decided that I could make it better -- so I just kind of drew on it a little," giggling as she continued. "Needless to say it wasn't exactly an improvement! But mom never said a word. She just set up a canvas next to her own and I became her little partner."

Hilda's illustrations would fill the pages of Vogue and the catalogs of luxury retailers from the 1940s through the 70s and Liz's drawings would fill the walls of her mother's studio.

What Hilda could never have imagined is that in 2010, six years after her death, Liz at the age of 52, would actually be the one to take her mom on as a "partner" -- creating reproductions of her late mother's legendary drawings, with the hope of finally giving them the recognition she so richly deserved.

"Mom was the breadwinner in our family for many years, but it was Dad who got all the accolades. His art hung in museums with the likes of Georgia O'Keefe and is still sold in galleries today. For the most part, Mom's originals remained hidden away in a white cabinet in my parent's work room."

It was that white cabinet that spoke to Liz, one hazy morning, as she pondered how she might supplement her income during a down economy. After her mother had moved to a retirement community in Philadelphia, Liz had become the custodian of the 1950s cabinet, moving it lovingly -- but not easily -- from the city to her waterfront cottage in Sag Harbor and then once again to her current home on Long Island. As an established architectural photographer, Liz had spent more than 30 years capturing the perfect picture. That morning, she looked up and realized that the most perfect pictures were in front of her and it was time to bring them back to life.

"Ever since I was a child and my mother dressed me in mini-skirts and turquoise go-go boots, I have shared her love for fashion -- especially vintage fashion," Liz said. "When I was in my 20s, I lived near a vintage store and every morning I'd go through the bags before the clothes even hit the racks. I remember finding this pretty, deep pink coat with huge four-inch buttons and bringing it home to show my mom. Her eyes lit up when she saw it and then she went to the white cabinet. There it was -- an illustration she’d done in the 60s -- of that very coat! Seeing it again brought her so much joy.

"I felt like if I could create a virtual white cabinet -- a place where people who love vintage fashion the way my mother did, and the way I do, could share that joy -- it would be an amazing way to celebrate my mother's work."

So that morning, Liz once again, lovingly applied her own art to her mother's -- only this time with a camera. She photographed the works that lived in the white cabinet, borrowed illustrations that she'd given as gifts to her mother's friends and brought home the drawings that had been hanging in an East Hampton gallery. Once she'd captured all the images, she took them to a fine art printer who created classic reproductions. Soon, TheWhiteCabinet.com was open for business and Hilda Glasgow was holding court.

"I couldn't believe it when our first sale came in," Liz remembered with the excitement still in her eyes. "It wasn't just for one, it was for two! But it was that second sale that completely took my breath away. I'd often thought, Wouldn't it be great if the designers on Project Runway could use my mother's drawings as inspiration? I'm such a fan of that show. So imagine my surprise when the second sale on the site was to designer Michael Kors! I feel like my mother is in the next room, making all of this happen."

Since launching her site in September of 2010, Liz has expanded her collection to include timeless note cards and wallpaper featuring her mother's illustrations. While she hadn't planned for this second career, second acts do kind of run in the family. Her mother, after establishing her full and illustrious career, gave birth to Liz, her first and only child at 45.

"I think my mother would want everyone to know it's never too late to take a new direction," she said laughing. "Sometimes you just have to take a leap of faith."

Sign up to receive my email newsletter each week – It will keep you up-to-date on upcoming articles, Mondays with Marlo guests, videos, and more! 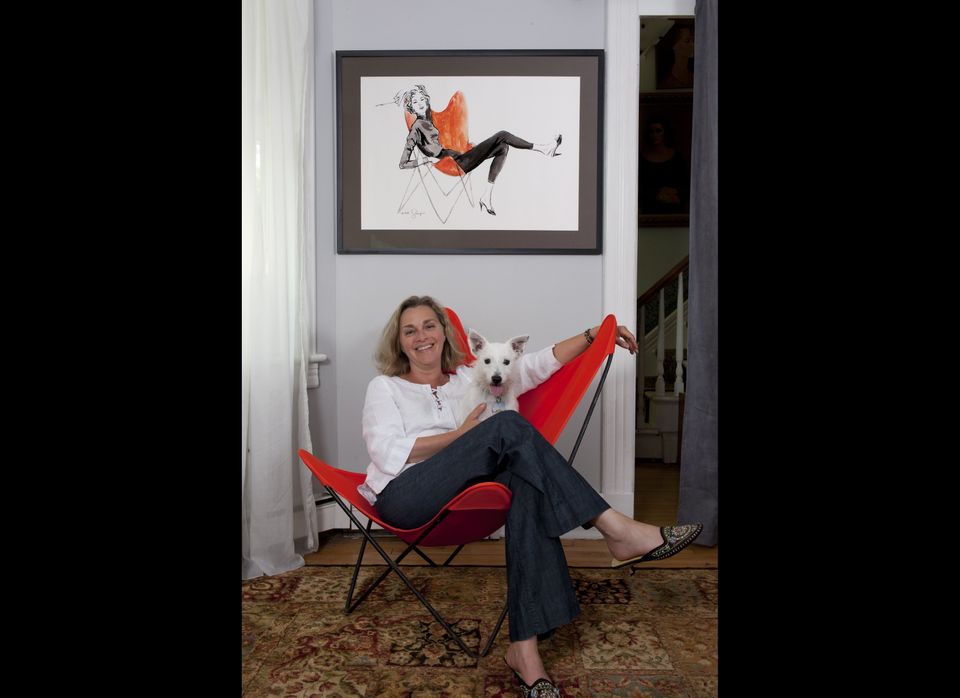