How do you write someone out of history? It's easy. Just don't mention them. Or just photoshop them out of the picture.

By now, most of America, if not the world, has seen the iconic photograph of the Osama bin Laden mission from the White House Situation Room. The image, released by the White House, shows President Barack Obama and his national security team and advisors, including Vice President Joe Biden and Secretary of State Hillary Clinton.

An iconic photograph can last a lifetime. From the U.S. soldiers raising the flag at the Battle of Iwo Jima to the Pulitzer Prize-winning photograph of Nguyen Ngoc Loan executing a Viet Cong officer, images leave a lasting impression of the moments that make up history. Most importantly, they document the events and people present for historical record.

On May 6, 2011, a New York-based Hasidic newspaper, Der Tzitung (sometimes spelled Der Zeitung), ran the White House photograph with two glaring omissions. They removed two women from the reproduction: Secretary Hillary Clinton and Audrey Tomason, the Director of Counterterrorism. The newspaper cited religious beliefs as their reason for not publishing images of women.

This is the original White House photograph. 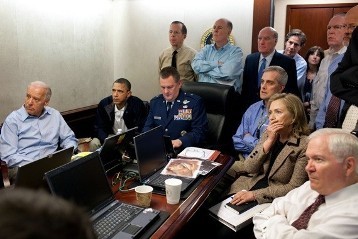 This is the altered Der Tzitung photograph omitting Secretary of State Hillary Clinton and Director of Counterterrorism Audrey Tomason. 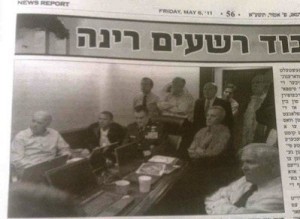 This recklessness is common in the telling of history. Despite the facts of the situation or the truth of the matter, omissions are made. At best it is an oversight, and at worst, it is intentional. Societal beliefs and agendas have rewritten numerous histories over time.

Regardless of the reason, when you edit history, whether it is a photograph, a document, or a testimony, you do a disservice to the truth. It means the complete history is not being told. The omission of the Secretary of State and the Director of Counterterrorism severely changed the historical record of that moment. What if this altered image of that night was the version that ran in high school textbooks 100 years from now? It should make us all pause and think what other versions of history have we been taught that were edited.

The recent film, The Conspirator, is an attempt to show the mainstream public the long-forgotten role of Mary Surratt in the Abraham Lincoln assassination. Recent scholarship on the Lincoln assassination and trial shows that Mary Surratt was deeply tied to the Lincoln conspirators and teaches us that she was the first woman tried and executed by the U.S. government. However, almost immediately after the actual trial, her involvement was written out of newspapers and public opinion of the late 19th century because a cold-blooded, woman-murderer did not fit into Victorian standards of the time. The point is not to celebrate a woman assassin, but to present an accurate historical record.

When Elvis Presley, Jerry Lee Lewis, Carl Perkins, and Johnny Cash appeared at Sun Studios together in 1956, Sam Phillips had the bright idea of calling a local newspaper photographer to snap the now legendary photo of "The Million Dollar Quartet." Cropped out of the photo is Marilyn Evans, a Vegas showgirl who was with Elvis at the time. Again, societal caution and a commercial agenda removed a woman from a moment in time, in this case one that defined the early days and culture of Rock and Roll in America.

This is the original photograph of "The Million Dollar Quartet" with Marilyn Evans from 1956. 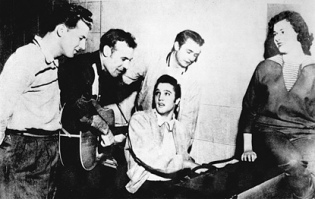 This is why Mary Magdalene's gospel is not included in the modern Bible. This is why Cleopatra's 20-year reign has been reduced to a story of a wanton seductress. This is why Artemisia Gentileschi's art will always be seen through the lens of her rape trial and not as the work of a brilliant Baroque master. This is why Anne Boleyn is characterized as a gold digger instead of a woman who fought off sexual harassment for six years. This is why Harriet Tubman has not posthumously received a Medal of Honor for rescuing hundreds of slaves in the Combahee River Raid during the Civil War. On the other hand, it is only through a clear, accurate record of letters that we know Abigail Adams was just as much a Founding "Father" as her husband, John.

With the publishing of the altered White House photograph, the same historical mistake has happened again. The presence and involvement of two women in a historic moment has been erased from the documentation of that moment. It was that easy.

Was the newspaper intentionally trying to change history? Probably not. Did they? Yes. Whether a whitewash or an accident, two women were in that room for a reason and removing them from the historical record robs posterity of a full account of our history. We are all custodians of our collective history and it is essential that we strive to present and teach an accurate depiction of historical moments, despite our personal beliefs.