People infected with HIV, the virus that causes AIDS, have a harder time than healthy individuals recognizing fear in the faces of others.

This trouble with emotional recognition may reveal subtle cognitive deficits caused by the disease, researchers wrote today (Feb. 26) in the open-access journal BMC Psychology. Previous studies have found that HIV (human immunodeficiency virus) is linked with abnormalities in the frontostriatal region of the brain, communications corridors that link the frontal lobes to deeper brain structures.

HIV and the brain

Baldonero and her colleagues recruited 49 HIV-positive adults from a clinic, making sure that none of the volunteers had a history of psychiatric or neurological disorders. HIV itself can affect the brain, Baldonero told LiveScience, but better drug therapies have made neurological problems less of an issue. Nevertheless, the team wanted to find out if there were any subtle deficits in the brains of patients. [The 10 Most Stigmatized Health Disorders]

For comparison, the researchers also recruited 20 healthy adults chosen to be similar to the 49 HIV patients in age, gender and education. Both groups underwent a battery of neurological tests, including a facial emotion recognition task. In this test, patients saw male and female faces displaying disgust, anger, fear, happiness, surprise and sadness and had to match the name of the emotion to the face.

The HIV-positive patients were less accurate at identifying fear compared with the healthy adults, the researchers found. Even patients without any other signs of cognitive struggles on the other neurological tests performed worse than healthy people at telling when a face was fearful.

Fear might provide a particular challenge, because other research has shown it to be the most difficult emotion to recognize, Baldonero said. It's also possible that HIV affects specific brain regions that are more important for processing fear than other emotions. 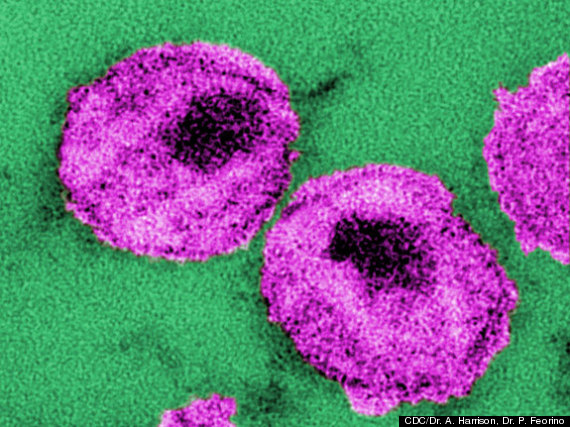 HIV, or human immunodeficiency virus, particles in purple, cause the disease AIDS.

The researchers did find that trouble recognizing fear went hand-in-hand with another high-level task, a word memory test.

"The two abilities (emotion and cognitive) may be subject to the integrity of the same brain areas," Baldonero wrote in an email to LiveScience. "It would be useful to explore this issue in future studies."