Dick's (Michael Hampton) a mess. He's a horrible stand-up comedian (talk about dying up on stage), a fact we don't need to learn from Harry (Brent McEwan), the club owner who cans him. His girlfriend's left him, his roommate Steve (McEwan) has moved out. Jayne (Nicole J. Adelman) is a mess as well. Not only is her boyfriend Alex (Ben Weaver) in jail (her fault, sort of), she's pregnant. Dick may be in the doldrums but Jayne is off the rail. Unaware of dating platitudes and red flags like opposites attract and don't get involved with someone with more problems than you, they meet at 2 a.m. in a Ralph's. They don't so much hit if off, share interests, and plan a future as much as they manage, somehow, to merge their idiosyncrasies and psychoses, the result being the hilarious Dick and Jayne Get a Life, written by Peppur Chambers, directed by Les Wieder, and given its world premiere at the Lounge Theatre.

Proving that love is blind, not to mention merciful, the production takes two hapless characters, gives them a motive, an opportunity, and a means to get together, and then allows them to forge what passes for a relationship. The challenges each character face are as funny as they are formidable, not because they're so deal-busting impossible but because they're so real: the utter lack of self-confidence, the penchant for self-analysis and -destruction, and the Sisyphean determination to push on after a prior relationship goes sideways. The prospect of them actually getting together, of getting a life, is so dim that a large part of the experience of the production is reciting "No way, no way, no holy way" and then being delighted (because, admit it, we're all got Dick and Jane tendencies) when they ultimately cobble together, if not a thriving relationship, then at least a system of acceptance and mutual support. 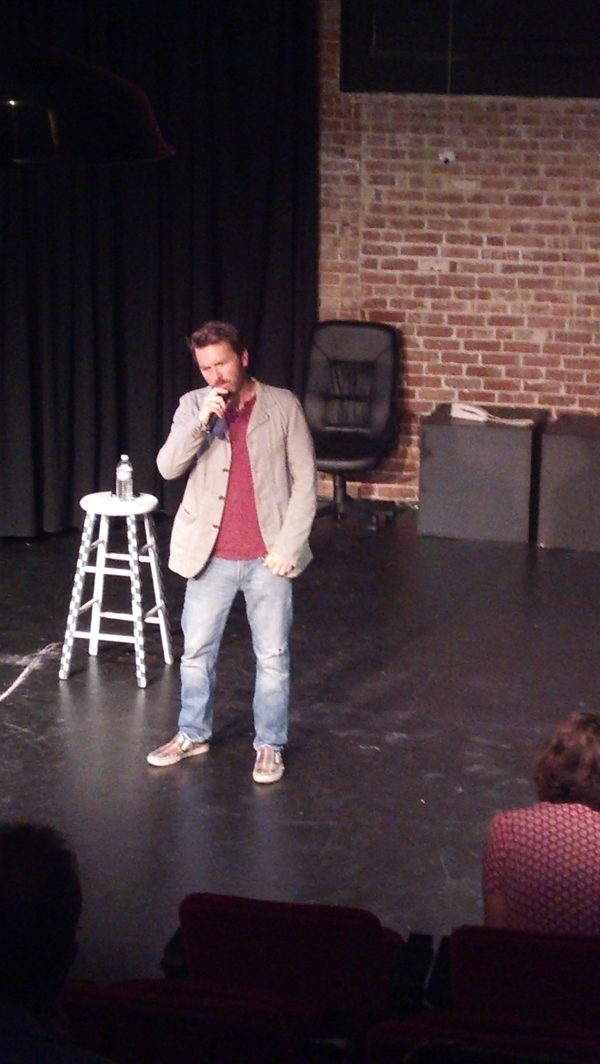 Hampton does an amazing thing with Dick. He makes him a horrible comedian. Horrible on purpose: that's not as easy as it might seem. The show opens with his stand-up routine. It's fist-clenching execrable: it's flat, his jitters are not in the least endearing (I swear, you can hear him sweat), and, I'd call it old man humor but that would be an insult to old men. Fortunately, his Dick (there are, of course, an abundance of dick jokes) knows he's awful. He also knows that Jayne spells doom, but, like a moth attracted to a supernova, that doesn't stop him from going out with her.

Adelman is equally adept with Jayne. She plays her moody (read: tumultuous), a nominee for Most Likely to Fly Off the Deep End. Instead of withdrawn, though, she makes her, if not desirable, then at least approachable. After all, she has (or had) a boyfriend and she's not afraid to scold Dick, who, unable to find the vanilla ice cream in the supermarket freezer (really, his girlfriend left him for that?), for letting all that Freon into the atmosphere. Layer by inexorable layer she reveals her Jayne deadpan, which certainly makes her funnier, more believable than if she let her crazy all-out-at-once. 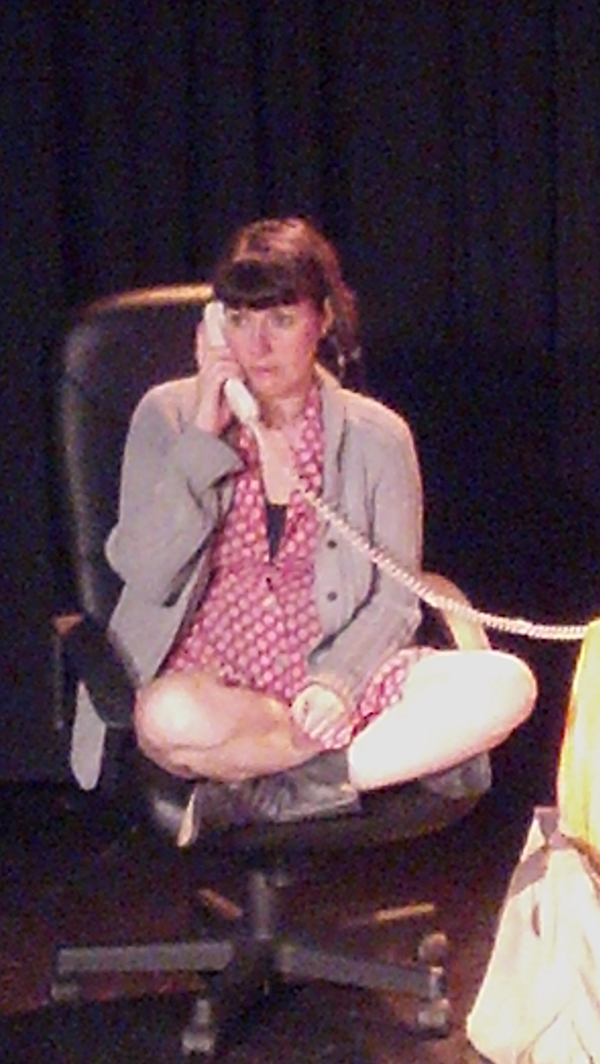 Despite the messes of their lives and because of the encouragement of George (Richard Lewis Warren), Alex's jail's sheriff and Jayne's mother Mary (Chambers), the odd couple + soon-to-be one make a go at love. Of special note: Chambers filled in as Mary because of a last second personnel malfunction. Of course she knew the words, she bloody well wrote them, but, with one night notice, she got into them as well, making her Mary prove beyond any doubt that the fruitiness that is Jayne didn't fall far from the tree. Mention, too, must be made of Hanna Leister who, dressed in undertaker black, provided ring tones for various phones. Trust me, it's far, far funnier than can be described here.

Dick and Jayne Get a Life may not offer us the consolation of any aw-shucks, isn't that sweet moments or coups de foudre. What it does offer, though, is the chance for two unextraordinary and flawed people to somehow make the quantum leap from individual disastrous lives to a shared disastrous one, thus confirming the immutable law that for every Dick there is a Jayne, just like in the books that taught us to read. 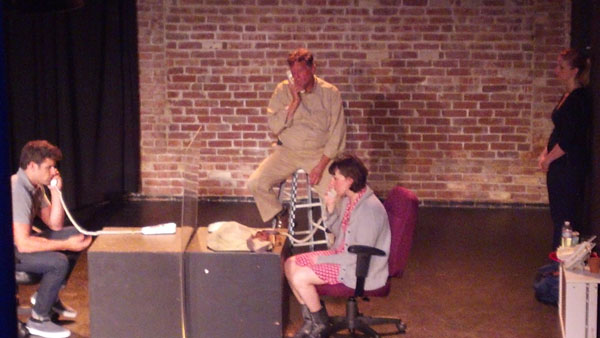 The show, alas, closed on Saturday, June 29th. For more information on the show, however, please visit: http://www.hollywoodfringe.org/projects/1307. 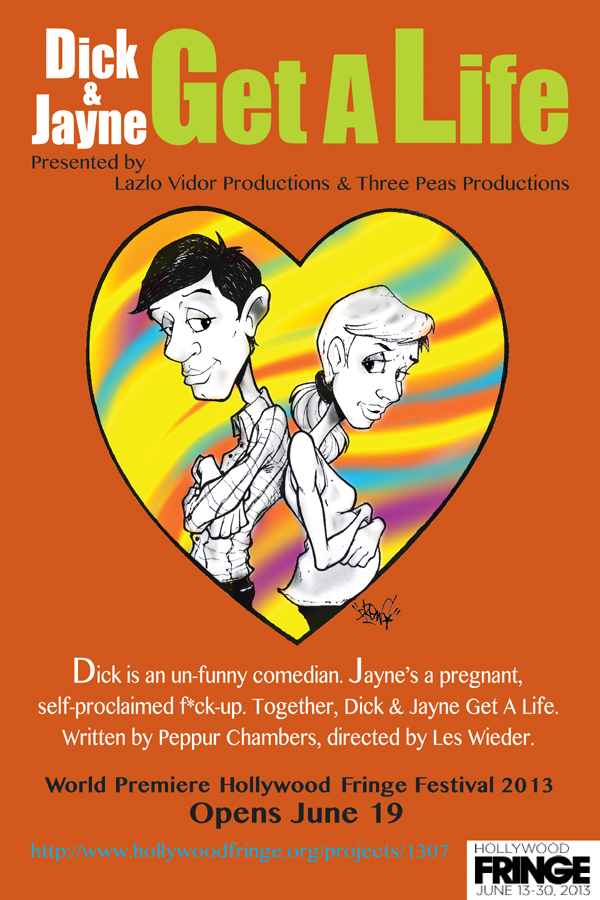