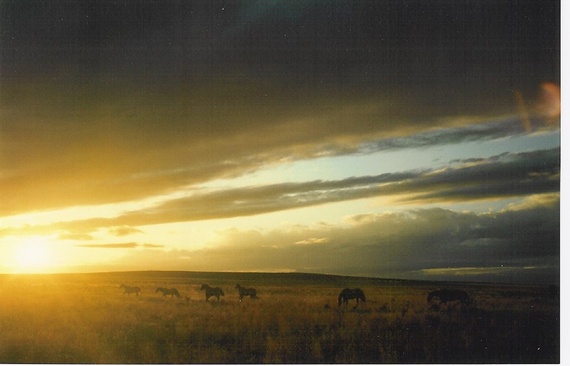 For over two decades I have been teaching the principles of Natural Horsemanship (or what was once referred to as "Horse Whispering") helping humans create better relationships with their horses. During this time I became fascinated with the ability of horses to not only cause humans to become better riders as well as better people, better partners, better friends and better parents, but to actually facilitate in the healing of a wide variety of human emotional wounds that included veterans with PTSD, children with Autism and Youth at Risk.

My new book, Riding Home ~ the Power of Horses to Heal was my attempt to share this remarkable ability of horses to initiate emotional and mental healing for humans by using their physical equine body language to communicate and create mutually compassionate relationships. To support and make manifest the reality of this horse/human healing interaction I specifically relied on research that was exclusively scientific and experiential.

Even though I felt my desire to increase the awareness and support for equine therapy would be best served scientifically, I have personally always believed that there is also a spiritual component that exists among all living creatures on our planet.

Years ago I came across this quote in a gallery in Great Barrington, Massachusetts. I believe it is the best definition of spirituality that I have ever read. What is says with such simple elegance is what I believe about our world: we, and everything in the universe, are all connected.

Everything is determined, the beginning as well as the end, by forces over which we have no control. It is determined for the insects as well as for the stars, human beings, vegetables or cosmic dust - we all dance to a mysterious tune, intoned in the distance by an invisible piper.

I believe that this "mysterious tune" is a shared consciousness that is always present in all things: in particular animals and in specific, humans and horses. Anyone who has ever had a close relationship with an animal whether it be a cat, a dog or a horse will tell you that sometimes there is an invisible yet palpable feeling of consciousness between them e.g. "sometimes my dog actually knows what I'm thinking."

Many years ago I had the privilege of participating in a horsemanship clinic with the late Tom Dorrance; considered by most to be the grandfather of today's Natural Horsemanship. When the clinic ended I asked Tom what books he would suggest I read. He said there were two: Dressage by Henry Wynmalen and Kinship With All Life by J. Allen Boone. I remember thinking that these were the last two books I would have ever imagined an old California cowboy would recommend. Today, having had the opportunity to read them both I now understand why he chose them.

The principles of Natural Horsemanship are based on not only creating a physical relationship with your horse but one that is also mental and emotional. Horses, like humans, think and have feelings. Without communicating with a horse on all three levels you can never truly establish a relationship of mutual trust and respect much less a willing partnership with you as the senior partner or leader. This is also a prerequisite for Classical Dressage.

Unless you can influence your horse mentally and emotionally (his mind) you will not be able to influence him physically (his feet). When I asked Tom for help, since no one had yet written any books on "Natural Horsemanship" he simply recommended an excellent book on Classical Dressage. He knew it was based on the same principles and methods of horsemanship that he believed in and taught.

When I finished reading A Kinship With All Life at first it seemed almost child-like. I now understand why this was Tom's second recommendation. It's a collection of stories about some amazing relationships humans have had with a number of different species of animals. I believe this was Tom's way of helping me to recognize that in addition to the mental, emotional and physical there was also a spiritual connection that was possible and could exist in the horse/human relationship. He knew and believed this and with this book hoped to pass on this knowledge to anyone who had an open mind. His attitude and spiritual connectedness toward horses is what made Tom Dorrrance so special.

Whether one chooses to believe in a spiritual connection between human and horse is an individual preference. Certainly it's possible to achieve a high level of horsemanship and riding ability without it. I have found that once I allowed myself to accept the possibility that the invisible connected consciousness I felt between me and my horse Austin was real, our relationship improved, it went to a deeper level and I became more humble and more teachable.

As I have gotten older I have come to see spiritual connections turning up everywhere in my life. This was not always the case. Years ago I would have not even entertained the idea that such a concept was possible without some scholarly scientific validation. I guess I still have some of that in me because the thing I like the most about the above quote that I believe defines spirituality is that it was written by Albert Einstein.


To learn more about Tim's new book, Riding Home - The Power of Horses to Heal please visit: http://www.ridinghome.com Every book ordered will help to benefit veterans with PTSD, at Risk Youth, children with autism and children of families in need. It is this amazing power of horses to heal and teach us about ourselves that is accessible to everyone and found in the pages this book. Articles & blogs by Tim Hayes are at: http://www.hayesisforhorses.com.
For clinics, classes or private sessions contact: tim@hayesisforhorses.com

Author of 'RIDING HOME ~ The Power of Horses To Heal'