How do restaurant chefs manage to serve multiple dishes to different people at the table at the same time, when it is clear that the preparation time is different for all of them?: originally appeared on Quora: The best answer to any question. Ask a question, get a great answer. Learn from experts and access insider knowledge. You can follow Quora on Twitter, Facebook, and Google+.

First of all, the preparation time is comparable for most dishes in a typical restaurant. Each can be put together in somewhere between 4-10 minutes. Restaurant kitchens do a lot of prep work in advance, all the chopping and sorting things into containers, everything that doesn't need cooking over a flame or arranging on the plate. Everything is in the right place so the various cooks can grab them in a moment and toss them in the pan. In French that's called mise en place. Sometimes it's up to the waiter or food runner to do the garnishes and other final items. 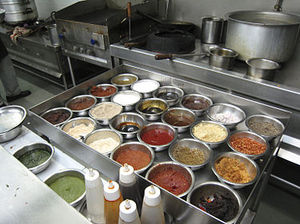 Dishes like soufflé that take a long time are usually left off the menu. Other things, like chicken and pizza are cooked in a few minutes in super-hot ovens that would take you half an hour or more in your puny home kitchen. 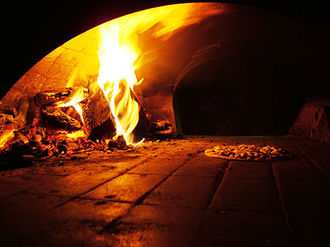 If it can't be cooked quickly it's off the menu, or modified, or prepared as much as possible ahead of time, or if absolutely necessary, either the menu or the waiter will caution you that this dish takes extra long and negotiates how you and your table would care to deal with that.

Within that 4-10 minute zone (or longer, for special dishes), it's not the chef who makes sure the whole table gets served together, it's the entire staff. At a fancy enough restaurant, your waiter or a floor manager is watching your table, and in an open kitchen they're keeping an eye on the dining room as well. They see when you are getting settled, how you are doing with your drinks, when you're finishing up the appetizer, whether you seem to be taking it slow or fast, the rhythm of the table.

Have you ever watched a wok master, someone who can cook an entire Chinese dish in several minutes, and everything comes out perfectly done from the same wok even though different ingredients need to cook for different times at different temperatures, some steamed and some seared? They're conducting an entire symphony in their bowl.

That's sort of how it is at a larger scale in a restaurant, only involving multiple people and pots and pans, and plates for assembly.

When it looks like the right time, the waiter will "fire" the dishes, meaning keying into the point of sale system an instruction for the kitchen to start. There it goes to a food expeditor, someone who stands around in the kitchen like a conductor making sure everything is getting cooked in the right sequence. Depending on the restaurant that may be the head chef or a deputy, or a specialist. The whole thing is like a synchronized ballet, or perhaps you could analogize it to a builder making a house and making sure everybody does their part on time. Between the expediter and the line cooks they're juggling different tables' dishes all at the same time. The dishes that will take 10 minutes get started 4 minutes earlier than the dishes that will take 6 minutes. Meanwhile, they're doing this for a lot of tables at the same time.

This sounds hard, but keep in mind these people are professionals, they do it every day for years and years. It's down to instinct and intuition.

Have you ever gone to the bathroom, or outside to smoke or make a phone call, and found your meal ready and your dining companions already eating? That's bad service, either they don't know or don't care, or the waiter is having a snit. At the best restaurants when you come back your napkin is re-folded, your chair tucked in, and the entire table's dishes magically appear as soon as you come back, even if that means re-cooking the entire meal that went cold while you went outside. You think it's a lucky coincidence? That's good communication between the servers and the kitchen, and the staff burning time and money to make everything look seamless -- so have some mercy and don't make long phone calls between courses!

At some traditional restaurants, a domed plate cover can ensure that everything is fresh-out-of-the-pan hot. They roll out a big cart full of food to a strategic hidden place, then a squadron of waiters and food runners attacks your table from that base like an aircraft carrier.

At the other end of the scale lazy restaurants don't bring it out at the same time. Or else they go to so-called "family style" where the dishes come out as they're ready. At best, that is a nice concept and it frees the kitchen to concentrate on making good food, not synchronizing service.

When it doesn't work there are some failsafes. There's often a counter under heat lamps where you can put a dish that comes out too early waiting for the others to finish, or waiting for the waiter to show up, or for the customers to finish their appetizers. At worst there's the microwave. A kitchen can be "in the weeds" because of understaffing, or a big mistake, a packed house, everybody being tired, an extra large table where everything has to come out, or too many people ordering the same dish at the same time, and you get the equivalent of a traffic jam, meals take half an our or even an hour to come out instead of ten minutes. Not only will the timing fail, your food comes out cold, or dry, or overdone.