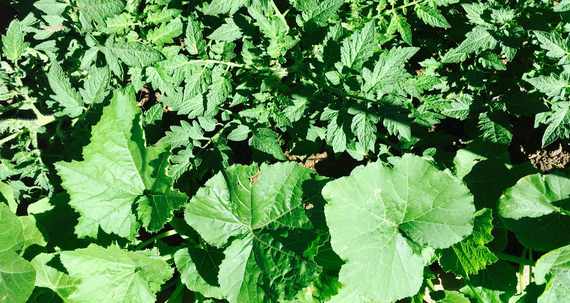 My great grandfather was a truck farmer, delivering produce door-to-door like a milk man, which means he was the original 1920's CSA. His son -- my grandfather -- was a county farm agent in Central Pennsylvania. For over forty years my grandfather's job was to visit farmers and teach new techniques, like contour plowing.

When I was a kid, my grandfather took my sisters and I strawberry picking every June. This is probably my earliest garden memory. What could be more gratifying to a child than juicy, red nuggets of sugar, free for the taking, as far as the eye could see?

Somewhere in my teen years I tucked 'gardening' into a journal entry titled 'Interests'. At my wedding last fall, my best friend reminded me of a community garden plot that I held for a year when we lived in Cambridge. Mine was the worst plot in the garden. It was less of a dirt pile and more of a shady, bottom of the slope, algae coated puddle. The few meager peppers that did develop on my spindly plants were plucked off by some passerby who must have thought my garden so pathetic that their theft wouldn't make a dent in my sadness.

Later in the Cambridge years I met a woman who had a small vegetable patch in the front of her apartment. Her plants grew like gangbusters, doubling in cubic feet of greenery each time I visited. The bounty she harvested from 8 square feet was almost embarrassing. When I asked around, I heard that her boyfriend studied agriculture in college. When I asked her point blank how she did it, she smiled sweetly and said something about the unusually warm weather that season.

In college, I made a friend who taught me how to bake bread. She aspired to be closer to her ingredients and interned on a farm our sophomore year. She and her intern manager, now husband, went on to be real life, full time farmers. They grow vegetables for market on sixteen acres in Sonora, California. My husband and I have spent hundreds of hours playing with their dirt, children and chickens.

This spring we were lucky enough to move into a place with five 4x5 foot raised beds and after a decade of much passion but just mediocre success we are finally growing a garden worth bragging about. As we've discovered the hard way, there are a few important things that in combination will help your garden grow.

1. Dirt, First and Foremost
My mother always said, "you need great soil to garden well," but what does that mean?! I never saw people with really lush gardens mucking about in the dirt. By the time gardens are in a state to impress the ground is often not even visible through the foliage. In that Cambridge community garden it didn't even occur to me to touch the soil. I just plopped some young plants on top of the mud and hoped for the best.

I thought that it was luck of the draw, you got a community garden plot with soil, or you got a mud puddle. You either lived on a fertile river bank or you lived in a city with a concrete patio. I never thought about the consistency of dirt, or the possibility of adding things to amend existing dirt, but this is by far the biggest part of the growing equation.

The truth is, if you have crappy dirt there is nothing you can do to make your plants happy. (I'm sure there is a metaphor for life here, somewhere.) Plants need food, just like people. If you put a plant in a pot with fresh out-of-the-bag potting soil and remember to water it, it will probably be fine for a while. But, eventually you will need to feed it something or it will die.

Some plants die every year. This is just what they do. Some plants die more than once a year. Basil for example, will sprout some tasty leaves, but sooner than later it will try to reproduce and make flowers. If you forget to pinch off the flower buds the leaves will turn bitter and the plant will be all but worthless.

Other plants -- perennials -- live for many years like bushes, or trees. Most things you'd want to grow in a garden are annuals, meaning they produce for one season and then that's it. Tomatoes, peppers, cucumbers, lettuce, squash, carrots and radish are all annuals.

But, back to the dirt. If you want an amazing garden, chances are you just need a lot of compost and chicken poop. Or straw soaked in horse urine. Mix those goodies right into whatever other dirt you have on hand (in your yard, in your raised bed, in your potting soil) and your plants will grow faster than you would have thought possible.

'Mix' is the key word here. If you want to plant in last year's soil caked with roots, you'll need to pull those roots out and break the dirt up. If you are planting in the ground for the first time you'll likely need to go at your patch with a pitchfork to loosen up the dirt to the point where it's mixable. Unfortunately, just dumping the good stuff on your hard compacted yard won't get you the garden of your dreams. A couple of times throughout the summer, it's a good idea to mix up some liquid fertilizer into water and give your plants a snack. You should amend your soil at least once a year, every year, unless you've learned some next next level growing tactics like crop rotation or winter cover cropping.

2. Low Maintenance Watering
There is a right way and a wrong way to water your garden. The wrong way looks like a quick sprinkle with a hose or watering can. Even if you do this once a day the dirt just below the surface can be dry as a bone. By shallowly watering your plants you're encouraging them to send roots out near the surface, where they dry out the quickest which in turn requires more watering.

The deep soak method of watering is much more effective (imagine a long, slow bath). You want your plants to send their roots deep into the ground where they are less likely to dry out and more likely to find nutrients. Deep soak watering takes longer each time but you don't have to do it as often. If you really want to cut down on watering you can deploy drip tape or a soaker hose. These devices lay on top of the soil permanently and slowly seep water over many hours. Added benefits to drip tape include lower overall water usage and easier pest management since top down watering can encourage the spread of spore based diseases, like tomato blight.

3. Let There be Sunlight
Most of the plants we eat need a lot of sun. As with watering, the question of how much is not always obvious but six or more hours a day of full sun is a good baseline. Plants with Mediterranean origins (eggplants, peppers, tomatoes) like afternoon sun and warm soil. If your tomato plants aren't getting enough sun, they will grow a ton of leaves in an attempt to absorb more light. You'll have mammoth bushes but no fruit. True story.

Right now we have a bed of onions that is too far in the shade. The poor little guys are stretching their tops towards the sun so hard it's almost painful to watch. Some plants (not onions) do okay in partial shade, especially cool weather crops like lettuces and brassicas. (Try throwing 'brassicas' around at your local farmer's market, instant street cred.)

4. There Will be Pests
Everything eats everything else outdoors and plants fuel the food chain. Pests will come in waves, depending on the time of the year, the distance from the moon to the earth, the moisture levels in the ground and the circadian rhythms of actual cicadas.

Even if you get your aphids under control, there will be plant decimating caterpillars; and once you pick every last caterpillar off your greens, there will be an invisible fungus that causes leaves to shrivel and turn white. Or, a blight, or the snail population will explode, or the caterpillars will return to spin cocoons on the undersides of your eggplants, or small burrowing creatures will pull your radishes down into the earth from below. And so it goes until fall. Lucky is the farmer that gets to eat anything at all.

Thankfully, there is the internet. If you're vigilant and do a lot of googling you can find solutions to most garden ailments.

The Long Game
Even in the best garden ever, the work is often slow and uncomfortable and strewn with little failures. Of the 25 strawberry crowns I planted this spring only two are still alive and it was not due to a lack of sun or water. The soil pH could have been too low, or I might have overwatered, or my favorite new pest, the Honeydew Ant, could be to blame.

In spite of the strawberry famine, our peppers are happy and our spinach, tomatoes and squash are all thriving (see cover photo). With persistence and an understanding of the basics I'm sure that you, too, can grow in-season tomatoes, sun warmed peppers and never refrigerated spinach from your very own fire escape, patio or backyard garden.

And, if all else fails, there is still the joy of watching and waiting, of figuring things out, of time outdoors and dirt under your fingernails. The fruit is sweet, but the journey is sweeter. Good luck out there.

More:
learninghealthy livingFoodoutdoorsGardening
Newsletter Sign Up
The essential guide to taking care of your mind and body
Subscribe to HuffPost’s wellness email
Successfully Subscribed!
Wellness delivered to your inbox