I never imagined that becoming a "baseball mom" would send me to the heights of wonder and propel me into the abyss of my own limitations, as a parent and as a human being. Over the past four years of shadowing my son on the very competitive travel baseball circuit, I've seen it all -- the good, the bad, the ugly. I'm embarrassed to say that I've contributed to the "ugly" at times.

Witnessing my own shortcomings and lack of self control in the bleachers, I've learned that living a spiritual life isn't necessarily about sitting on a yoga mat, or in church, or in a temple. Those things are nice and they can help us to find balance, but it is about much more than that. It is about reaching deep within ourselves to find the courage to forgive and act with compassion and kindness, even in those moments when we find ourselves sitting across from someone who has activated those dark places within us that make us want to cause them pain. Living a spiritual life is about being on a Little League baseball field, watching someone intentionally hurt our child, and responding to the situation with love rather than anger. I'm not saying that we should put a child in danger, or roll over and let other people use us as a doormat, but by honoring ourselves and others, in good times and bad, is how we can truly make a difference and let our own light shine while helping others to shine a little brighter too.

Perhaps it is no accident that a baseball has 108 stitches and a prayer necklace has 108 beads. Baseball does not discriminate and we do not have to believe in the same God to be on the same team. It is a game of courage, strength, and character that can bring grown men to cry. As easy as it appears, it is heartbreakingly difficult. Anyone who has ever stood behind the plate knows that there are no guarantees that your preparation, hard work and perseverance will be rewarded, but without them you will surely strike out. But baseball is a game that embraces failure; an arena where striking out two-thirds of the time is considered success. Former Yankees manager, Joe Torre, frequently reminded his players of his own experiences with failure. He told them about the season when his batting average dropped by 90 points, just one year after earning the batting title and how he once batted into four double plays in a single game. To fail is human, but making the choice to get back up again after failing is superhuman.

This spring is the first time that my son has ever been on a team that has never won a game and, surprisingly, it has been my favorite season of all time. Aside from the game when the opposing coach felt the need to rack up 10 runs in the bottom of the last inning of a game after our 9th player had been sent to the hospital to have his face reconstructed because he was hit by a pitch. Our boys end each game with smiles on their faces and they support each other through thick and thin. Despite our losing record, there have been plenty of victorious moments and celebrations. The boys seemed to know intrinsically that "winning isn't everything," but that lesson came harder for us adults. As the season went on and we saw that our kids actually looked happier after the game than the kids who had won, we gradually got the message. Sometimes the greater lesson lies in falling down and getting back up again with a smile on your face. The next time I face adversity in my own life, I will think of our courageous little Titans! 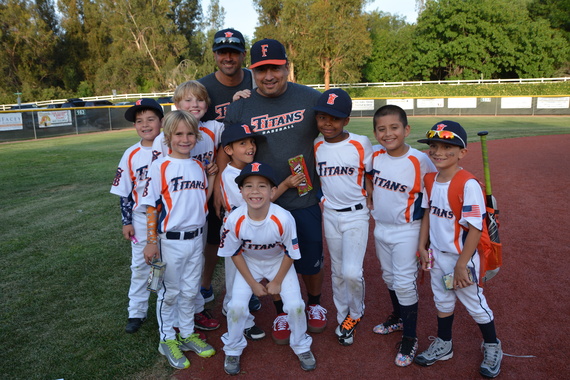