Everyone thinks their contribution to being sustainable won’t make a difference. That is simply untrue.

The power of one person “going green” can have a much bigger impact on the world around us than we realize. According to the NRDC, a pound of carbon dioxide could fill a ballon the size of an exercise ball -- and the average American releases the equivalent of 57 pounds of carbon dioxide, or 57 of these balloons, into the atmosphere every day.

Below are some examples that illustrate how even our seemingly small environmental efforts are changing the world around us, brought to you in our partnership with NRG.

Participating in Meatless Monday: Can save the equivalent of 1,089 balloons of carbon... if not more. 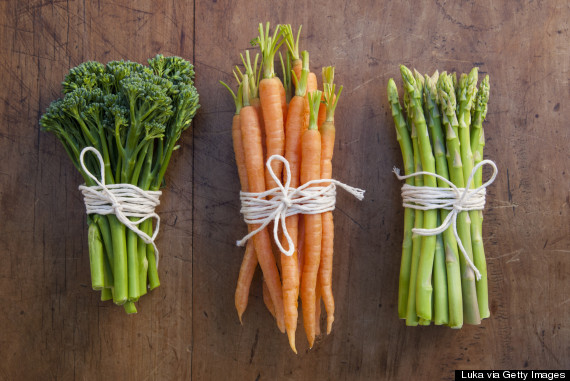 In 2012, a discussion on NPR's Morning Edition show confirmed what many of us already knew to be true: Americans eat a lot of meat. In fact, the average American consumes nearly a quarter-pound of meat per day, making the U.S. one of the highest meat consumptions per capita in the world.

Putting aside factory farming and welfare considerations, the methane emissions, water consumption and other environmental issues surrounding the meat raised and slaughtered in the U.S. are significant; more than 59 pounds of carbon emissions are released to create just one pound of consumable beef (and nearly 90 carbon emissions are released to process one pound of consumable lamb meat). By participating in Meatless Mondays and cutting back on eating meat just one day per week, you could be saving more than 1,000 pounds of carbon emissions every year.

Swapping out one car ride per day with a bike ride: Can save the equivalent of 1,324 balloons filled with carbon per year. 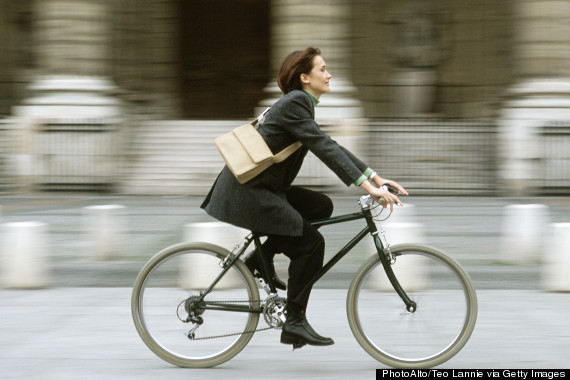 According to the U.S. Department of Transportation, the average American drives about 37 miles per day. That includes going to work, the grocery store, your friend’s house, and more. Imagine if you swapped out just one of those daily trips with a bike ride -- a zero-emissions transportation method. Even if that trip is only 2.5 miles each way, or a 5 mile trip overall, you would you be saving literally thousands of pounds of greenhouse gas emissions from being released into the atmosphere, AND doing some good things for your health.

Taking public transportation to work twice a week: Can save more than 2,000 carbon-filled balloons every year. 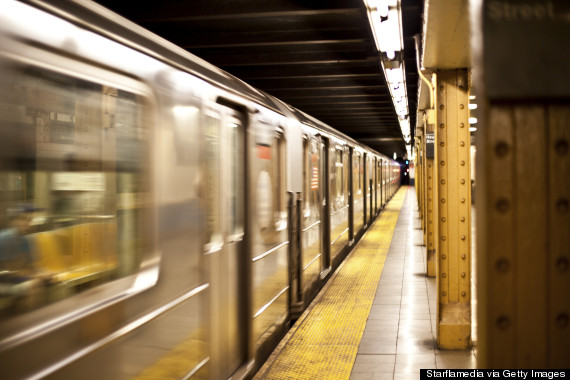 Riding the bus or taking the train to work may seem like a pain; after all, public transportation rarely takes you directly from point A to point B like a car does. However, even swapping two round trips a week on public transport can make a huge environmental impact. Consider this: According to the New York City MTA, the average subway ride saves 10 pounds of carbon emissions per trip over driving a car. That one trip is equal to the carbon footprint created by a month’s supply of disposable paper coffee cups. How’s that for elevating your morning routine?

If your family only uses reusable bags for a year instead of one-time use plastic: Can save 2,095 balloons of carbon. 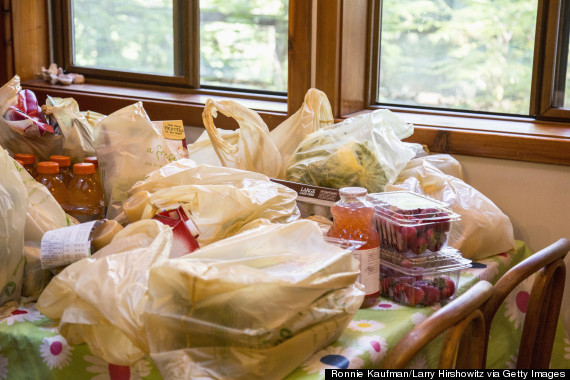 By swapping out your plastic bag use, you could be saving enough petroleum to power a car for 108 miles.

Americans use an exorbitant amount of plastic bags -- about 1,500 annually per family, according to the NRDC. Not only does this lead to a shocking amount of waste, but those bags use a massive amount of oil to be produced. In America, 12 million barrels of oil are used every year in order to produce 30 billion plastic bags.

Cutting down on your plastic bag use can make an enormous environmental difference. Think about this: The amount of oil in 14 plastic bags could power a regular car for one mile.

Switching out just half of your incandescent lightbulbs with CFLs: Can save nearly 2,300 balloons filled with carbon per year. 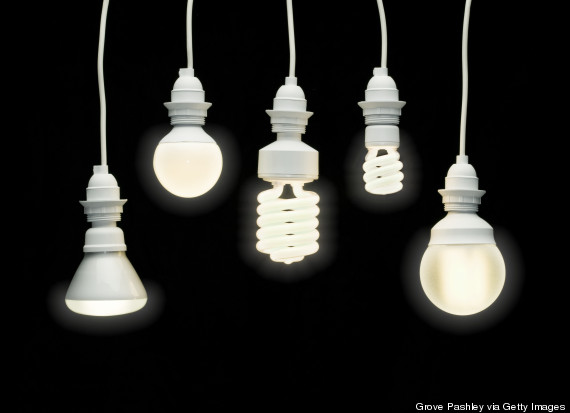 Artificial lighting is important. It allows us to see when no natural light is available, and it helps create the right mood for one's home. When you take the environment into consideration while selecting the right lighting, it can have a surprisingly huge impact.

While there are a number of different energy-saving lightbulbs, CFLs (or Compact Fluorescent Lightbulbs) are gaining popularity for their energy efficiency, long shelf life, and affordability. According to the Energy Star website, the average U.S. home has at least 40 places to put a lightbulb. If you switched out just half, or 20, of those incandescent lightbulbs with CFLs, you would be releasing 3,701 pounds of carbon emissions per year, as opposed to 6,000 from incandescents only. That could save you nearly three times the amount of greenhouse gas emissions.

Making your second car an electric vehicle: Saves the equivalent of 5,000 balloons filled with carbon per year. 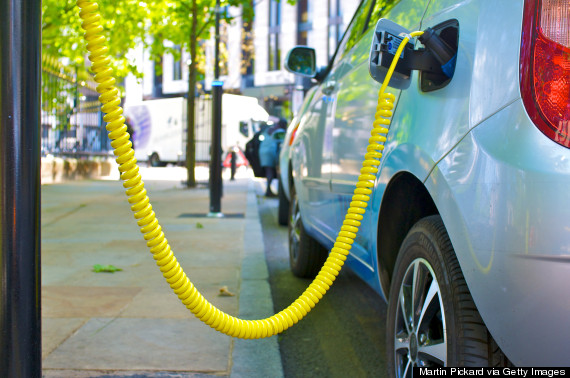 Believe it or not, electric vehicles are more than just a fad; they actually came about before gas powered cars and make a significant environmental difference. According to the alternative fuels data center, conventional gas cars release 13,043 pounds of carbon emissions annually, on average, while electric vehicles release 8,035 pounds. But if you're still concerned about the significant amount of energy used when driving an electric vehicle (even if your car is being powered by the worst of the worst), think of it this way: a 3 ton EV can be powered for a mile on the electricity used to power a toaster for only 20 minutes.

Installing rooftop solar panels: Can save more than 14,000 carbon-filled balloons per year. 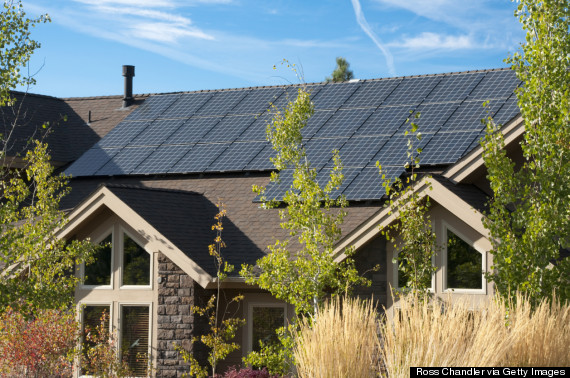 As many of us know, energy usage is not an all-or-nothing deal. In fact, most conventional energy distributors use a combination of different resources to provide you with energy. But what would happen if you installed solar panels on your roof, and only used conventional means to make up the difference? Even if you are only generating a fraction of your energy off-the-grid, you could be saving a considerable amount of carbon emissions. According to the Union of Concerned Scientists, solar power ranges from 0.08 to 0.2 pounds of carbon dioxide equivalent per kilowatt-hour. Traditional energy, like coal, can have life cycle emission rates of up to 3.6 pounds of CO2 equivalent per kilowatt-hour. Let's say you powered your home for 12 kilowatt-hours per day with solar energy instead of coal; you would be saving 14,892 pounds of carbon emissions every year!

So how much of a difference would you really make by implementing these changes? According to our calculations, the above adds up to more than 27,808 pounds of carbon emissions being saved every year. Next time you swap out a incandescent lightbulb for a fluorescent, use your own shopping bag, or opt to ride your bike instead of driving a car, remember that these small steps are bigger than they seem.