When you hear the word "lottery," what's the first thing that comes to mind?

A. People gambling who are very bad at math.B. Going to the store to buy a paper ticket only to lose it one hour later.C. A socially conscious fundraiser that goes a long way towards supporting state schools.

My guess is that you didn't choose "C."

Lotteries raise millions for state priorities such as schools and parks, but the traditional lottery system is old school, low tech, and needs a serious branding overhaul. 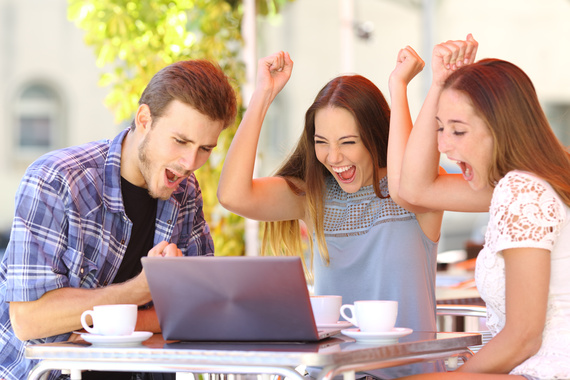 Lotteries and raffles are the oldest form of fundraising for social good. They were common in various forms in the 19th century, but by the early 20th century they became associated with poor communities and had been illegalized in this country. Not until 1964, when New Hampshire became the first state to start looking at lotteries as a way to raise state funds without raising taxes, were state constitutional amendments passed to usher in the modern state lottery throughout the United States.

Not much has changed since 1964 when it comes to playing the lottery. Nowadays, you buy print tickets at the corner 7-11 and then try not to lose or damage the flimsy things before the winner is announced. You have to personally check local news to get the results, and then manually cash in your winning tickets. You put together lottery pools at the office and then have to xerox all of the tickets and highlight the numbers by hand to create an ad-hoc spreadsheet. Hopefully, there's no confusion about who bought what so that if you win, you're not facing a lawsuit from your co-workers. The whole system is the furthest thing from efficient.

Perhaps that's why the lottery system in this country has more than $2 billion in unclaimed winnings.

Tech entrepreneur Matt Clemenson was pondering this inefficiency when he took his mom's car to be washed and discovered fistfuls of old lottery tickets spilling out of her glove compartment. Half were expired, the other half were well on their way. "Why isn't someone managing lottery tickets in a better way?" he wondered.

Clemenson turned to his business partner in creating apps, Tony DiMatteo. The resulting brainstorm -- and many meetings with lawyers and state lottery commissions -- led to AutoLotto, a new app that allows you to buy lottery tickets from your phone. (Full disclosure: I'm an investor because there's a community outreach angle that I found irresistible. Read on and you'll understand.)

AutoLotto is re-inventing the lottery, nudging it into the 21st century with a modern interface that gives the lottery a desperately needed digital makeover. Users add their credit card into the app and can then order tickets with no fees, recording all of the ticket information right in their phone. AutoLotto checks the tickets for winning numbers automatically and pays users 100% of their winnings. Think of it as a concierge service that buys lottery tickets on your behalf, or as DiMatteo puts it, "a very specialized PostMates."

Clemenson and DiMatteo are also smashing misconceptions about the idea of the lottery system itself. According to AutoLotto, six out of ten of us have played the lottery in the last 12 months, and most of those people have incomes between $45k and $75k. What's really surprising is that 70% of all lottery tickets are purchased by people with incomes of more than $75k.

"We think of the lottery player as the guy who likes Nascar and light beer," says Clemenson. "but the truth is that they're a lot more likely to prefer iPhones and overpriced coffee."

And the stereotype of the lottery gambling addict? Just plain wrong. Studies show that gambling addictions are virtually nonexistent with lotteries, partly because there's no instant gratification so you don't get any kind of "gambling high." To mature the industry, AutoLotto has built in triggers which block excessive gamblers from the system and refer them to help. In fact, AutoLotto is happy to provide open source code on their addiction analytics to any online gambling system that wants it. "The lottery is a system for good. There's no benefit to players or lotteries in letting people harm themselves through addictive behaviors; they just harm the space as a whole," Clemenson notes.

All of this is important for the investors behind AutoLotto who just invested $2.4M into the company to date since its founding in February 2015. The US lottery is a $80B per year market, and that number is up 10 percent year over year. Capturing this market and building on it is an exciting opportunity for everyone involved in AutoLotto. Especially true when you consider 30 to 40 percent of that money goes to local state budgets, usually education.

But Clemenson and DiMatteo see more than the pure dollar value in the lottery; they also envision the ways it can expand upon its ability to bring people together for the collective good. That's why AutoLotto is creating lottery pools that will automatically distribute a percentage of the winnings to a nonprofit chosen by the users, aided by Causecast's online giving platform. For example, the 49ers, an AutoLotto investor, might encourage every 49er fan to purchase a lottery ticket that helps raise money for breast cancer research, with 5 or 10 percent coming off of the top of the winnings. Suddenly, you can create giant pools that go far beyond an office pool, all for a good cause.

Since announcing the upcoming launch, AutoLotto has acquired a list of nearly 150,000 users waiting to download the app. The app will be available for both iOS and Android at launch, and social pools to benefit causes will be available in Q1 of 2016.

"The lottery is a fundamentally charitable system, which funds education for millions. We want to create ways our users can additionally support whatever cause they are passionate about," says DiMatteo. "AutoLotto modernizes the lottery while ramping up its massive potential to unite people together for common good.