I was having dinner with my friend and gifted writer Anna Varshavsky in New York and our conversations ran the normal gamut for two people who meet infrequently and enjoy catching up: We talked about sex; politics; the politics of sex; teenagers; the battery life of cellphones; and tasteful side-boob. Pretty much the usual. And one thing we realized we had in common was that we both blame President Obama for giving us diarrhea. Stick with me here as we travel this meandering path. It might be helpful if you get a couple glasses of wine into you since it definitely helped us.

In 2008-2009 when President Obama began his first term, the U.S. economy was in really bad shape and today, as he gets ready to end his second term, it is in better shape. Try not to foam at the mouth over this (watered down) statement of support. I feel justified in giving President Obama the credit for this since President Reagan widely gets credit for the economic boom in the 80's, so I might be shallow, but it's in a non-partisan sort of way. Yes, I know that this isn't a universal truth and that not everyone will benefit from any improvement of any kind. But below are some actual charts - made by economists - to back up my claim that the U.S. economy looks better than it did during 2008-2009.

US National Unemployment Rate by Year 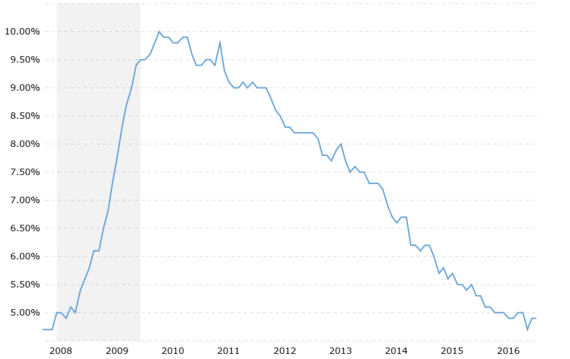 In-depth analysis of the chart, by me, who majored in languages (don't blame the credited source for this): The line starts really low as we enter 2008 because people had jobs. Then there is a crash in 2008 and 2009 attributed to many factors causing the banking industry to have a total meltdown and a lot of people lost their jobs. So the line went wayyyyy higher, showing high levels of unemployment. Later on in 2011, the line started coming down again as people got jobs, probably because companies were doing better and could hire people again. 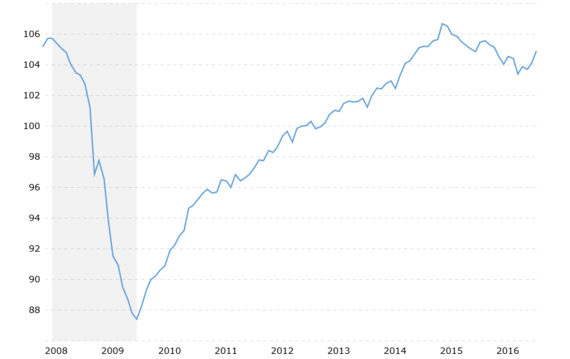 In-depth analysis of the chart, by me, who majored in languages (don't blame the credited source for this): In this case, the line starts high in 2008 because companies in the US were making a lot of things. Then, in 2008 and 2009, they couldn't make as much stuff, maybe because people didn't have as many jobs and weren't buying that much stuff? So the line, in this chart, goes a lot lower about the same time as the line in the chart above went higher. Starting in 2010, it went up again as companies made stuff again and people could buy stuff, maybe because more of them had jobs.

Thusly, as the charts and my amazing analyses illustrate, the US seems to be doing better and Anna and I realized that we, too, were doing better financially than we had been. Because of our financial situation, we were both more likely to go to Costco. Anna calls it Sam's Club and because I am theoretically OK with people having different views than me, I try not to judge her. When in Sam's Club/Costco, we are both now much more likely to get caught up in the "American Dream" and buy really large things that we don't really need (and have nowhere to store,) in addition to the 50 rolls of toilet paper that we do need. Here are some of the amazing items I have picked up over the past few years because they were "a good deal:"

Anna revealed that she has also ended up coming home with a smoked salmon, which is doubly amusing in that neither one of us likes smoked salmon. Smoked salmon gives both of us diarrhea.

Back in 2008, you wouldn't catch me buying smoked salmon at Costco. In 2008, the job market for high-tech strategy and marketing consultants was less-than-robust and my family was rediscovering the beauty of ramen noodles as a main dish. We were prioritizing such luxuries as "paying for housing" and obtaining "catastrophic coverage health insurance." Every outlay of money was evaluated for short-term and long-term usefulness. Our daughter's school suffered as those requested yearly donations to support a quality, public school education became slimmer.

Fast forward to 2016, and things are more comfortable. Personally, the job market has improved for my family as the technology sector in California rebounds. For Anna, the market for Viking Queens has been pretty steady all along, but her role as a Creative Monkey/Designer has also stabilized. If you need more data than just the opinion of a HuffPo blogger and her creative, Viking friend, Marketwatch published a nicely optimistic article in July 2016 titled "Here's why the U.S. economy is better than you think." The article highlights gains in many sectors including jobs, commercial real estate, housing, auto sales, travel, and consumer confidence. It states "Of course, some statistics may not be rosy right now, but when you look at the big picture, it's tough to say that the U.S. economy isn't vibrant." Most importantly, they see improvements for middle income Americans.

This recovering economic picture has resulted in unexpected and disturbing consequences for me, like buying a giant smoked salmon. I seem to be a living, breathing example of why a robust middle class will improve the economy through the purchasing power of "the many" versus "the few." Happily, though, because I can now tie my acquisition of diarrhea-inducing foodstuffs to an improving US financial outlook, I can also shift the blame to President Obama. Perhaps it's even time to get a new set of plastic containers! Thanks, Obama.