But how safe is the U.S., really? While the U.S. remains safer for LGBTQ people than many other countries around the world, is this enough? Is this the correct standard - to simply be the lesser evil?

On June 12, 2016, twelve days into National LGBT Pride Month, a gunman slaughtered 50 people at a gay nightclub in Orlando in the deadliest mass shooting in U.S. history. This horrific hate crime is a clear indicator that there is so much more work that needs to be done for LGBTQ rights in the U.S.

The gunman's father reportedly informed NBC News that the incident was sparked by the gunman witnessing two men kissing:

As a member of the LGBTQ community, I cannot help but feel personally enraged by the killer's ignorant comments. Even in 2016, post-marriage equality, it is crucial to recognize that intolerance is still very much alive and well in the U.S. Why was the gunman so offended when he witnessed a kiss between two consenting adults? Because to be clear, that is what he witnessed. Not an abomination or a sin or an injustice. An innocent kiss between two consenting adults who happened to both identify as male.

The Orlando massacre is a painful reminder of the mindless hate and violence that continues to surface against the LGBTQ community in the U.S. Such acts rob all LGBTQ Americans of their feelings of safety and acceptance. It jeopardizes our basic human right to walk down the street unharmed.

As I think about the Orlando massacre in the context of AsylumConnect and LGBTQ asylum seekers in the U.S., it begins to take on an even greater significance. It is deeply disturbing that persecuted LGBTQ people are forced to leave everything behind to seek asylum in a country that still witnesses such tremendous acts of hatred. The harsh reality is that we are currently living in a world which continues to ask LGBTQ people to settle for the imperfect safety offered in the U.S. On the contrary, we should be living in a world where LGBTQ people do not have to choose between bad or worse. We should be living in a world where it is actually safe for two men to kiss or hold hands in public. Everyone is entitled to be themselves.

If the U.S. is actually one of the best places to identify as LGBTQ, then it seems there is still no truly safe place in this world to be queer. If this sobering truth doesn't warrant pride and activism, I'm not sure what does.

After witnessing the deadliest mass shooting in U.S. history, it is time for every one of us, regardless of political affiliation, to finally recognize that no one's right to bear arms is more important than another's right to life. It is time for us all to concede that someone's sexual orientation or gender identity does not cheapen their value as a fellow human being. And to all of those who continue to breed hate and remain steadfast in their decision to try to take away our rights and strip us of our humanity, please listen close: no amount of senseless gunfire will prevent that rainbow flag from waving. While your bullets may take our breath away, they will never change us.

Stop the violence. Stop the hate. 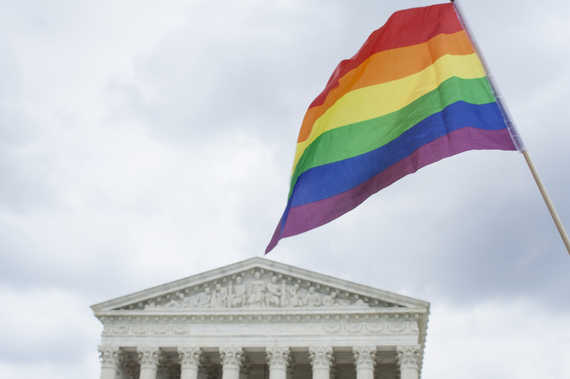 Click here for more information on how to help Orlando shooting victims and their loved ones.