Whenever the conversation turns to cloud storage, subscription based pricing for software, or any form of digital distribution, I find myself remembering what life was like in the '80s. Specifically, I recall how I programmed my first computer game. It was saved on an audio cassette tape.

Yes, in the early 1980s audio cassettes were a legitimate storage medium for software. The cassette tape, which was once used for both audio and data, is now used for neither. On the audio front, tapes lost the format wars to CDs... which are now losing the battle against purely digital distribution in the form of both sales (see iTunes) and streaming services (see Spotify.) As for data storage, the cassette never stood a chance against the 5 ¼-inch floppy disk... which was eventually replaced by the 3 ½-inch floppy, the Zip disc, CDs, USB flash drives, and cloud storage.

The storage formats aren't the only things that have changed. For both media and software, the entire concept of ownership has been disrupted.

Nevertheless, I would like to defend records for what they represent in terms of the relationship between content providers and consumers. Consider, for example, how my father accesses his media library. Sometime back in the mid 1950s, my dad acquired a great LP called Concert by the Sea by jazz pianist Erroll Garner. That was almost 60 years ago, but my father still owns it and it still sounds great. (For younger readers who want to know what a "record" looks like, I forced my dad to pose for this picture.) 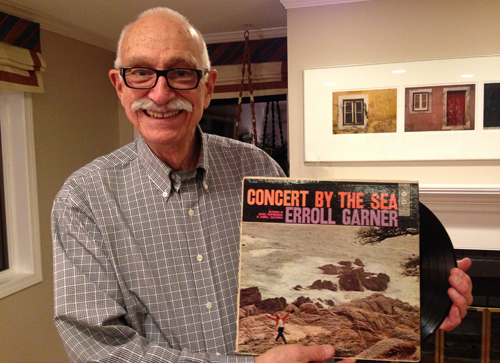 Compare my dad's record collection to the way I consume media.

My Dad: As the owner of the LP, my father is in complete control over when he can listen to it.

Me: As somebody who sometimes streams digital content, I am opting into a service model where I surrender some degree of control.

For example, the rights to Concert by the Sea changed hands when Sony took control of Columbia Records... but none of that disrupted my dad's ability to play the album. In contrast to that, even though you might pay a monthly subscription fee to stream movies on Netflix, your access is at their discretion. When Netflix doesn't secure a favorable agreement with movie studios, content that was in your queue vanishes from their service.

Another issue to consider: If my dad didn't enjoy the record as much as he does, he could have resold it to another owner at a tag sale years ago. The right to resale is under fire as producers work to shutter second-hand markets. These efforts limit the rights of consumers and, in some cases, backfire in the face of the content producers. Microsoft, for example, was originally going to prevent the Xbox One from playing used games until fan backlash forced them to reverse their decision.

While the software as a service model decidedly has its benefits, developers and content creators shouldn't be so quick to turn their back on the concept of ownership and the value that ownership offers to consumers.

By the way, if you like jazz I definitely recommend that you listen to Concert by the Sea... perhaps on iTunes or Spotify.