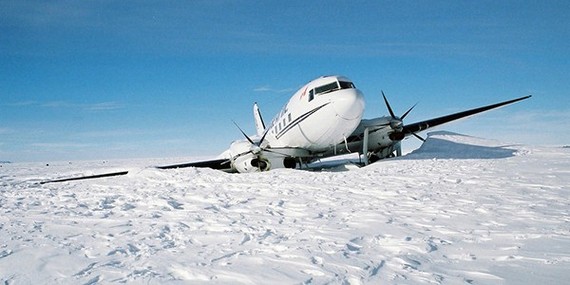 Unfortunately, Arctic dogsledding is not an option for most travelers this week. Here's what to do if Winter Storm Juno has you trapped under her cold, icy thumb.

For anyone traveling in and out of the Northeast area this week, it's going to be a doozy. In fact, if you're going to be traveling at all, most travelers will probably feel the effects for a few days, even once the snowstorm blows over. With over 7,300 flights canceled thus far, it's important to go in with a battle plan in place, even if that means just finding a place to wait it out.

Remember, it's the Domino effect: Canceled flights mean other flights relying on that plane will have to find new ways to move passengers. Just because you're flying from IAH to LAX doesn't mean your flight won't be affected at all. In fact, it most certainly it will if that plane you were supposed to be on was coming from JFK and that flight is now canceled... oh, whoops.

Stay on the ball.

Make sure you know what's going on before you head for the airport. Travelers in the most affected regions should take into consideration any travel bans that may be in effect for their city or state. FlightAware has a running list of the most affected airports. They also have one of the best flight status checkers I've ever seen, with detailed information and statistical averages on delays and cancellations.

Thankfully most airlines are waiving change fees for affected passengers. If you're on your outbound trip, there's not much you can do except weather out the storm. But if you're just starting your trip and end up missing the whole point of the trip -- "Explaining What "Trip In Vain" Means" making the trip made in vain--the airline can help out. It's a bit of an unusual policy that's not widely known and publicized but let the airline know. More often that not, they can either issue some type of credit or another form of compensation. Worst case scenario, reschedule the trip entirely for another time.

Flights affected the most are most likely flights at the major hubs. If you have to change your flight--and chances are you will--avoid routing it through places like Houston for United, Dallas/Fort Worth for American, Denver for Frontier, etc. because the majority of those flights could be delayed. Even if you're traveling from an "unaffected" hub to another "unaffected" hub, don't be surprised to see repercussions. If anything, try routing the new flight through an atypical hub or small city. These are likely to see less traffic and are hopefully less affected.

Pick your connection city with care. There's a travel mantra about connecting in a city where you don't mind being stuck: I'd take this to heart in scenarios like this.

Find your own flights.

Instead of relying on a gate agent or an airline representative for help, I would turn to the paid version of WorldMate ($10/year) or TripIt ($49/year). These mobile apps offer the ability to look up alternate flight schedules between two cities for a particular date. You'll have every flight number and departure time at your fingertips, which is absolutely invaluable. That way, when you finally do get to someone, you're informed and can let them know exactly what flight you want to take. One bonus? They keep track of real-time flight delays and cancellations, something that's crucial in the upcoming hours.

Patience is an art and this is nowhere more apparent than when you're stuck. The last thing you should do is attack your airline rep because, really, there is nothing they can do about it. In fact, I'm sure if it was up to them, you'd be on the road so you'd be out of their hair. Remember, everyone is doing their best to accommodate you. That cliché about catching more flies with honey than with vinegar? True and true.

So what to do? It might actually be a lot faster to call the phones or go to the airport lounge (if you have access). Even if that looks like you'll be hanging out for 45 minutes on the phone, it's still a lot better than waiting in line for two hours while gate agents try to accommodate passengers from 20 canceled flights. Trust me when I say it's better to go home and fix this over the phone than trying to do it at the airport.

Use your travel insurance.

This is one of those situations that travel insurance comes into really handy. If you were smart enough to place it on a "The Best Credit and Debit Cards for Traveling" travel-friendly credit card, this is the time to double check that policy. Chances are, if you're being stranded overnight somewhere, you may have some leeway to finally at least be stranded in comfort.

For last-minute accommodation that doesn't involve sleeping in the airport, try resources like Case Studies: HotelTonight Is for Last-Minute Splurges" HotelTonight and Airbnb for a quick stay. Though the response of Airbnb hosts can vary, personal experience has shown me that the majority of hosts are fairly responsive and it's possible to book something for the very last-minute. Hopefully, though, the airline can come through with a place to stay.

As for me? I'm hunkering down in the apartment even though my flight is scheduled for this week, out of all weeks. Trust me, I'm really all in it with you guys.