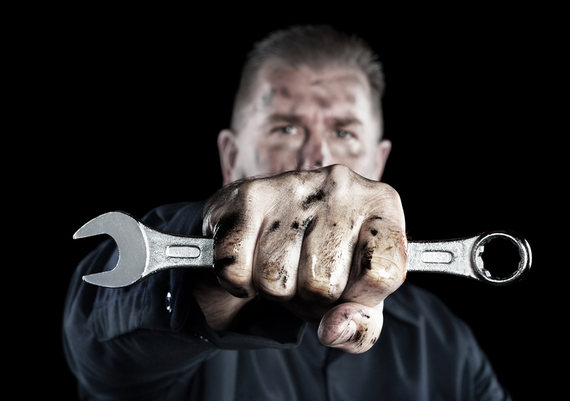 I am not a handyman. Not even close. And while, indeed, I am a man -- indeed, considered by many to be a good man -- I am not even remotely close to being a handyman. Yes, I know the difference between a Phillips head screwdriver and a flat head screwdriver. And yes, I have wielded a hammer from time to time without breaking my thumb, but constructing a "bathroom shelving system" has never been my forte -- especially a do-it-yourself aluminum bathroom shelving system bought, on sale, in a Mexican hardware store.

It looked so easy when I bought it. And it probably was. But when I opened the box and noticed that the 16-page instruction booklet was, solamente, in Spanish, I knew I was in trouble.

Removing the parts from the box, I laid them out on the dining room table and started counting. Excelente! Fantastico! Mucho coolio! Everything was there just as promised! Nothing was missing! And though I must admit I felt like taking a break to celebrate the fact that I had: 1) Successfully opened the box; 2) Placed all of the parts on the dining room table; 3) Counted the parts and; 4) Confirmed the fact that all of the parts that were supposed to be there actually were, I decided to press on.

It didn't take me long to realize that the 16-page instruction booklet had been written by a dyslexic psychopath with very little appreciation of the fact that I had grown up, Jewish, in the suburbs of New York City. Of the 63 words in Paragraph No. 1, I recognized only seven. That is approximately 11 percent -- excellent, perhaps, for a mutual fund yield, but not so excellent for putting together an aluminum bathroom shelving system before hell freezes over.

"Screw the booklet." I thought to myself. "I don't need no stinking instruction book." I was smart. I was resilient. And I was my own person. And besides, wasn't a picture worth a thousand words? Of course it was! And there, it just so happened, was a picture on every single page! Well, not exactly a picture, but a diagram ... or something sorta kinda resembling a diagram. Whatever. Hey, how hard could this be?

So I inserted tube "A" into Tube "B", delayed my celebrational visit to the refrigerator, and inserted Tube "C" into Tube "D".

And while it is absolutely true that the journey of a thousand aluminum tube insertions begins with a single fitting, it soon became apparent that I, newly intoxicated by my recent take-out-all-of-the-parts-from-the-box success, was being taken in -- not unlike the way inner city crack dealers give their customers the first taste for free. Clearly, I needed help. And I needed it fast. So I doubled down and returned to the only resource available to me -- the 16-page instruction booklet written by the aforementioned nihilistic whack job.

The first line made no sense. Zero. Nada. Zilch. And though I did understand the Spanish word for "interior" ("interior"), I did not recognize any of the other words. Like "coloque", for instance, no matter how many times I pronounced it. Might it be the south-of the-border word for "croquet"? Highly doubtful. What about "cologne"? Might coloque have something to do with a Mexican fragrance ? Highly doubtful, again. But wait! Hold on! Just three days before, I had downloaded "I Translate" onto my iphone! All I had to do was type the word and click.

Theoretically, this made perfect sense -- or as some of us like to say "senso perfecto" -- except for the fact that the newly installed wi-fi in my house, while it worked just fine on the second and third floors was, shall we say, mucho glitchy on the first.

Not to be deterred, I mounted the staircase, found the signal half way up, and typed in "coloque". Bingo! It meant "place". Whoa! I get it! I'm supposed to place something... somewhere... somehow... which, although, I already intuitively knew, was actually quite empowering to know again. I was now on my way to having my own system for putting together my soon-to-be-installed-in-the-bathroom aluminum shelving system. How cool was that! And the only thing I needed to do was walk half way up the stairs every time I wanted to translate a word which, by my calculations, was going to require about 500 trips -- not an especially efficient game plan, me being 68 and wanting my aluminum bathroom shelving system installed before Donald Trump built his fucking wall.

That's when it dawned on me. Badabing, badaboom. Like a bolt from the blue. Like Buddha under the Bodhi tree. Like a father understanding that not only will he never get his teenage daughter to clean up her room, it didn't matter in the least. I DID NOT HAVE TO DO THIS! I did not have to assemble the do-it-yourself aluminum bathroom shelving system on a Thursday afternoon. Somebody else could do it -- somebody way more qualified than me. Somebody who could actually read Spanish. Somebody who wanted to do it. It didn't have to be me. NOTHING was at stake. Nothing at all. Not my manhood. Not my wife's opinion of me. Not even my own opinion of myself. Yes, of course, Jesus, being an enlightened carpenter, could have probably figured it out in a flash -- but could he have set up his own Instagram account? Could he have launched his own Facebook group? I doubt it. 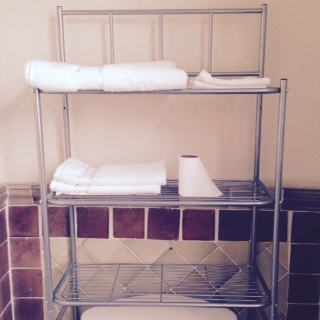 Mitch Ditkoff is a poet, storyteller, and President of Idea Champions, an innovation consulting and training company based in Woodstock, NY. The above story is not included in his new book, but 38 others are.