Last week, one of my students dismissed marriage - the idea of marriage, the institution of marriage, my marriage - with a shrug and a few thoughtless words. He asked where I'd been the day prior and I responded, "With my husband at MD Anderson." He said, "Your husband? The same one you were with before ("before" being last year)? You're still with him?" I told him we'd only been married three years and of course we were still together. His response was, "It's 2016, so you never know." Just like that. So nonchalant.

It's 2016 and suddenly marriage doesn't matter. It's irrelevant. It's outdated. It doesn't work. Everyone knows it. Even kids know it.

Well, it's not really working out, so let's just call it a day.

I think I'm interested in someone else, so I'm going to try that out instead.

I'm unhappy with something and I don't know what it is, so I'll say it's you and end things.

Class continued, but The Great Gatsby spurred questions of marriage and relationships, fidelity and trust. One girl asked me whether I'd stay with my husband if he cheated on me. I thought for a long time, stumbling over my answer, before settling on the simple, but honest:

The girls asked what I meant while one boy mumbled that I should have more respect for myself than that. I explained to them that marriage is complicated, that it's not easy, that while we vowed to love each other, we still have to choose each other every single day. Because getting married is easy. It's deciding to stay married to each other that's hard.

"But if he cheats, he doesn't love you!" They insisted.

I hesitated, weighing my words carefully, wanting them to be meaningful, considering how I might feel if my husband ever were to cheat on me.

I chose him. And he chose me.

I talked about mistakes and how we're fallible because we're human. Hadn't they, after all, been placed with me because they'd made mistakes? They nodded, thoughtful. We resumed class, but the idea of choice, of choosing to stay married to my husband, stuck with me.

A few days later, my sisters came to visit. One of them is getting married in a few weeks and part of the assignment their pre-marital counselor gave them was to ask married couples what their biggest struggle was and how they overcame it. Nearly every married couple said the same thing: choosing love, choosing to fight for love, choosing to fight for each other - that was the biggest struggle, but it was also how they overcame.

We're fooled into believing that marriage and happiness are the same thing, but sometimes marriage isn't happy. Sometimes marriage is hard and horrible and scary and weird, but we get past that because we made a choice to love each other even when it's hard. 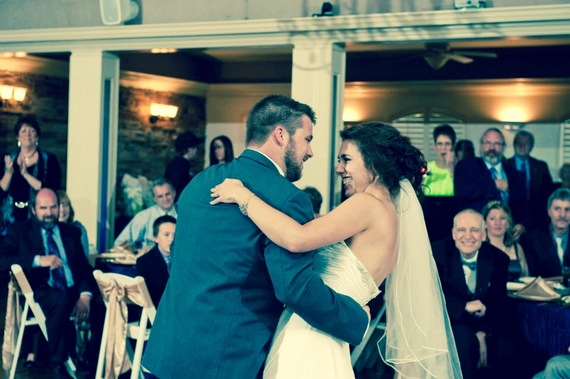 This piece was originally published on michbelleunderwood.com.