Broadcaster Julie Chen recently admitted she got eyelid surgery when she was 25, after a news director told her she wouldn't get ahead without it. An agent reaffirmed that belief.

I had blepharoplasty, too, but before I entered the broadcast industry. It was like a graduation gift, one my parents supported financially and otherwise.

The size of my eyes did not significantly change. After all, the goal was to make the shift look natural. But gone was the heavily-hooded look at the hands of a plastic surgeon in Korea's famous district of Apgujeong, where today, many across Asia still travel for a variety of procedures. My doctor remarked he removed a good bit of fat that had made it harder for me to literally open my eyes -- so much so I had been lifting my chin for the past 18 years.

But like Chen, I wonder: Had I not gone under the knife, would I be where I am today? 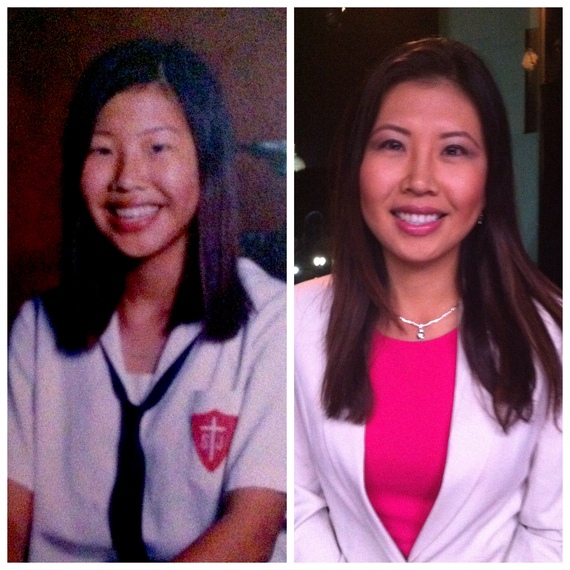 Hard to say. I never thought about being an on-air reporter until an Asian-American mentor encouraged me during college. I grew up on the island of Guam as a 1.5 generation immigrant -- sometimes seeing a clash of American vs. East Asian values, balancing individualism and conformism, speaking up and going with the flow. Family members were typically critical about my weight, and some would playfully tease me about how dark I was. But like any teen reading magazines and watching TV shows, I also faced insecurities. After getting the crease and growing my sense of self, I remember almost instantly feeling free to play around with makeup and beaming more confidence.

This doesn't mean I hate my culture; it's more that I am a product of the societal pressures it placed on my generation. Call it cosmetic (and not plastic) surgery and perhaps it sounds less complicated. Don't we dye our hair, wear heels or do other things to enhance our appearance everyday?

I have been honest with my closest circle about my experience -- and it doesn't matter to them, I'm the same person. Some of my childhood friends decidedly did not follow my path, and I think they look great. And according to the American Society of Plastic Surgeons, Asian-Americans account for 6.4% of all eyelid surgery procedures performed in the U.S. in 2012, only slightly up from recent years. Maybe I'm contradicting myself, but it's more important to celebrate the person that shines from underneath the surface.

It's nice to know the Dayton, Ohio station where Chen worked has since apologized for the remark of a predecessor. I would like to think that kind of conversation with racial undertones under the veil of political correctness would not happen today. There needs to be more progress on this front, but I do see increased diversity on television overall, including Asian, female colleagues of all sizes and with varying eye shapes.

Then there's ageism and sexism. Racial attitudes aside, I have heard horror stories about some on-air personalities being told to get breast enhancement surgery in the last decade. On the other hand, a general manager I know recently remarked positively that the community wants to see a reflection of themselves on the screen. What's comforting is that this generation is already seeing a different showcase of presenters and entertainers. Census data shows that the U.S. population will be made up of mostly 'minorities' by 2050 and we just claimed a South Asian for the first time as Miss America. Nina Davuleri does not necessarily condone plastic surgery, but adds to the idea of to each woman, her own.

I appreciate Ms. Chen sharing her story, in part because it sheds light on the struggles minorities face(d). She has paved the way for some of us, even serving as a role model.

I could have waited to see if a line would have developed as the baby fat left my face, but I am who I am now. I love my dark, almond eyes as part of my overall ethnic look and the unique perspective I bring to the table.

We are entitled to our opinions, but we can also be empowered by our choices. We live and learn by them -- we don't always have to hide behind the experiences that make us unique.