I'm one of those women who loathes hair removal. I don't know if there are many of us out there, but I suspect there are. Since the first day when, as a teenager, I decided to get rid of the hair on my legs and armpits, I have spent my waking hours in hair removal torture. It's a waste of time that caused me suffering. Nonsense, really. But I didn't question it, either. At the end of the day, I'm a woman, and we have to get rid of our body hair, right?

Did I have another option? For a long time, I felt I didn't, so I merely tried to fully minimize my periods of suffering. I chose not to shave in the winter. After all, I was covered up, and nobody was looking at me... That's when I began to realize I was shaving unnecessarily, and only doing so because it was expected of me as a woman. I enjoyed my hairy legs in winter, yet coninuted to submit to near-weekly shaving torture in summer.

Yes, I am a hairy woman. I have very white skin and very black hair. My legs and armpits are veritable jungles. I know there are smooth-skinned women who shave very rarely and have fine, blonde body hair. But that's not the case with me, so trying to camouflage and pretend that hair is not there doesn't work for me. Besides, I live in Málaga, the weather is warm most of the year and the beach is there for enjoying... 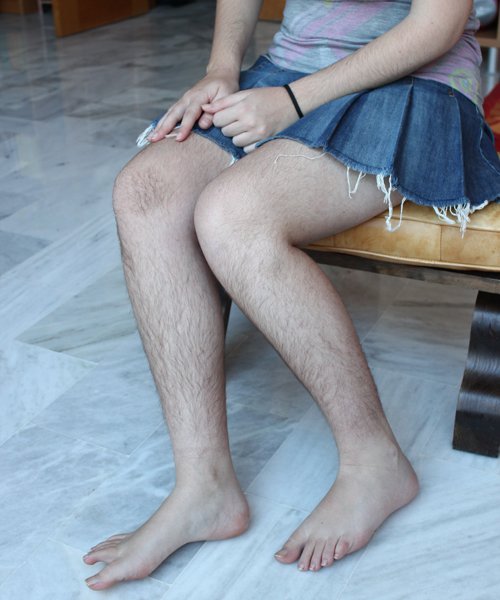 After three months without shaving, enjoying my dark jungles, time began to tick. The sun is out. It's hot. Summer is coming. Noooooooo! I had to start wearing short skirts and tank tops. And with the change in season comes my internal struggle between my needs and wants and the needs and wants of the society in which I live. This year, I'm seriously debating it: Should I shave or not?

I'm very conscious of what I want, that if it were up to me, I wouldn't do it. But is it really up to me? Logically, I can do what I want with my body, but I don't want to turn going out for a stroll into a quarrel, and don't want to decline plans because I feel like I need to hide. Because yes, I'll admit it: I'm not ready to listen to the criticism or endure the stares. I'm not a revolutionary. Yet.

How have we arrived at this situation? I'm amazed that we've reached the point where a woman who doesn't get rid of her body hair, hair that grows naturally, is a rare specimen. I'm not judging the millions of women who wax because they want to (although we'd have to dig deep to know why they want to), but I am critical of the point we've reached where there's no choice about whether or not we remove our body hair. It's a given, period.

I've been reading articles online in which women defend their right not to remove their pubic hair. We're seeing, little by little, how bikini waxing is becoming a matter of course. I won't go there, that's it, but I suppose in a few years, it will become the norm. I'm reading out there that young men demand it, that they want women with no hair on their sex. Well then, I don't care what those boys demand. I'm not interested in them.

Yet, after a rather extensive online search (both in English and Spanish), I've not found many reference articles on the non-removal of leg and armpit hair. I read a multitude of articles about Emer O'Toole, an Irish journalist that went without shaving for 18 months. You can watch a video where you see her unshaved legs and armpits. These are some other posts I found on the topic:

Reasons why I don't shave

There are also Facebook groups in which women show off their unshaved armpits, such as this one in English and this one in Swedish. And some time ago, I heard mention of a documentary, Pitstache, about this theme, which I think is currently in production.

But not shaving is still a taboo. A topic one does not talk about. One that people do not want to talk about. That's why I decided to write this article, because I think we have to bring it up and talk about it. Women need to know they have options without seeming like revolutionaries. Women need to know that we have the choice, that hair removal is not an obligation that comes along as part of being a woman. Teenage girls, when they start to grow hair, need to know that they can choose, that they decide if they want to shave or not. That both options are valid. Today, that's not the case. It had been nearly impossible for me to find photos of women with unshaven legs (unshaven armpits are easier) and so I post mine, so hairy, feminine legs can come to light, can be seen. 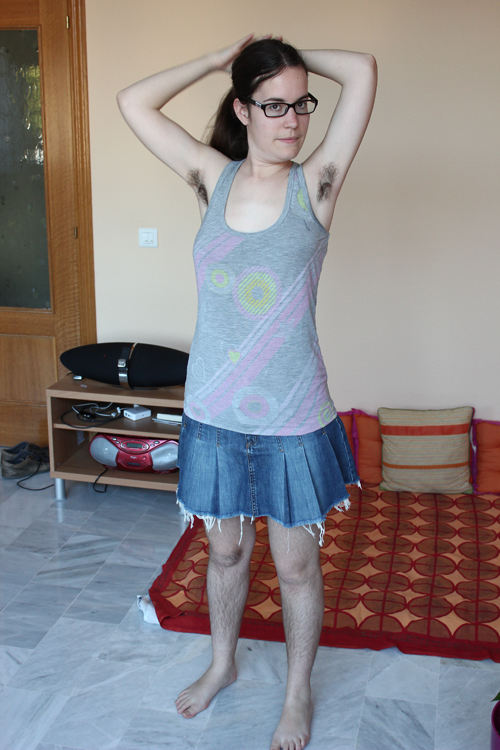 When I asked my boyfriend to shoot these pictures, he refused. I think he didn't want my hairy legs to be made public. He had enough with having to endure the plan (ha!). We had an interesting conversation and a few seconds later, he admitted he was wrong and agreed to take the pictures. He told me the pictures were an assault against aesthetics. I agree. They're an assault against an aesthetic, against an image of female beauty that we have ingrained in our culture and in our society. That same image I want to change, simply because it's not real. Women have hair on their legs. We have hair on our armpits. And on our pubis. And in a thousand other places. We're hairy, the same as men. And that's real. A reality that women, pressured by one another, insist on hiding.

I still don't know if this year I will succumb to the pressure, if I will shave again. I've not decided yet, but I'm very conscious that if I finally do it, it will be for others, and that drives me apart from my true self.

This post was translated from Spanish and originally appeared on HuffPost Spain.