When to Jump, an independent media partner of The Huffington Post, is a curated community featuring the ideas and stories of people who have made the decision to leave something comfortable and chase a passion.

I came to New York City straight from college, eager to become someone new. A career in fashion consulting seemed so glitzy then; everyday, I pored over clothes, makeup, parties. I thought once I perfected each part, I would finally have the glamorous life I so desperately wanted.

A year later, my life was perfect -- at least, according to Facebook. I was on track to a promotion and raise at work, owned expensive clothes I couldn't afford, and had just been accepted early-decision as one of the youngest candidates to Columbia Business School. I may have feigned smug satisfaction, but inside I was miserable. I was too embarrassed to admit I wasn't the person I aspired to be and terrified what a change would mean for my façade as a self-important fashionista. But on my 21st birthday, I decided it was now or never. The decision itself wasn't completely courageous: I had my admissions letter as a safety net and I was deliriously confident I'd be returning to a well-salaried path post-MBA. Why not take the next year to enjoy culinary school as a "creative sabbatical"? What else did I have to look forward to after that besides decades of PowerPoints and corporate politicking? I threw caution to the winds; I breezed through my school tour and put my entire savings down as a deposit. Maybe I can't choose my future, I thought, but I would take this year as my own.

I definitely did not anticipate culinary school completely changing my life.

My life was perfect -- at least, according to Facebook.

School was...an adjustment. Most of my classmates were older, career-switchers with backgrounds far different from mine. My struggle to relate to them, however, paled in comparison to my difficulty working with them. I was historically a terrible team player and avid micro-manager. Yet instead of ostracizing me, my classmates accepted my shortcomings and supported me regardless. When I leered over my peers assigned to cooking sweetbreads or slicing chives to make sure "everything was okay", they indulged me with a laugh and gently shooed away my concerns. When I broke a bottle of expensive oil or burned our mandonlined apples, my classmates hurried over to help without hesitation or finger pointing. It eventually dawned on me...my classmates cared about me. Not my resume, not my lambskin handbags, not my impressive ability to use "vis a vis" in regular conversation - just me.

This type of friendship was completely foreign to me. I began to appreciate characteristics of my classmates I never even noticed or considered before. Cliché words like generosity, loyalty, and open-mindedness took on new meaning. And just as I began to realize what qualities were actually important in others, I began to see new possibilities for my own future. There was another option besides the narrow definition of success I'd followed for years. Perhaps it was not as well defined or as well regarded by society at large, but my transitional time in culinary school helped me I realize personal happiness does not come from external approval - but from internal courage. 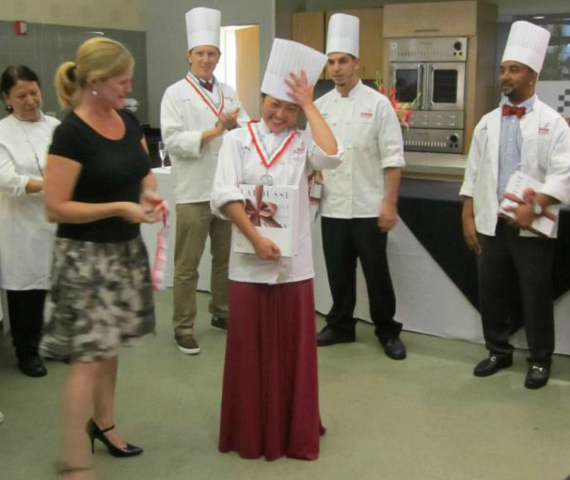 I left Columbia after one semester to start my journey in food. It was one of the hardest things I've ever done. For years I could hear the voices of my peers, former coworkers and fake friends in my sleep, whispering, "Here I thought she was going to be someone important." What I thought would be a triumphant charge against the status quo turned into a deeply humbling realization I was starting over. It was an uphill battle to find the right type of job - I felt I fit in nowhere. I resolved to forget the titles, the pay, the hours and focus on learning. I was a barista, a sales consultant, a recipe tester, a kitchen cook, a social media intern, among others. I explored facets of the industry I didn't realize even existed. My last salaried role was at Le Pain Quotidien, where I was involved with the entire menu development process, from R&D to launch, across multiple countries. From there, I've had my food published in magazines like Harper's Bazaar and landed appearances on Food Network and Oxygen Network; I also started my own LLC - a culinary consulting practice. In two short years I've brought in enough clients - many of whom are repeats - and have enough referral traffic my work can comfortably sustain my lifestyle. I could never have done any of this without first going on my bizarre path of odd jobs and manual labor.

My yearning for culinary creativity also prompted me to start my own underground restaurant, I Forgot It's Wednesday. My idea was to host a group of like-minded individuals around good food & drink and enable them to connect on a deeper level. I was terrified the concept would flop and no one would come; for a while no one did. Filling a mere 12 seats each dinner took all the humility and perseverance I had learned on this journey, if not more. But for all the "no's" I heard from the press and nonchalant disregard from the many I prospected, there were gems: loyal guests who became champions of the brand. Once again, I found my real friends, the ones who cared about my small business before 7x7 named it the #1 Supperclub in SF or Business Insider mentioned it in their Top 10 list. Those are the people that made all those nights washing dishes at 2am worthwhile. I Forgot It's Wednesday has grown into a part of my personal narrative, and in the most trying of ways it has shown me failure is simply the beginnings of success. 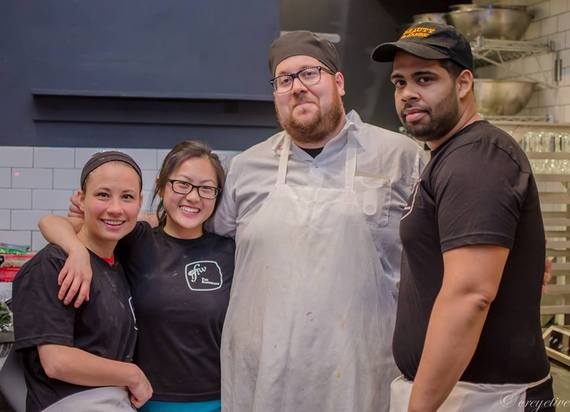 My culinary school classmates cooked alongside me at the 1st IFIW popup! Photo by BK Narayanan.

Culinary school changed my perspective on what fulfillment and happiness really means and opened my mind to possibilities I never dreamed possible. But I still have so much to learn and many more ways I can fail, rise, and start over again. My sincerest wish is a desire to grow next year, and every year after, as earnestly as I have the last four.