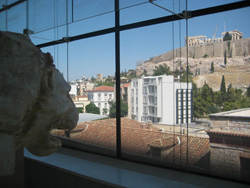 This weekend Athens is filled with dignitaries in town for the opening of the New Acropolis Museum, a state-of-the-art glass and steel structure at the foot of the Acropolis hill. Practically anyone in the hemisphere who ever rated a bodyguard has come to bask in the sleek, climate-controlled air of the new museum, built to replace the tiny "museum on a hill" at the top of the Acropolis, over 33 years and at a cost of 130,000,000 Euros. Prime Minister Erdogan of Turkey was scheduled to stop by Athens' historic Grande Bretagne hotel to freshen up before tonight's official opening. I know this because I overheard some staff members grumbling that they were asked to remove any artworks that had images of the Greek War of Independence, in case the birth of the modern Greek state in 1822, or perhaps the memory of almost 500 years of Ottoman occupation, offended the PM on behalf of his imperialist ancestors.

In the end, Erdogan couldn't make it due to illness, thus sidestepping any diplomatic or interior decorating crises for the Grande Bretagne. But the incident is typical of this weekend's events. The Greeks have been tripping all over themselves trying to be, some would say, uncharacteristically, polite, lest anyone think them rude because the elegant new museum is also a cultural and artistic reproach to the British Museum. Actually, in the mood of this opening weekend, it's more a subtle invitation for the trustees of said museum to return what have hitherto been called the Elgin Marbles, the sections of the Parthenon frieze that Lord Elgin had hacked off the Parthenon temple and shipped back to England in the early 1800s, a time when avaricious art lovers took what they liked, slipped said artifacts into their storage crates while on the Grand Tour, and carried them off to the imperial powers from whence they came. ("But he had permission from the Ottoman overlords!" the British museum trustees might point out. Which was true at the time, but does that make it right? Lots of things are legalized by occupying powers, including the deportation and extermination of unwelcome ethnic groups. But to dwell on that thought would make some people feel bad on behalf of their genocidal ancestors, and not be in the spirit of this weekend.)

The top floor of the Museum, a glass cube with views of the Parthenon temple atop the Acropolis hill on one side, Pnyx Hill on the other, and the modern city of Athens on the remaining two sides, is devoted to masterpieces that once resided on the Parthenon, including the famed "Parthenon frieze", over half of which is now in the British Museum, since Lord Elgin, having lost his fortune and his wife, and acquired the sort of 19th century rich man's infection that led to the removal of his nose (no offense meant to any descendants of Lord Elgin, or, of course, British PM Gordon Brown), sold his finds to the Museum. The frieze is a visual narrative which tells the story of the Birth of Athena (and, in other sections, the battle between Athena and Poseidon for spiritual control of the city -- not to offend any followers of Poseidon who may be hurt by the memory of their loss). For the first time since Elgin's adventure, an attempt is being made to show it in its entirety, with casts of the British Museum segments interspersed with originals that Elgin allowed to remain on the Parthenon.

The archaeologists leading journalists on a press preview tour of the gallery last night pointed out that the copies in the reunited frieze were gifts from the British Museum trustees back in 1845, when the new Greek government first asked for the return of the marbles. The trustees refused, arguing that the marbles were safer in Britain (until the birth of the new state, the Turks had been using the Parthenon to store gunpowder, after all, and if Prime Minister Erdogan is reading this in between tending to urgent business, my apologies for being so crass as to mention it). After that argument went up in smoke, the trustees argued that the British Museum could preserve the marbles better than Greek officials (also true at the time, or at least until 1937 and 1938 when the British Museum tried to reverse the effects of pollution from burning coal by treating the statues with bleach, wire brushes, and chisels). As the last century drew to a close, the only argument for keeping the marbles (besides the always effective "finders, keepers; losers, weepers") was that the Greeks had no suitable place to display them.

The New Acropolis Museum is the eloquent answer to that; the marbles would be shown as part of the narrative their creators intended, in view of the temple they once graced. And the entire museum is site-specific; all of the over 4,000 findings come from the Acropolis hill. In this way, the entire museum is a request for the marbles. But the issue is not raised on site, there is no editorializing in the museum plaques, no petitions guests are asked to sign, no snarky comments by the guides ("the original is...you guessed it! In the British Museum!"). New Acropolis Museum officials seem to have been following a policy of speaking softly and carrying a big museum, as Museum Director Dimitrios Pandermalis told Newseek, "We are presenting in a visual way, what was, to this point, a verbal discussion."

At least until last night, when the Minister of Culture, Antonis C. Samaras, in a speech to reporters said, "We cannot dedicate this magnificent new museum with full hearts. We cannot illuminate fully the artistic achievement created in fifth century Athens because almost half of the sculptures from the Parthenon were taken from here 207 years ago to reside in enforced exile 4,000 kilometers away."

At which point an American reporter behind me muttered, "Holy Shit." The Elginphant in the room had finally been mentioned.

Even so, the minister of culture made the point that this wasn't a personal or national issue, but an artistic and moral one, insisting that, "The abduction of these sculptures is not only an injustice to us Greeks but to everyone in the world, the English included, because they were made to be seen in sequence and in total, something that cannot happen as long as half of them are held hostage in the British Museum."

A strong point, and also a rebuttal to the argument that the return of the marbles would unleash a torrent of requests from once impoverished or occupied countries who want their treasures back; the Parthenon marbles, to use the politically correct term, are a special case, a visual narrative from a particular site that now has the means to display the story where it was created. 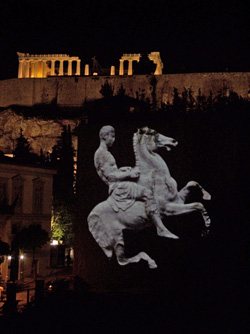 Samaras quoted the former Met director, Philippe de Montebello, who, when he returned eight dubiously acquired works to Italy, including the Euphronios vase, in exchange for a continuous stream of treasures the Italian government would loan to the Met, said, "The word is changing and you have to play by the rules. It now appears that the piece came to us in a completely improper way...as the representative of an honorable institution, I have to say, no, this is not right."

At which point the reporter from Palm Beach Society, offering the American perspective, muttered to a colleague, "It would just be such good P.R. for the British if they gave them back!" But the best the British government has done so far is to offer to loan the marbles to the New Acropolis Museum, in exchange for the Greek government's acknowledging that the British Museum trustees own the works. (Apparently, in the post-imperialist age, words are the new hatchets.) It was an offer the Greeks could only refuse.

I realize this blog, with its judgmental tone and quaint belief in right and wrong, is not in the polite spirit of this weekend's events, and I'm a little concerned I might have to give my commemorative New Acropolis Museum bookmark back. But I can't go along with the "it's the spirit of the times, it's not personal," party line, because I saw just how personal the return of the marbles could be as I researched articles about the New Acropolis Museum last year. Their return would be a feather in the cap of the new minister of culture, Antonis Samaras and a huge coup for Bernard Tschumi, the museum's architect. (When I interviewed him in New York, he said that one of his challenges in designing the site was that "the building had to be good enough to convince the world, and especially the Brits, that the Elgin marbles should come back.")

But there is one man whom seeing the Parthenon Frieze together would thrill more than anyone else. When the museum's Director, Pandermalis, showed me around the museum-in-progress last summer, the eightysomething professor practically danced around the freestanding archaic statues that had been wall-mounted on the old site. "I've been an archaeologist for 68 years, and I've never seen the back of this woman's hair," he gushed. When I told him that Mr. Tschumi is confident that the marbles will be returned eventually, he replied, "So do I. But will I live to see it? Or will it be left to your generation?"

At the risk of being forward, the fulfillment of one scholar's lifelong dream seems to me to be as strong a reason to return the marbles as righting old wrongs and restoring ancient artworks to their entire, original state. So I urge the British Museum trustees to give the marbles back and let Mr. Pandermalis see his frieze reunited. It would be rude not to.