Every morning, I send my husband off to work with a packed lunch and a kiss. While my husband's at work, I spend my days making block towers, sweeping up Cheerios and continuing the absolute endless cycle of laundry. I wear a frilly apron while I cook and bake, which I love to do. I love to craft. I live in the suburbs.

And I'm a feminist.

What? You expected feminists to be a little more Pussy Riot and a little less Carol Brady? You're not alone. The overwhelming success of the Women's March put feminism back en vogue, while anti-feminists resurrected cringe worthy stereotypes that feminists are anti-family man haters. This myth is not only comically inaccurate; it perpetuates a negative stigma that hurts our cause.

Hurting our cause and impeding feminist progress is exactly the goal for anti-feminists, so they promote these stereotypes because it's the only card they have left to play.  Think about it--they know most people believe in feminism so they can't simply chant, "Aurgh! Women aren't deserving of equal rights and men are better in every way!" So they resort to the cheap shots-- stereotyping feminists in this lame us vs. them dichotomy. Those who demean feminists are feeling threatened and are not exactly skilled in the art of factual debate.

After the hugely successful Women's March, many women quickly sought to separate themselves from the movement as well, declaring "Not my March!" The truth is-- it doesn't have to be your march. Across the globe from our nation's capital to tiny towns to Antarctica, millions of women marched. Millions! It was the largest protest in the history of the United States. For many of us, we marched for ourselves and it felt good.

As a mother, I fit right in as a feminist at the Women's March. The values affecting my own and millions of other American families were clearly represented:

I don't believe in these principles because I'm a liberal, Democrat or feminist. I believe in these issues because I possess a certain level of common sense and human decency. I marched with my own mother surrounded by strong women whose voices demand to be heard. We're not backing down because a few knuckle-dragging Neanderthals on the Internet called us names.

The spirit of the Women's March and feminism is inclusive, compassionate, patriotic, supportive and powerful. It's not about division, attacks or hurling insults at others. We may be nasty women in terms of our anger, passion and perseverance. But we're not mean, hateful or vindictive. Don't believe a false narrative that tells you otherwise.

Feminism is not a dirty word. If you believe in the radical notion that women are people, you can sit with us. The Women's March was only the catalyst for a much bigger movement and it's just begun.  History has its eyes on you and no matter who you are, it's not too late for you to join us. 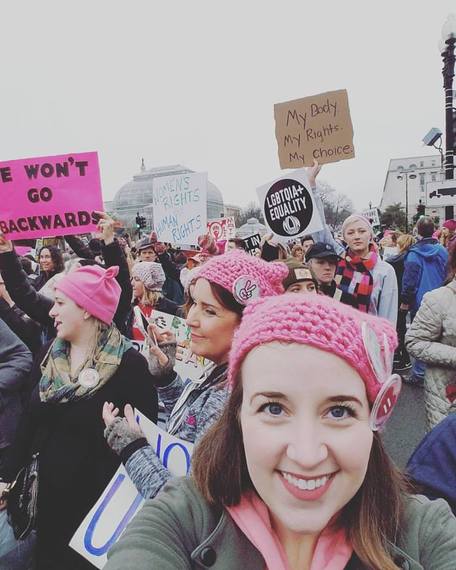