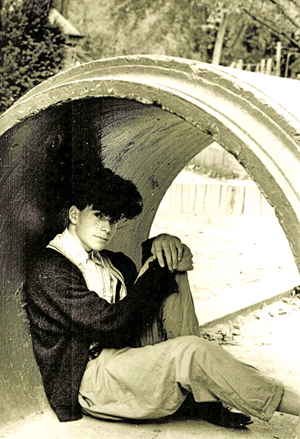 Like Mitt Romney, I attended Cranbrook, the elite, Detroit-area private school. Unlike the presumptive Republican presidential candidate, I was not the rigidly straight son of a sitting Republican governor but a scholarship student, a political radical, and a burgeoning homosexual. But like John Lauber, the highly-publicized object of Mitt Romney's teenage scorn, and the victim of a violent assault led by Romney during the end of his high-school years, I wore, as a proud symbol of my outsider status, a distinctly non-normative hairstyle, or, rather, a constantly evolving series of outré dos that conformed to no known style, save my incompetence with the clippers and my desire to provoke.

Long and unkempt on top, cropped to the skull around the sides, occasionally sporting some or another slogan or symbol shaved into the back, my hair drew attention. The mother of a close friend described it as "appearing as though it wants to spin off your head." Fellow students described it as "gay," sometimes derisively, sometimes in packs, while pointing. A favorite English teacher pulled me aside one day and gave me some advice -- impossible for any teenager, whose developmental goal is the externalization of that which can't yet be internalized. "Brett," he said, "don't let your body be a pedestal for your haircut." (It should be noted that there was a barber on campus. I never visited, but I walked by his basement shop more often than could be ascribed to coincidence.)

Cranbrook nurtured me at a time when my home life was imploding. My parents had divorced just before I started high school there. My mother worked far more than full-time and, being only in her mid-30s, dated quite a bit, as well. My father remarried a born-again Christian woman who insisted that he renounce his previous family, and he complied. Though I was a day student and didn't live in the dorms, my school, and my friends and teachers -- the whole, insular world of that beautiful, self-contained campus -- became my home and my family. With its focus on both the arts and the liberal aspects of its liberal-arts heritage (the school also hosts on its grounds a renowned fine-arts graduate school), Cranbrook introduced me to the transformative power of sculpture, ceramics, and especially writing. (I never would have become a writer, or even thought it possible as a vocation, without Cranbrook.) It also helped guide me toward a lifelong connection to issues of social justice. It was with a Cranbrook teacher that I joined my first protest group and attended my first activist meetings.

I'm planning on attending my 25th high-school reunion at Cranbrook this June, the first of any such official gathering I've intended to join. At that event esteemed alumni will receive awards for their accomplishments; from what I've read, one of my classmates helped found Groupon and will be delivering a keynote and receiving a plaque. Mitt Romney was granted this honor in 2005, at his 40th class reunion. I have not seen or read any statement from Cranbrook on the recent revelations regarding Mitt's reprehensible behavior when he was a student there, but I trust that the institution that I love, and that so shaped my identity (and continues to do so for an incredibly diverse range of students), will have something wise to say.