Immigration is always a hot-hot topic - especially in the presidential election campaigning season. Certain candidates are engaging in the age-old tactic of scaring the electorate with the "dangers" that all immigrants pose --claiming they own the solution to the problems.

For the sake of our national good, we need to turn the tables on this "business-as-usual" scaring practice and switch to positive action. That means: first, leveling the playing field for talented immigrants to help them integrate and contribute to our country's well-being; second, explaining to would-be immigrants that America isn't easy and they need to make countless steps to succeed.

Let's start by acknowledging that America is not really a Garden of Eden, and things can go wrong even for the native-born. But for those dare-devils who seem to have reached the end of the rope and need solid immigration Rx, it includes:

Women-immigrants may need Rx in its maximum strength version, because it's common knowledge that our fair country is not always fair to the fairer sex. Let's go for it!

Big Picture: Trumping vs. Obamacaring Here's the big picture that both immigrants and would-be immigrants need to keep in mind.

Two contrasting attitudes that hinder or help the migrants to the United States can be roughly branded as "Trumping" and "Obamacaring."

Trumping the immigrants is trying to reduce even the legal immigration population and say No to more refugees.

Obamacaring (with respect to immigrants) means supporting the comprehensive immigration bill in the legislature - stopping illegal immigration in a public-spirited way - plus displaying support to EU with accepting a fraction of their huge refugee wave--facing the uphill battle in Congress.

Discouraging as it is, that's what our big picture looks like. Take it or leave it, but think before you leap.

Here's where this Rx came from: I've interviewed 50 prominent immigrant women for my book on success in the US - trying to identify the core commandments and behaviors that enabled them to make it in America. Here are several of them.

At age 34, when a terrible tragedy made her a widowed mother of three, Sophie had no alternative but to move on with her life. Today, a corporate vice president, chief technology officer at Xerox and the president of Xerox Innovation group, Dr. Sophie Vandebroek (pictured) leads one of the best industry research labs, with locations around the globe. Holding 14 US patents, she was inducted into the Women in Science and Technology International Hall of Fame for her personal achievements - no small accomplishment. 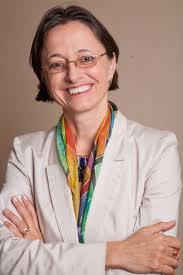 Her ascension up the corporate responsibility ladder looks breathtaking and almost too good to believe--given the struggle that most women face in the engineering profession. Sophie's secret of success resulted from her winning combination of strong character, creativity, and perseverance. When backed into a tight corner of life, she continued to tenaciously cultivate them and came up with a set of strategies and tactics which can be called a frugal innovation in a work-life balance field. It may be more important for the world-at-large than all her patents--because following Sophie can help scores of other women to become work-life rainmakers, like her.

Sophie's is a story of a family-oriented woman with a beautiful mind which created a holistic, multi-component balance that allowed her children and her career to flourish profusely. This is why she is a role-model to remember.

At age 15, this passionate poetry paramour dreamed about going into engineering for a career. Today, Hoda Eldardiry, Ph.D., (pictured) is a research scientist at Palo Alto Research Center (PARC), a Xerox Company, in artificial intelligence, machine learning, data mining and knowledge discovery. She also serves on the Xerox Innovation Group Women's Council and is active in the US high-tech community. 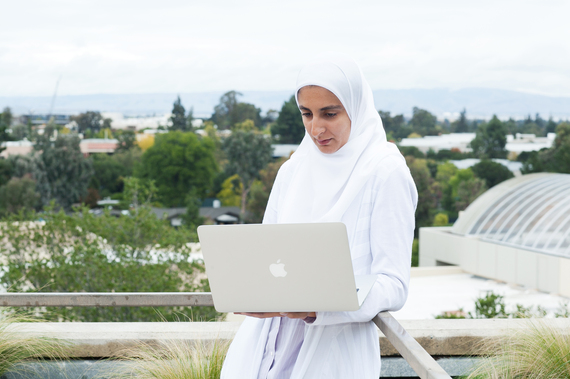 A mother of two amazing boys, whose hugs and laughs are her major source of happiness, she manages to make the time for activities she enjoys, including volleyball, horseback riding, jogging and poetry. It's indeed something of a miracle: we see a pretty woman from Egypt come to America and pursue education on her own, despite all odds -- cultivating her ever-strong character on the go. This is possible in America, where resilience on the road can pay off big time.

It was her almost-supernatural ability to persevere that let her to pull it all out: growing two sons, defending her Ph.D. at prestigious Purdue University and finding a dream job.

I'll be always grateful to Sophie Vandebroek who recommended including Hoda into my book--and I'm confident that Hoda Eldardiry will make a great role model to those who aspire higher and strive to make it in America from scratch.

A gendered approach to immigration issues is long overdue. For centuries, immigrant women have been a blessing for America - which nobody can deny, not even Donald Trump who's been happily married to two immigrants, Ivana and Melania.

The lessons that successful immigrant women communicate: bring your ambition and talent to the US, the right place to seek success--but remember to follow in the footsteps of role model achievers, adopting the daily use of immigration Rx. The powerful mix of character-building, creativity and perseverance will make you unstoppable! Share it with others!