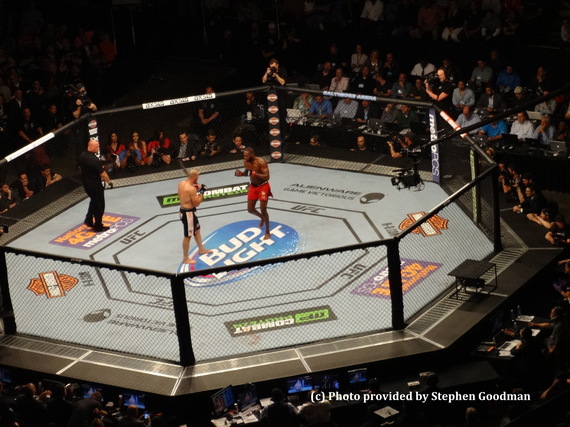 Immediately after UFC champ Jon Jones defended his light heavyweight title last Saturday in Baltimore, Jones, a Christian with a tattoo on his chest reading "Philippians 4:13" (I can do all things through Christ which strengthens me) kissed a forefinger and pointed toward heaven -- or, depending on your secular versus religious leanings, toward the incandescent arc of the cage's klieg lights.

"All glory be to God," he told the pay-per-view audience. "Forever and forever, he reigns forever."

Moments later, before answering questions from UFC broadcaster Joe Rogan, Jones gave Christianity its usual post-fight shout out: "First and foremost I want to thank Jesus Christ my Lord and Savior. Without him I would be nothing."

Great athletes -- and Jones is without question a remarkable MMA fighter -- frequently give credit to God or Allah. On Saturday's pay-per-view main card three of the five winners (Jones, Anthony Johnson and Max Holloway) immediately credited God or "my Lord and Savior" for the victory.

Although I feel certain that neither the Christian God nor his son aka Savior favored any one fighter in Saturday's various beat downs, I believe that Jones is absolutely correct. Without his belief in a personal connection to a higher and omnipotent power, Jones, as well as other superstar athletes who say they are anointed with God's blessing, would not perform in ways that appear otherworldly.

However, the same might be said of my devout belief in Winnie the Pooh. I was born the same year (1961) that the rights to Winnie the Pooh were licensed to Walt Disney Productions and, in no time, Disney had worked its magic. I became a believer. Chubby, benevolent Pooh, always dressed in a preshrunk red shirt (or was it an ill-advised midriff?), battled an insatiable appetite for honey. With my weakness for peanut butter fudge and my mom's early attempts at sewing our clothes, I related. Like our refrigerator door, Pooh was a light in the dark. Even though he had it far rougher than I did, god bless him, he maintained a sunny disposition. He could be naive (I just thought of him as innocent) or slow-witted (understated and modest, I suspected) he developed a massive following, earned billions of dollars for Disney, and, unlike the most heavily perfumed girls in high school, he attracted more friends than bees. Tigger stalked him; Piglet adored him; Christopher Robin was loyal and steadfast.

Yeah, yeah, I know: What in God's name does this have to do with Jon Jones kicking Glover Teixeira's butt?

Wow, really? Pooh was also patient. He taught me to listen without interrupting. And if, say, my parents had dragged me to a sanctuary every Sunday where we sang hymns in praise of Pooh and listened to robed men yammer on and on about Pooh's miracles and Pooh's wisdom ("Some people talk to animals. Not many listen though") and Pooh's unconditional love for humanity, I might also believe in Pooh's omniscience, omnipotence and benevolence.

If, then, I believed that this same power were in me as sure as the blood coursing my veins, I might be able to relax to the point where I could compete with no self-doubt and no fear -- utterly comfortable in the belief that the almighty Pooh is in me and will watch over me even as the heavy fisted Teixeira is trying to separate me from consciousness. As long as I am living by the lessons of Pooh and treating others as he did -- e.g., as I would want to be treated myself -- then maybe the Power of Pooh would be mine.

And it is. It always was -- no matter if I pledged Protestant, Catholic, Muslim, Jew, Hindu, Buddhist, Pagan, Atheist, Agnostic or Pooh. When I truly believe that the power of the universe resides within me (this belief waxes and wanes apparently) I act in such a way that I am able to tap it. Jesus or the Buddha or Winnie the Pooh, these are merely conduits for the almighty energy that lies in wait.