Residents in Bangalore, India, were alarmed earlier this week when a local lake caught fire. For several weeks, Bellandur Lake has been covered with several feet of toxic foam that some have said resembles snow from far away, according to The Hindu. Beneath the snow-white lather, the water has turned black from chemicals and sewage. 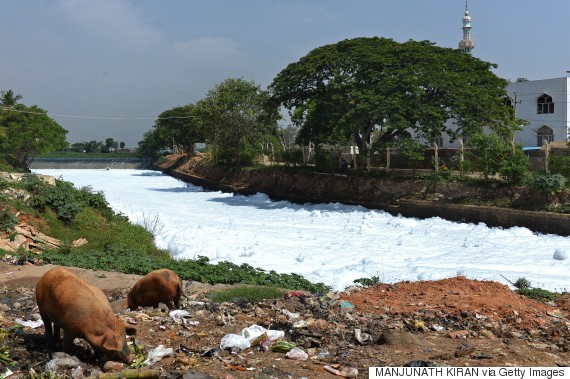 A canal that once carried water from Bellandur Lake to Varthur Lake is filled with toxic foam.

The foam apparently caught fire last week, burning for most of last Friday night, as seen in a shocking video recorded from its banks, the Bangalore Mirror reported. Experts told the outlet a slurry of oil and phosphorus from untreated industrial waste and sewage likely created the conditions for the combustable cocktail to ignite. Areas of nearby wetlands that had helped to filter the lake in the past were destroyed by development.

"These wetlands used to act as purifiers. But all such wetlands surrounding the lake have been encroached and there is no place for natural purification. Hence the pollution at these lakes is uncontrollable," an unnamed officer for the local pollution control board told the Mirror.

Apart from the alarming, positively hellish prospect of a lake of fire, residents have also reported allergic reactions and a burning sensation possibly caused by toxins released by the foam, which caught fire again on Monday, according to The News Minute. The froth has swelled to a height of as much as 12 feet due to recent rains, and has spilled over the banks of the lake.

City officials have called for an investigation into the rampant pollution, which is also noticeable on another lake nearby.