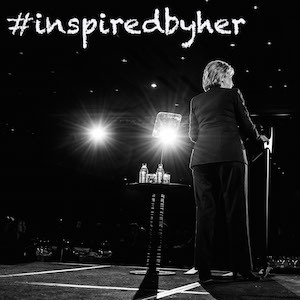 I heard it in 2008 and hear it again now --this notion that the only reason one would support Hillary Clinton is because she is a woman -- or only because she is experienced and smart. She is all of those things. But I am with her because...

Watching Hillary talk policy moves me. She doesn't speak in euphemisms or generalized outrage. When she answers questions in debates and interviews, her command of the issues is evident. She knows every fact, listens to every viewpoint, has considered every contingency, and formulated a plan. She does so on such wide ranging topics from immigration reform, to vaccine development, to climate change, and beyond. That doesn't take just smarts, or work, that takes passion and decades of dedication.

Following Hillary's fight amazes me. When they told her in 1995 not to go to China and talk about human rights--she talked about human rights. She stood in front of an international crowd in Beijing and boldly said "it is no longer acceptable to discuss women's rights as separate from human rights". When others shy away from issues like sexual violence, female genital mutilation, and family planning--she made them inseparably linked to our national security.

Seeing Hillary in action gives me the same feeling of joy, amusement, delight I get when seeing Sia Furler performing 'Elastic Heart', Marvin Minsky talking about artificial intelligence, Serena Williams playing tennis, the Lonely Island introducing a digital short. Like these small joys, she makes me feel the world is a little bit better because she is in it.

To me, Hillary Clinton is a rockstar, a genius, a badass, one of the most original and extraordinary human beings around. And #imwithher because I am so deeply #inspiredbyher.