Steve Dalachinsky: This particular book is a departure from most of my other work, and was at the time of its first publication in 2000 the largest book I had out. It was a limited edition of 300 and contained prose, poetry, prose poetry, the Japanese form of haibun which combines prose and haiku and some of what Kerouac would call "prosody." The main inspiration for that and this newly expanded edition was my job as superintendent of my building and all the craziness and chores that it entailed. The concept expanded to incorporate older pieces from the 60s and in this newer, larger version, recent pieces which seem relevant to the work. I am extremely pleased that Ron Kolm, Jim Feast and Jim Fleming of Unbearable/Autonomedia Books were willing to take on this enterprise. The use of Arthur Kaye's photos followed the pattern of the photos in the first edition but also expanded on that idea to add a very REAL and needed dimension to the work. 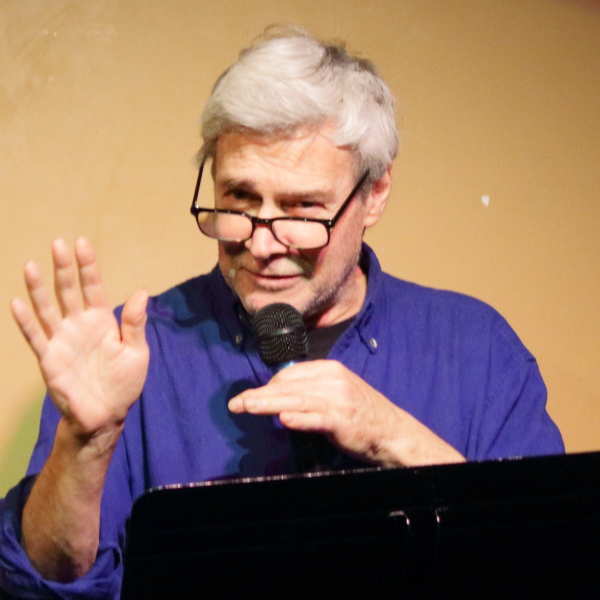 Lisa Chau: Which is your favorite poem and why?

SD: There are so many varied pieces in this book -- Close to 100 different pieces -- It would be hard to choose one. But I love the poem/letter to a dear friend Julien, and one called the gamble and another about a homeless man who had slept in the hallway and left behind a poem. There are too many diverse textures and stories in this one little volume that it really is hard to choose.

LC: What did you add to the current addition?

SD: I added about 50 episodes both new and old. As I said earlier, I felt I added to the flavor of the original by the nature of their feelings of isolation or intention. As I stated, some of the new additions were written recently, specifically for the book even though I am no longer the super. However, the majority of the added "eyes" were either from around the period of the first edition, and in some cases as with the first book went as far back as the 60s. Some had no real connection to my job but seemed to fit in perfectly with my life then, and in some cases now. Though I am no longer the super, I still live in the same overcrowded messy shoebox of an apartment.

LC: Tell me about your collaboration with Arthur Kaye. What was the creative process?

SD: The process was wonderful. After he came over and examined the first edition, I asked him to try duplicating some of the photos in that book as best as he could, but to also, of course, use his eye and make them fresh. For the most part, it was a new experience for him as a photographer because his shots were guided by my suggestions regarding specific pieces in the book. This worked splendidly . We had virtually no conflicts when dealing with the photographic process, and when we made final selections we always included Ron Kolm, the editor and my wife, Yuko. A lot, if not all the decisions were based on unanimous choices and there was very little, if any, conflict. Art and I worked great together because we both worked off the text, which in a way, was an independent entity. The work said, "DO THIS," and we obeyed, like with the great centerfold. I said to Art, "This is not in the first book but let's have this centerfold based on the TV references and Voila! His poetic shots came through complimenting the text at all times."

LC: Have you kept in touch with any of your former residents?

SD: Not really, though four or five that are mentioned in the book, including, of course, the landlord and his daughter are still in the building. There is a section near the end of the book that updates the present tenant status, though, with gentrification this sometimes changes monthly.

LC:Why is poetry your preferred style of literary expression?

SD: Well, I don't know if I'm any good at it, but it seems to be what I do best and most naturally, like talking. I do write a monthly column for the Brooklyn Rail, and as well as many straight and poetic liner notes for CDs - so, it has become a bit easier to express myself in prose, but poetry is looser as a form. Less taxing, less demanding, more adventurous. One can get away with a lot, though. In this particular book, as I have already stated, much of the work is prose oriented. It just happened that way because many of the poems in the book are about stories both real and surreal. I also do a lot of collage now. More than ever. Story and poetry combined -- total surreal narratives.

LC: Tell me about your collaboration with musicians and your own musical repertoire.

SD: This started almost by accident due to my interest in music, and because from the 80s on, I spent so much time in small venues listening to live music, primarily Jazz. As I started reading more in public, I had become friendly with many musicians in the 80s. Some asked me if they could play with me. In most cases, I asked them. Sometimes it works, sometimes it's a dismal failure. It's always challenging, and the results have been very fruitful, bringing many rewards such as gigs and at present at least eight or so CDs -- many of which I am never quite happy with (my performance) but which have been unique. My latest effort is with the great French bassist, Joelle Leandre, and by the end of the year, I'll have one out with saxophonist, Dave Liebman, a childhood buddy and the extraordinary Richie Beirach on piano. This session was very frustrating and I thought could not be saved, but a great sound engineer that Dave suggested stepped in and saved the day. The album has some truly magical moments.

LC: Have you ever collaborated with your wife, Yuko?

SD: Yes, only three or four times. She finds collaborating with me very difficult. We have only done two poems together and two visual art pieces. I would love to do more but it becomes very frustrating just as our lifelong collaboration in life is: Frustrating but fruitful. She is a great poet and artist deserving of much recognition.

LC: Who are your inspirations and why?

SD: Ah, too many to name! Let's say Blake, Lorca, Ginsberg. Other Beats: Kafka, Camus, Baraka. So many more, as well as visual artists and musicians: Coltrane, Dolphy, Monk, Mingus.

Why? Mainly because they are challenging and have challenged the limits of their art -- craft of sound, of space, of hardship and personal limitations. Beethoven's deafness during the production of his late string quartets are a springboard for a lot of 20th century innovators like Shoenberg, who in turn is a springboard for Eliot Carter.

Charlie Parker, Monk, Coltrane, Miles Davis, Eric Dolphy and Ornette Coleman are all unique voices that contributed and inspired many others. Individual style. Sound is rare. Pioneers all. There are folks who make their mark but do not have personal voices as well -- those that I have just mentioned DO. Of course, there are others I could name as well.

Music is in everything, as is poetry.

LC: What are your next project(s)?

SD: I have just finished the two CDs I mentioned and I am working on a long fragmental piece. I also have several manuscripts of various sizes ready to be published but cannot at present find takers. They are short and contain visual art by other folks. I have finished several recent collage projects and have a bunch of readings coming up. My main project is to live as long as I can (I'm 66) and just keep seeing, hearing, tasting, touching, smelling and producing as long a I can.