A series of graphic photos reportedly depicting the public amputation of a convicted man's fingers in Iran have been released to the public.

The pictures show the amputation of a sweatsuit-clad prisoner's finger. The man was convicted of theft and adultery in the southwest city of Shiraz, according to state news agency ISNA.

In the images, the blindfolded man is led to the machine by a trio of masked and hooded officials. As two officials hold his arms, the third inserts his hand into the machine.

According to France24, the man had been sentenced to three years in prison and 99 lashes.

Mahmoud Amiry-Moghaddam, a representative for Iran Human Rights, told France24 that the photos -- whose authenticity could not be independently confirmed -- may be a governmental scare tactic in advance of the upcoming presidential elections.

"We have noticed that the authorities have recently being making more and more publicity surrounding cases of corporal punishment," Amiry-Moghaddam told the news outlet. "Every time we get closer to an election, the number of these incidents increases. And we’re getting quite close to the presidential election [slated for June]. I believe this is a strategy to instil fear in the population so as to avoid any protests."

The city's district's public prosecutor, Ali Alghasi, warned that criminals under his jurisdiction should expect increasingly strict punishments, according to The Telegraph.

In 2008, the Iranian ambassador to Spain defended his country's use of amputation as punishment, saying amputations were akin to stopping the spread of gangrene in Persian society, The Telegraph reports.

"Our laws allow for the amputation of the hand that steals. This is not accepted by the West, but the field of human rights should take into account the customs, traditions, religion and economic development," Seyed Davoud Salehi said at the time.

Meanwhile, human rights groups have warned of an escalation in the number of public punishments in Iran.

Last week, a pair of men convicted of mugging a man at knife point. The victim was uninjured, the Los Angeles Times reports, but the men were hanged -- without blindfolds -- from a pair of cranes in Tehran.

Amnesty International released a similar video of one such hanging in 2011, where three men were hanged from an overhead bridge in front of a crowd of people. "What is so alarming about this video is the apparent normality of the event. Thousands of people are watching as if it were a football match. People are shouting and cheering. But what is most shocking is the participation of children in this barbaric 'spectacle'," Iranian human rights activist, Fazel Hawramy told The Guardian.

WARNING: This slideshow contains graphic images that may not be suitable for all readers. 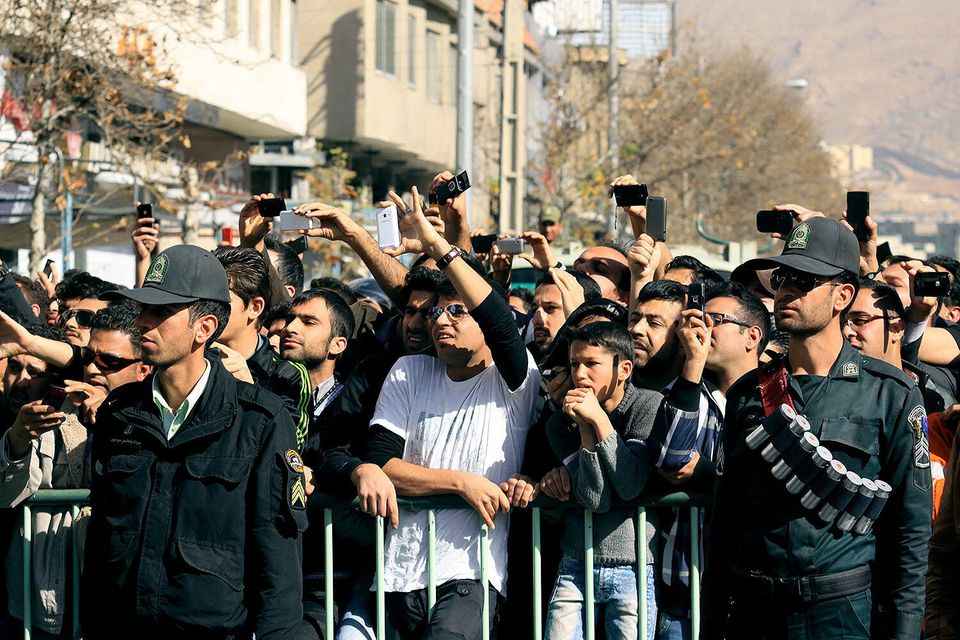 1 / 8
Iranians take photos with their mobile phones of authorities carrying out the court-ordered amputation of the fingers of a convicted thief, not pictured, in a public square in the southern Iranian city of Shiraz Thursday, Jan. 24, 2013. AP Photo/Mohsen Tavarro)
AP