Come on, Iran. You talk big game. You totally want nukes, and you've got a lot of people worried. You should at least have the PR skills to back it up: This bad photoshop is a Borat-caliber farce.

When you unveil a shiny new war toy like the Qaher-313 fighter jet, it's your right as a player in world politics to flaunt it. Not to spark an international incident, but given how scary North Korea has been acting recently, it might not be a bad time to step up your game.

And seeing how some have raised doubts as to whether this newly minted, indigenous warplane can perform tactically (though from this footage of the Qaher-313, it looks as if it can at least fly), perhaps it might be worth the trouble to take a proper publicity photo of it.

Instead, someone -- not necessarily in an official capacity -- thought it would be a good idea to Photoshop a Qaher-313 onto a stock image of Mount Damavand, so that the jet merely appears to be flying.

SCROLL FOR COMPARISON WITH STOCK IMAGE

The Atlantic Wire pointed out the gory details of this quickie collage and even delved into a brief institutional history of bad Iranian defense Photoshop. (This is to say nothing of the allegations that Iran's recently launched space monkey might also have been a hoax.)

Having learned from [past] blunders, the Iranians seem to have learned not to put an extra plane into their photo and also learned the very important lesson not to take someone else's picture and just edit out windmills. And props to using Mount Damavand — that's a local landmark.

While nothing strikes terror into the heart of a subreddit like bad Photoshop, getting sleuthed by a blogger is not exactly becoming of a world power, even if it turns out the image didn't come from Iran's Department of Defense. 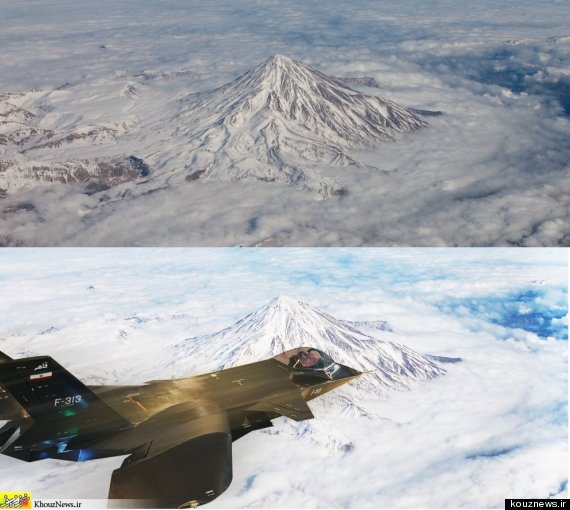