The latest news from Paris is cautiously optimistic that we will have an agreement by Friday. What does it mean for agriculture and food security? Although the French government has shown great leadership championing agriculture at COP21, it is not yet really on the table for the negotiators.

As Tim Grooser, Climate Minister of New Zealand put it: "After many years of banging my head on a brick wall, trying to get attention for agriculture in UNFCCC, we are finally being heard". While this is unlikely to have a big impact on the result in Paris on Friday - it paves the way for more progress to be made in Marrakech at COP22, next year, via scientific (SBSTA) meetings held in Bonn in June 2016.

One of the most promising new ideas at the Paris climate talks so far, is the French government's "4 pour mille" initiative. The name 4 pour mille (or 0.4%) refers to the annual increase in soil carbon, which would offset atmospheric carbon emissions. As the carbon reservoir in the soil is two to three times larger than all the carbon in the atmosphere, the initiative focuses attention on the huge potential agriculture has to become a critical part of climate change solutions. Agriculture and forestry alone can capture carbon from the atmosphere through photosynthesis, and sequester it in the soil.

Increasing soil carbon not only mitigates climate change, it also increases - or restores - soil health and fertility, thereby helping agriculture to adapt to climate change and improve environmental health overall. Yields will go up, farms will be more resilient, and emissions will be reduced as a co-benefit.

The private sector has made commitments in Paris aswell. A coalition of companies joined together under the umbrella of the World Business Council for Sustainable Development to focus on low carbon agriculture solutions. Monsanto has announced that its operations will be carbon neutral by 2021, in just 5 years. John Bryant, the CEO of Kelloggs, went a step further in Paris by not only committing to carbon neutrality for its own operations, but also to work with farmers in its supply chains to make half a million farmers climate smart.

A proposal for the developing world

In Paris CGIAR announced a $225 million proposal that would take climate smart agriculture and 4 pour mille to seven developing countries: Ghana, Senegal, Tanzania, Uganda, Vietnam, Nepal and Colombia. Farmers will co-develop and share widely climate-smart interventions that boost the levels of carbon captured in soils, such as conservation agriculture, agroforestry and improved forage systems. In those seven countries we estimate that farmers would be able to improve their agricultural yields by 20% and offset greenhouse gas emissions by 15% or 25 megatonnes of CO2e.

This will contribute to CGIAR's own commitments to work, with partners, to reduce agriculture related emissions by 0.8 Gigaton, or 15%, by 2030, restore 190 million hectares of degraded land, save 7.5 million ha of forest from deforestation, and increase water and nutrient efficiency by 20%. 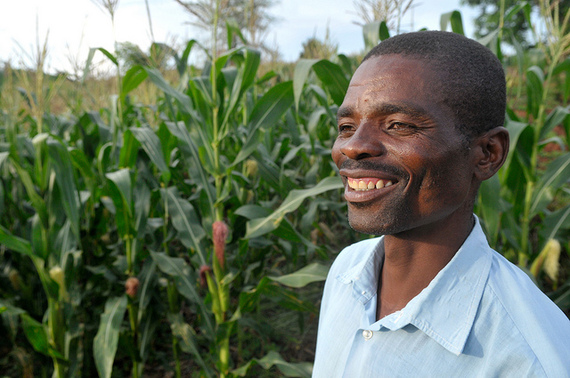 Conservation agriculture relies on several principles: minimizing soil disturbance, maintaining soil cover and practicing crop rotation. A farmer can realize an average yield increase of some 300kg per hectare in cereal yield by combining these approaches, and on the soil and local conditions, can increase organic matter in soils significantly. Ongoing CGIAR research is increasing our understanding of the mechanisms and conditions that affect the amounts of carbon captured in soils and the ability of soils to retain this carbon over time.

Agroforestry can also make a significant difference. It is a form of inter-cropping that dedicates a share of cropped areas to trees. The most promising results in agroforestry come from the integration of Faidherbia albida trees, an indigenous African acacia, with food crops such as maize. These trees improve soil fertility by drawing nitrogen from the air and transferring it to the soil through their roots and shed leaves. This is being applied to several millions of hectares in Africa, for example in Zimbabwe, where crop yields can increase by 30 percent and sometimes more.

The 4 pour mille initiative aims to demonstrates that agriculture can be a critical part of the climate change solution for adaptation and mitigation. We have to prioritize the capacity to adapt of resource poor smallholder families that have not contributed to the climate problem, but are the most vulnerable to its impacts, to ensure their access to healthy and affordable food. We need to ensure there is gainful employment for a new generation of African youth entering the labour market with few other options outside the agri-food system through climate compatible agriculture. And we can do so while developing low carbon, or even carbon-neutral farming systems.

While agriculture and food security are the buzzwords at COP21 in Paris, and the door is now open, we have to make sure climate compatible agriculture is front and centre for the negotiators at COP22 in Marrakech.