These recent Google searches and their associated number of results clearly reflect growing concerns and public discussions around the costs of higher education and, in particular, the cost of university or college education. Shrinking state and federal budgets continue to mean students and their families are paying a larger share of higher education costs, often in the form of significant debt. Very naturally, if investments are larger, people and governments seek measurable returns.

While the purpose of education is many fold -- critical thinking skills, personal and cultural enrichment, a thoughtful citizenry, and more -- certainly an important goal is to prepare students to earn a living as productive citizens.

So should we be encouraging more of our students who are now pursuing a college degree to seek a technical/vocational degree? There is, in fact, a shortage of certain skilled manual labor in the U.S. In the Manufacturing Institute's 2011 "Skills Gap Report," respondents reported that about 5 percent of jobs are currently unfilled because of a lack of qualified workers. That's about 600,000 jobs in an economy where unemployment is high, so it is significant.

Consequently, some of these jobs have become very high paying: A recent Wall Street Journal column cited welder positions that pay up to $200,000 salaries. So it's tempting to advocate, as the WSJ columnist does, that we turn from investing in college education to investing in tech or trade schools -- and the 1.1 billion Google search results noted above suggest that many more are doing so.

But Not So Fast

Manufacturers need these jobs filled, so it's a problem that needs a solution. But does that warrant a significant pivot from support for colleges and universities to support for tech or trade schools? In fact, there is much data to suggest that such a strategy may seem attractive in the short-term... but be foolhardy in the longer term.

This is not to say that technical training does not have significant value to our society and to its many graduates... because it does. This is to note, however, that a significant shift away from encouraging our population to achieve a college or university degree will be short sighted.

For one thing, while select manual labor jobs are currently paying high wages, the data is very clear that overall, a college education results in both higher lifetime earnings and more robust upward mobility. (See my recent blog post "The Great Debate: Is College Still Worth it?" for a detailed analysis.)

But demographic trends, in particular the aging of the U.S. and world populations, provide some additional interesting food for thought.

U.N. population projections include the "old-age support ratio," a measure of the number of presumably productive working citizens available to support older, presumably retired citizens. It has been declining steadily; in the U.S. it was eight in 1950, is about five today, and is projected to be only three by 2030. This change can clearly and negatively impact economic growth, health, and productivity.

The key words for the purposes of this discussion are "presumably working" and "presumably retired." U.N. analyses traditionally assume retirement at age 65, so U.N. projections are based on adults up to age 64 working and those 65 and older being retired.

What if that were not the case, and what might influence worker longevity?

It turns out that as we live longer and healthier, people do in fact retire later -- nearly 20 percent of 65-and-over Americans are now in the labor force, compared with 11.5 percent in 1992. But, doing so is directly related to education levels and, consequently, to the kind of work people are doing.

Gary Burtless, Senior Fellow at the Brookings Institute, analyzed the impact of aging on workforce participation. He found that "[a]t older ages there are major differences between the participation rates of highly educated and less educated groups, and these differences have persisted for several decades."

The chart below, from a recent article in "The Economist," shows a clear correlation: The more advanced the education, the longer workers are likely to remain in the workforce. Burtless reports that in the 90s, nearly 60 percent of 62-74 year-old men with doctoral and professional degrees were in the labor force, compared to only 20 percent of male high school dropouts. 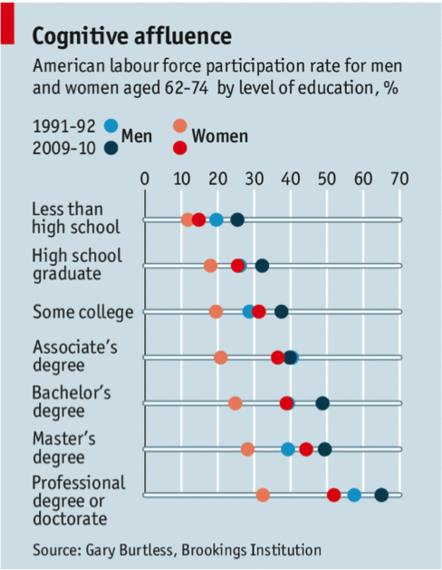 A 2010 Carsey Institute study corroborated this finding that college graduates have the highest workforce participation rates after age 65, despite most likely being in better financial circumstances to retire early. It cites a number of factors that likely contribute to this phenomenon, including better health, higher earnings potential, and simply liking the work. Another factor is the types of work they are doing.

And the type of job you choose determines, to a great degree, career longevity. A 2010 Center for Economic and Policy Research study noted, "Employment in physically demanding jobs or in jobs with difficult working conditions is a major cause of early labor-market exit among older workers." And the more educated the worker, the less likely s/he is to be in such a job: Only 17 percent of the most educated workers ages 58 and older were in "physically demanding" jobs and only 1 percent in "highly physical" jobs, compared to almost 63 percent and 14 percent, respectively, of workers with less than a high school diploma.

It makes sense: As workers age, they become less able to perform physically demanding work -- and physically demanding work presents more risk of illness and injury. A 1988 Bureau of Labor Statistics study examined workers' compensation reports and U.S. Census data to determine the effects of age and occupation on illness and injury incidents. The study found that workers age 65 and older were significantly more likely to suffer serious or fatal injuries on the job, and that occupation was most important in explaining job risk patterns: craft workers and laborers are among the most prone to injury.

As are welders. An analysis by the Center for Construction Research and Training found that between 1992 and 2008, the death rate for welders and cutters was consistently higher than for construction as a whole.

Therefore, while encouraging more students to pursue a technical degree may seem attractive for the short term, the long view suggests that a wholesale shift away from encouraging all those who can to pursue a college degree will significantly affect their career longevity and the ratio of workers to retirees... in turn, significantly hampering our nation's future economic development. As we work to solve the many serious challenges facing our educational system and our economy, let's keep our eye on the long-term and avoid rushing to short-term solutions.