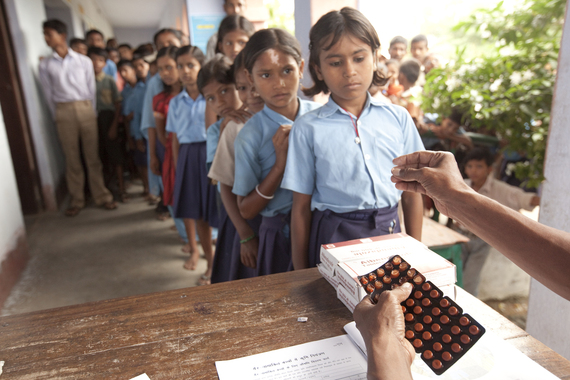 While there are many great things we could decide to do differently in 2016 for ourselves and for others, like giving blood or donating bone marrow, remembering to call your grandmother more or taking more time off work, the arbitrary nature of New Year's resolutions cannot help but give them a sense of futility. From fortunes forked out in the ambitious stage of a New Years Day hangover on unused gym memberships to failed attempts to quit smoking that rarely see the light of February, they more often represent a harmless tradition that usually only makes you feel a little guilty as you gradually revert back to previously undesirable habits.

But last year, my resolution was different, not only in that it survived the duration of the year, but also because it has fundamentally changed my principles as much as my actions.

At the start of last year, I signed the Giving What We Can pledge to donate at least 10% of all my future earnings to the most effective charities to help eradicate extreme poverty. Why?

The scale of global inequality and its implications are hardly a secret, though they are often treated as such. Over half of the world's entire economic pie is owned and consumed by so few individuals that there would still be some seats spare if they all piled onto a double-decker bus. Juxtaposed to an exclusive world of jacuzzi's and jets, however, is the fact that nearly six million children die every year from entirely preventable poverty-related diseases, one every five seconds.

Statistics like this often fail to instigate the action they warrant and require. Their magnitude renders them so incomprehensible they seem insurmountable. Their impersonal nature reduces the people behind them to mere numbers, abetting our ability to detach ourselves from their humanity.

The coexistence of unfathomable prosperity and unimaginable poverty becomes accepted as a cruel but unavoidable fact of life. But this heartbreaking waste of human potential is as needless as it is tragic.

Although most of us feel a far cry from the billionaires on that bus, we are, by virtue of being born in one of the richest countries on earth, in a position of immense individual privilege and structural power relative to the rest of the world. The average salary for someone working in the UK (£26,500) is, according to some estimates, an immediate ticket into the top 3% richest of the world's population, earning a staggering 25 times the global average.

Even after signing the pledge, the average worker in the UK would still be richer than 96% of the world's seven billion. In this scenario, however, we would also be able to fund the distribution of 639 malaria nets, combatting a disease that remains the world's biggest killer of pregnant women, or treat 3271 children for parasitic worms, the equivalent to saving one life, every single year.

But, in order to do this, we must be capable of making informed and rational decisions, of giving on the basis of good impacts rather than merely good intentions, to ensure we are doing the most we can to improve the lives of others with the finite resources we have.

A compelling example of why this is both possible and necessary is provided by a group of development economists who undertook a series of randomised control trials to determine the best ways of improving school attendance in western Kenya.

The first intervention, cash transfers to girls, did have a discernible impact, leading to an extra couple of months of schooling per thousand dollars spent. Providing free school uniforms, on the other hand, achieved an additional six years of schooling for the same price, making it over thirty times more effective. Mass deworming programmes, however, with an additional 139 years of schooling, were over seven hundred times more effective; with parasitic worms affecting up to six hundred million school-age children a year, painfully and chronically impairing their development, it is undoubtedly a leading cause of absenteeism.

What's more, during a follow-up study, children who had been dewormed were working longer and earning more in comparison to those who had not. The programme has since been launched centrally by the Kenyan government and treated 3.6 million children in its first year. Beyond the immediate health benefits, the effect it has on education and productivity makes deworming one of the most cost-effective and high-impact causes to donate to for tomorrow as much as today.

While even the most colossal fortune cannot buy you happiness, even what appears to us as the most insubstantial pocket change, can not only keep a child alive and healthy, but empower them to realise their right to an education, to dignity and to a more promising future. If we accept that every human life has equal value, regardless of how far away they might be or how different they might look, our actions can and should reflect this.

Through rigorous research and extensive evidence the quality of our giving can be enhanced considerably. While the structural inequalities underpinning this distorted system must also be challenged for their ultimate resolution, our privileged position in the world enables us to be able to make a meaningful and tangible difference to a significant number of people's lives on an individual basis as well.

Although the festive season is often one of intense consumption, it is also one of immense generosity, and we should seek to extend this to those who need it most across the world. For the second year running, this is why a large number of individuals from across the globe are deciding to make their New Year's resolution one that is worth keeping by signing the Giving What We Can pledge, and potentially saving dozens of lives over the course of our own.

Get involved: https://www.givingwhatwecan.org/get-involved/join/
Check out our Facebook Event: https://www.facebook.com/events/556956541147412/